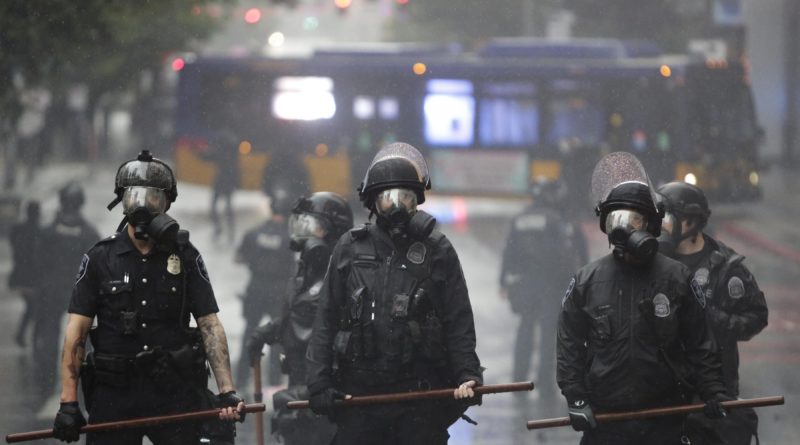 Police chiefs may have condemned the killing of George Floyd, but the actions of their officers since show that nothing’s shifted.

The day after George Floyd was pronounced dead at a Minneapolis hospital, Tucson, Arizona, police chief Chris Magnus had seen and heard enough to weigh in on a growing national scandal.

“Indefensible use of force that good officers everywhere are appalled by,” Magnus tweeted late Tuesday night. “This is contrary to how PROFESSIONAL police officers train & conduct themselves. Conduct like this anywhere makes it more difficult for police everywhere to build community trust.”

Magnus was one of the nation’s first major law enforcement officials to weigh in on the now-viral video of the arrest of Floyd, who died on Monday after being handcuffed and pinned to the ground by an officer’s knee. That Minneapolis officer, Derek Chauvin, and three others were fired Tuesday and Chauvin was arrested and charged with third-degree murder Friday.

It wasn’t a surprise that Magnus was out front of his contemporaries, given his reputation as a progressive police reformer. But the day after Magnus’s tweet, many more top cops from across the country joined him in denouncing the actions of Chauvin.

“I don’t know how you defend what you saw. I can’t defend it,” Houston police chief Art Acevedo said. “It is very evident that what occurred there was wrong. …There is a lack of humanity that is exhibited there,” said Miami chief Jorge Colina. Los Angeles police chief Michel Moore told the Washington Post, “The lack of compassion, use of excessive force, or going beyond the scope of the law, doesn’t just tarnish our badge—it tears at the very fabric of race relations in this country.”

These chiefs were joined by the heads of major law enforcement organizations like the International Association of Chiefs of Police, the Major Cities Chiefs Association and even the Fraternal Order of Police (FOP)—the nation’s largest police union, which rarely does anything but take the offending officer’s side.

RELATED CONTENT: “They Just Fired on Us”: Horrifying Videos of Cops “Using Journalists for Target Practice’ in Minneapolis

The chorus of condemnation caught the attention of Phillip Goff, a researcher and expert in racial bias and discrimination in policing. Goff has been working with law enforcement for more than a decade through his organization, the Center for Policing Equity. Usually, police—from the chiefs to their patrol officers to retired cops who move into jobs as experts on TV—ask for the public to reserve judgment until all the facts are in. But last week represented a noticeable shift in the tone from previous police responses to the killings of unarmed black men.

“They believe the health of officers is best served by establishing to the public the difference between what they saw [in the video of Floyd] and who they are,” Goff told me. “And law enforcement is a culture, nationwide, of imitation.”

And this is why, rather than the words of the chiefs, it’s been much more instructive to follow what’s been going on with their rank-and-file officers since the death of Floyd.

In Chicago, Fraternal Order of Police President John Catanzara may have told the local NPR station, “I don’t think there’s a single policeman in this country that would say that that was sound police tactics in any way, shape or form.” But by the time Catanzara’s quotes were published, police officers—the ones who make the traffic stops and enforce the public disturbance complaints—were lining up to face off against protesters in cities all around the country. They brought billy clubs, riot gear, and even tanks. They shot rubber bullets at TV reporters, turned pepper spray on large groups of protesters—especially dangerous in the midst of a pandemic—and rushed to the defense of a motorist who recklessly drove through a crowd of demonstrators.

It was hard to miss the duplicity. NYPD Commissioner Dermot Shea strongly and publicly rebuked the four Minneapolis officers involved in Floyd’s death. “What we saw in Minnesota was deeply disturbing. It was wrong,” he tweeted. “This is not acceptable ANYWHERE.” But on Friday in Brooklyn, his officers were swinging batons and scuffling with protesters in the streets, and on Saturday they were ramming their police cruisers into them.

In Seattle, police chief Carmen Best tweeted Wednesday that “no one is above the law,” referring to Chauvin. By the weekend, two of her officers were pummeling a protester on the ground.

And in Minneapolis, where the national uprising got its fiery start, police chief Medaria Arradondo earned praise for his decisive action in firing the four officers involved in Floyd’s killing. “I know that there is currently a deficit of hope in our city,” Arradondo said in a news conference Thursday. “I know that this department has contributed to that deficit of hope, but I will not allow to continue to increase that deficit.” By Saturday, journalists reported on Minnesota state troopers firing tear gas at media members at point blank range.

The initial response of police leaders may have felt like progress, but video footage of police and protesters clashing in the streets reveals the truth: Officers are much closer to what we see in viral videos documenting their brutality than in the well-intentioned words of their leaders. Despite the shift in public statements, police haven’t changed since the protests of 2014 and 2015. As my colleague Julia Craven wrote on Saturday, this week has happened before.

Little of this is a surprise to Jin Hee Lee, senior deputy director of litigation at the NAACP Legal Defense & Educational Fund who was part of the team that won class action lawsuits challenging the NYPD’s stop-and-frisk policy.

Over the past few days, Lee has been watching the dichotomy between the flowery formal statements on social media and the countless videos of cops bullying protesters in the streets.

“So many of the problems with policing is what we’re seeing [this week]” Lee told me.

While police chiefs were busy lamenting the grisly video of Floyd’s arrest, Lee and her legal team were asking a court-appointed monitor to conduct an investigation into the NYPD’s social-distancing enforcement practices. This came after data showed 81 percent of summonses for social distancing violations in New York were issued to black and Latino residents.

“Racial discrimination in departments that go unchecked can have terrible consequences,” Lee told me. “I do think it’s important to make these connections. It counters the narrative that there are a few bad apples.“

Over the weekend, another video of the police interacting with protesters made the rounds on social media. This one was from Atlanta, where police chief Erika Shields turned her attention to a woman who tearfully explained her fear that cops might someday harm her family members. Shields placed her hands on the woman’s shoulders.

By the end of the night, Atlanta police officers in riot gear were setting off smoke bombs.

Featured image: Police in gas masks stand in the street after protests in Seattle, Washington on May 30, 2020.