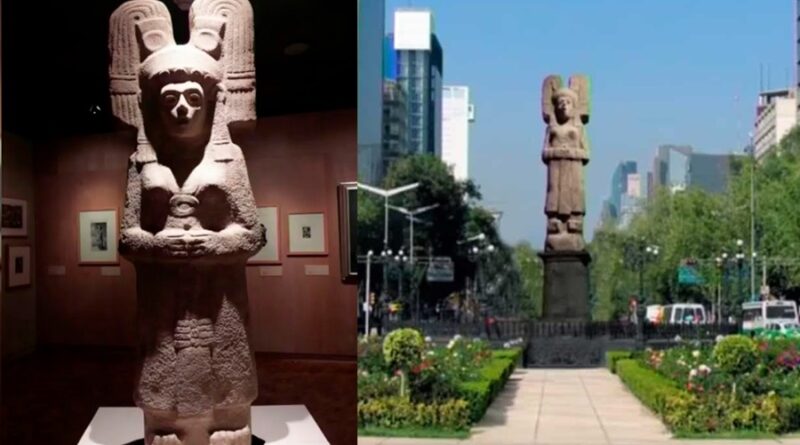 The placement of the statue of an Indigenous woman in the Reforma Boulevard is considered an act of social and historical justice.

On October 12, celebrated as the Day of the Pluricultural Nation in Mexico, Claudia Sheinbaum, mayor of Mexico City, announced that a replica of the Young Woman of Amajac will take the place on the Reforma Boulevard from where the statue of Christopher Columbus was removed. The mayor made this announcement as she presented a project for the construction of the new monument, dedicated to the indigenous peoples of Mexico and as homage to their resistance against colonization.

“We feel proud that a Mexican Indigenous woman will be represented in such a special place,” Sheinbaum said, referring to the pre-Hispanic artwork, which was found in the Hidalgo Amajac community in Veracruz in January.

Mayor Sheinbaum asserted that the placement of the replica in the Reforma Boulevard is an act of social justice towards the Indigenous peoples of Mexico, since racial discrimination has continued to be perpetuated in the Mexican everyday culture even after the colonial era.

“It is a recognition,” stated Scheinbaum in her speech, “of how our city and our country, unfortunately after the colonial period, has a history of classism and racism that comes from colonial times, and how those who have suffered the greatest discrimination are precisely the indigenous women.”

“It will represent women,” she continued, “but particularly indigenous women, their struggles, and what they represent in the history of Mexico.”

RELATED CONTENT: Mexico on the Bicentennial of Its Independence: Closer than Ever to Our America and Further Away from Empires

“The piece is linked to the Huastecan sculptural tradition and culture, although it presents certain features of the Central Mexico art style,” informed Diego Prieto, director of the National Institute of Anthropology and History (INAH) of Mexico, referring to the original statue. “Most likely it is a work from the late postclassical period [1450-1521 AD].”

The Amajac Young Woman is preserved in the Mexico City Museum of Anthropology and History. Its replica will be six meters high, and its construction will be in charge of the INAH and the Committee for Monuments and Artistic Works in Public Places of Mexico City (COMAEP).

“Given the woman’s posture and trappings, the sculpture possibly represents a powerful person from the elite, someone from the governance,” explained INAH director Prieto. “We can affirm that she is not a deity.” He further explained that the Amajac Young Woman is made of limestone rock and is 2 meters high, 60 centimeters wide, and about 25 centimeters thick.

Featured image: The statue of the Young Woman of Amajac, a Huastecan piece from the pre-Hispanic era, the replica of which will be placed in the Reforma Boulevard of Mexico City. Photo: Twitter / @INAHmx