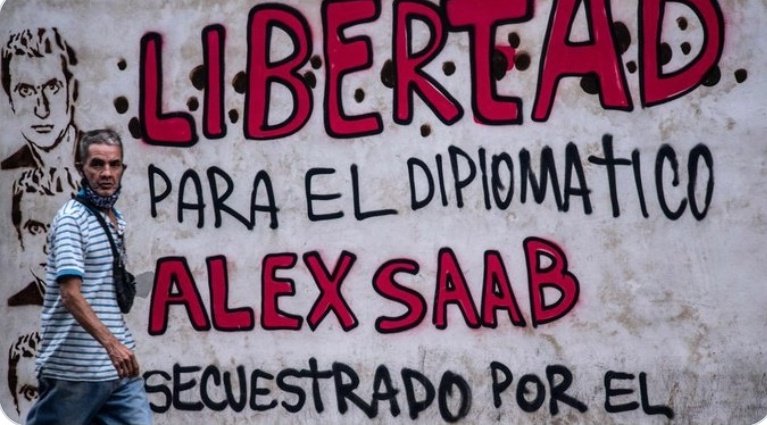 Caracas, October 16, 2021 (OrinocoTribune.com)—The Cape Verdean authorities allowed this Saturday, October 16, the illegal extraction to the United States of Venezuelan diplomat Alex Saab, who had been incarcerated in the African island country since 2020, reported a Cape Verdean local radio.

Alex Saab was taken away on board a US plane from Cape Verde’s Sal Island to Florida, an action that was not notified to the diplomat’s defense. According AP “journalist” Joshua Goodman, the Venezuelan diplomat was forced to board a small Gulfstream jet belonging to the US Department of Justice, with serial number N708JH, according to the online tracking service FlightRadar24.com. At that moment the flight was the number 1 most tracked flight worldwide in the popular service.

Has Maduro ally Alex Saab finally been extradited to the US? This Gulfstream owned by @TheJusticeDept that departed Cape Verde a few hours ago with an unlisted, northwesterly destination is attracting lots of eyeballs. It's the #1 most-tracked flight worldwide on @flightradar24. pic.twitter.com/QyKGUwZIiv

The same Joshua Goodman wrote a propaganda hit piece on Saab’s extradition that caused uproar due to the low level of journalism and the high level on propaganda in the so-called news piece, even for Goodman’s standards. AP tweeted the piece describing Saab as a “fugitive,” showing serious flaws in AP’s understanding of legal terms in an attempt to whitewash what for many legal experts is a pure and simple kidnapping.

Absolutely shameful that @AP is describing a Venezuelan diplomat being kidnapped by the US as a "fugitive." https://t.co/52AxFOFB80

“We are evaluating this violation of the legal process and we will issue an official statement as early as possible,” announced Saab’s defense team, while the International #FreeAlexSaab Committee started to work on upcoming actions to protest the terrible legal US overreach in relation to Saab’s case, according to sources close to Orinoco Tribune.

Ambassador Saab had been detained in Cape Verde in an irregular manner since June 12, 2020, when his plane made a stopover at the Amílcar Cabral International Airport in Sal Island on his way to Iran. Saab was on a Venezuelan government mission to procure food and medicines for millions of Venezuelans affected by illegal US and European sanctions. Saab’s “arrest” was carried out by Cape Verdean police despite him having diplomatic immunity certified by the Venezuelan government as well as by Russian and Iranian authorities, making the entire process illegal according to renowned international legal experts.

RELATED CONTENT: Forbes Reveals why the US Government is Trying to Extradite Venezuelan Diplomat Alex Saab

US authorities also postponed the submission of evidence against Alex Saab in the United States, which they initially had to present to the Federal Court in October 2020, and then postponed it two more times. Saab’s defense denounced the US authorities for this maneuver orchestrated to lengthen the procedure against the diplomat and achieve extradition without presenting a single proof of his alleged crimes, which is exactly what has occurred this Saturday.

Venezuela denounces the kidnapping of Alex Saab (communiqué)
The Venezuelan Ministry of Foreign Affairs released a statement denouncing the United States and Cape Verde for kidnapping the diplomat, after torturing him and arbitrarily holding him prisoner for 491 days without an arrest warrant or due process, in violation of Cape Verdean laws, international law, and the Vienna Convention.

Below is the unofficial translation of the communiqué in its entirety:

This crime was condemned by the United Nations Organization and by various countries of the world.

The information has been confirmed by the relatives of the diplomat who were recently prevented from entering that country [Cape Verde].

As is public knowledge, Alex Saab is a permanent representative of our government in the Dialogue Table that is being held in Mexico with the Venezuelan opposition, thanks to the facilitation of the Kingdom of Norway and the accompaniment of the Russian Federation and the Kingdom of the The Netherlands, the smooth running of which has also been undermined by this crime.

The government of the Bolivarian Republic of Venezuela repudiates this serious violation of human rights against a Venezuelan citizen, a diplomat and representative of our country to the world.

This is a fact that sets a dangerous precedent for international law. We hold the Cape Verdean authorities and the government of President Biden responsible for the life and physical integrity of Alex Saab and we reserve as a sovereign nation the actions that we will take accordingly.

We appreciate the solidarity of the noble people of Cape Verde and Africa, as well as the social movements of the United States and the world, who have raised their voices in repudiation of this crime.

The fight for the dignity of this innocent man, who is assisted and protected by International Law, continues and intensifies.

“The extradition of Alex Saab is a triumph in the fight against drug trafficking, money laundering and corruption that the dictatorship of Nicolás Maduro has propitiated,” wrote the South American cheerleader of the US on his Twitter account. “Colombia has supported and will continue to support the US in the investigation against a transnational crime ring led by Saab.”

Rodríguez posted a response on her Twitter account: “Unlike those who promote the production and trafficking of drugs as sustenance for the Colombian state and its economy, Alex Saab is an innocent Venezuelan diplomat, a victim of kidnapping and violation of his human rights, who has served our country against the immoral imperial blockade.”

Mexico Talks suspended
The Venezuelan government delegation at the dialogue that is being held in Mexico will not attend the next round of talks, scheduled to start this Sunday, October 17, in protest against the kidnapping of Saab. This was announced by the delegation head Jorge Rodríguez on Saturday, after the news of the incident broke.

Negotiations with the opposition have been suspended following the kidnapping and extradition of Venezuelan diplomat Alex Saab by the United States. @jorgerpsuv pic.twitter.com/Lb41np2IWU

The president of Venezuelan National Assembly and head of the Venezuelan government delegation to the Mexico Talks, Jorge Rodríguez, in company of the other members of the delegation, read a statement condemning the illegal extradition operation carried out by the United States government against Saab, which “alerts the world that Alex Saab’s life is in danger at the hands of a judicial system instrumentalized to attack Venezuela and demands his immediate release from the government of Joe Biden.”

“This illegal and inhumane action, harmful to international law, constitutes a new act of aggression by the United States against the Bolivarian Republic of Venezuela, given that Alex Saab has been incorporated by our country as a full member of the dialogue and negotiation process that is taking place in Mexico,” declared Rodríguez.