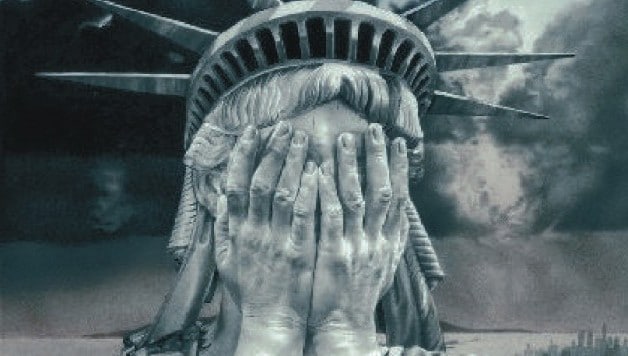 More than 41,500 people died in the United States in 2020, not precisely because of COVID-19, they died as a result of gunshots. At the height of the pandemic, 592 mass shootings were recorded in the North American country, something like 1.6 armed confrontations every day. In 2019, there were 415.

Firearms sales broke records in 2020, 23 million in less than a year, 64% more than sales recorded in 2019 when there were more guns in the hands of US civilians than inhabitants: the ratio was 120.5 guns per 100 inhabitants. More than eight million who bought guns in 2020 did so for the first time (National Shooting Sports Foundation).

To the shame of humanity, it wasn’t just George Floyd who was choked to death while a police officer pressed his neck with his knee. According to data from Mapping Police Violence, 316 people of African descent were shot and killed by police in the United States, accounting for 28% of the 1,127 people killed by law enforcement with firearms in 2020.

In the wake of such atrocity, hundreds of protests against racism took place in the North American country, leaving more than 10,000 protesters arrested, among them 117 journalists. According to The Guardian, police officers beat and pepper-sprayed reporters. In contrast, only two percent of the police involved in shootings were charged with a crime.

This flagrant violation of the human rights to life, freedom of demonstration and speech, due process, and non-discrimination on the basis of race or ethnicity was ignored by the UN Human Rights Council, but also occurred in the midst of one of the worst pandemics afflicting humanity.

While every hour five US citizens died as victims of firearms, 64 died of COVID-19 due to the incompetence of a government which, despite calling itself a world power, possessing considerable resources, and not being financially blocked, ignored the risks of the virus from the outset, giving priority to economic activity over the lives of the population. The United States heads the world list of contagions and deaths due to the coronavirus, so that the rights to health and life are seriously violated in the North American country.

RELATED CONTENT: Our Crises from this Last Year Foreshadow the Inevitable Unraveling of Capitalist Civilization

William Foege, former director of the US Center for Communicable Diseases, described as a massacre what the US government has unleashed due to its incompetence containing the virus. For its part, The Washington Post described the government’s actions, with respect to the pandemic, as “state-sanctioned murder” in which “the elderly, factory workers and African Americans and Hispanic Americans” are deliberately slaughtered.

Even the right to education has not been guaranteed. Internet access is fundamental to pandemic educational pursuit. Yet, in the US that supposedly has made the greatest technological advances in the world (after China), 17 million children live in homes without internet connection, and more than seven million do not have a computer (according to the 2018 census).

Inequality, and therefore poverty and hunger in the United States increased in 2020. More than 50 million people, i.e. 17% of the population, suffered from food insecurity in 2020, i.e. they had nothing to eat, and one out of four of them were children (Feeding America). Recall that in 2019, according to the Census Bureau, 40 million Americans lived in poverty and more than half a million lacked permanent shelter, figures that increased during the pandemic (Reports on the violation of human rights in the United States prepared by the Information Office of the State Council of China).

Some 20.5 million US citizens lost their jobs during the pandemic and the unemployment rate reached 21.2%. Paradoxically, in less than 12 months, the country’s 614 billionaires increased their wealth by $931 billion USD (Forbes) thanks to government policies aimed at protecting the stock market. The 50 richest US citizensns have as much wealth as the 165 million poorest people in the country (Bloomberg).

Not to mention the violation of the migrant population’s human rights by the US government. In 2020, 21 people died in immigration custody. Of the 266,000 migrant children detained and separated from their parents or family members, more than 25,000 have been detained for more than 100 days, a thousand for more than one year, and some have spent more than five years in custody. Several asylum seekers were threatened and forced to sign their own deportation orders. Those who refused were waterboarded, beaten, pepper sprayed and handcuffed for fingerprinting (State Council Information Office of China).

Not content with violating the human rights of its own population, the government of the United States, through coercive measures and also through other economic, psychological and political actions within the framework of unconventional wars, also violated those of all peoples who do not align themselves with its interests, to the point of committing crimes against humanity. They try to justify their actions with the alleged violation of human rights in our countries, in addition to the discourse of the failed state, the presence of alleged dictatorial regimes, and more recently with the narrative of terrorism and drug trafficking. Discourse that, of course, they spread without the slightest proof.

Despite the multiple calls made by the United Nations requesting the lifting of the so-called “sanctions” during the pandemic, the US government intensified the financial and economic blockade against Cuba, Iran, or Venezuela, to mention a few countries.

We do not know what surprises us more, whether it is the shameful, public and notorious double standards of the US governments in matters of human rights, or the brazenness in not abiding by the decisions that have been democratically taken within the UN against the coercive measures. How many years have we been voting against the genocidal blockade of the Cuban people? At least since 1992. Have we asked ourselves why the US does not obey the decisions taken by the evident and overwhelming majority of the UN member countries?

Those votes, although very important insofar as they show the will of the majority of the countries that are committed to justice, peace and self-determination of the peoples, have become a kind of moral judgment that, apparently, the country of the North does not care about.

We are not doing something right, it is necessary to review the strategy that the countries have used against unilateral coercive measures. These votes have not been enough. In our opinion, what the countries should debate and vote in the UN Assembly is not only to state whether they are in favor or against unilateral coercive measures, but to advance in the creation of a new world economic and political architecture to prevent the US from “sanctioning,” threatening, blockading and subjugating entire peoples to impose its rules, its economic system, and to seize their wealth. In this regard, we will make proposals in the next issue.