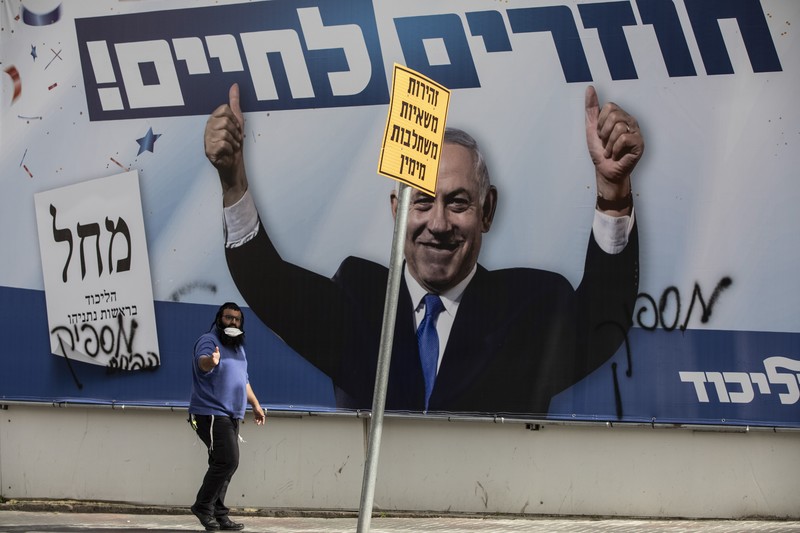 The final result from Israel’s general election may not be known for another day or two until all the votes have been tallied. But with 90 percent counted already, a clear picture has emerged.

Here are The Electronic Intifada’s five main takeaways from the election:

Netanyahu the only likely PM
Benjamin Netanyahu may be deeply immersed in a trial on multiple corruption charges.

He may have dragged Israelis to four elections in two years. And he may have held his political rivals – and the country – to ransom by refusing to pass a budget.

But despite all that, this election result shows beyond doubt that no party leader is even close to Netanyahu in winning the confidence of Israelis.

With most votes counted, his Likud party has 30 seats – nearly twice the number of its nearest rival, Yesh Atid, with 17 mandates. The rest of the pack – a further 11 parties – are jostling far behind, most of them at between six and eight seats each.

This election marks a historic victory for what in Israel is termed “the right” but that comprises religious fundamentalist and far-right parties. Even in the most cautious assessment, this bloc won 72 seats in the 120-seat parliament.

A further 25 seats belong to what Israelis consider the “center-right.”

But Netanyahu may still struggle to cobble together a government, given personal rivalries on the far-right. He appears to have failed once again to muster enough seats among parties loyal to him to pass the 60-seat threshold.

Nonetheless, Likud’s massive lead will make it nigh impossible for any other leader, including Yair Lapid of the “center-right” Yesh Atid, to make a plausible case for forming an alternative government.

Netanyahu will have to engage once again in complex bargaining to forge a tenuous governing coalition. He must entice Naftali Bennett, the leader of Yamina, a far-right settler party, into his fold despite long-simmering tensions between the pair.

But Netanyahu may still need a seat or two more, and that will probably require breaking apart another right-wing party. Or he may have another trick up his sleeve (see the entry on the Palestinian minority below).

If not, Israel is heading towards a fifth election later this summer, with Netanyahu again remaining in charge as caretaker prime minister.

The Kahanists triumph
The big upset – at least for those Israelis invested in the idea that they live in a democracy – is that Israel’s version of the Ku Klux Klan did far better than expected. Jewish Power’s leader, Itamar Ben-Gvir, is now in the Israeli parliament and Netanyahu himself can take the credit.

Desperate to win a clear majority for his far-right bloc, Netanyahu brokered an alliance between Ben-Gvir’s party and two other, trenchantly Jewish supremacist, anti-Arab parties, to create a new list called Religious Zionism.

Ben-Gvir, a disciple of the late Rabbi Meir Kahane, whose Kach party was outlawed back in the 1990s and is treated as a terrorist organization by most western states, is now in a strong bargaining position. Even if he can get Bennett onboard, Netanyahu will need Ben-Gvir in the governing coalition.

Horror of horrors, the leader of Israel’s version of the Ku Klux Klan may even end up a government minister. That will be a very bad look.

But Ben-Gvir probably won’t find himself too far adrift ideologically from many other members of a Netanyahu cabinet.

Palestinian minority in trouble
The parties representing Israel’s large minority of Palestinian citizens – a fifth of the population – had emerged in the previous three elections as the main stumbling bloc to Netanyahu forming a government. Sweeping them out of the way has been a key ambition of the Likud leader.

The four Palestinian parties, together for the past six years in an electoral alliance known as the Joint List, became one of the largest blocs in the parliament. In the last election, a year ago, they won a record 15 seats.

But this time they knew they were in trouble.

Netanyahu managed to engineer a split by persuading one, the United Arab List, a conservative Islamic party, that it could do better out of the Joint List than in.

Netanyahu rebranded himself as “Abu Yair” during the campaign and promised that he was ready to shower the minority with post-election goodies if one of its parties was ready to do business.

In Netanyahu’s script, this Abbas is expected to play a similar accommodationist role to his namesake in the occupied West Bank, Mahmoud Abbas, head of the Palestinian Authority. That leaves the rest of the Joint List in the bogeyman role of Hamas.

The gamble appears to have paid off. The Joint List has collapsed to six seats, just one above Abbas’ United Arab List, after a significant drop in turnout among Palestinian citizens.

A partially vindicated Mansour Abbas may now claim he has a mandate to negotiate with Netanyahu to help him create a government. That may not prove straightforward for Netanyahu given that his coalition will necessarily include the vehemently racist Religious Zionism.

But any supporting role for Abbas in a Netanyahu government would deeply and dangerously split the Palestinian minority: between those ready to do whatever it takes to gain a little influence in a self-declared Jewish state and those certain that they are being gamed in bad faith to endorse a government of occupiers.

Navel-gazing from the Zionist left
What Israelis call “the Zionist left” had been on the brink of political extinction in recent elections. This time it managed a minor turnaround.

Between them, Labor and Meretz secured 12 seats – up from six just a year ago.

But while some observers will trumpet this as a sign of the beginnings of a peace camp revival in Israel, that is a misreading.

Labor and Meretz did not win votes by championing a peace process or negotiations with the Palestinians. In fact, as is now entirely normal during election campaigns, they did not talk at all about the Palestinians or the occupation.

The Zionist left’s minor success reflected two factors. The first was that no credible anti-Netanyahu “centrist” leader emerged to replace ex-general Benny Gantz, who betrayed his supporters in the last election by joining Netanyahu’s government. (Gantz scraped in with a greatly diminished eight seats this time.)

With no center gravity for the anti-Netanyahu bloc, Labor and Meretz downplayed traditional political issues and emphasized identity politics instead. That appears to have paid off.

Merav Michaeli, Labor’s new leader, attracted many on the cultural left with her outspoken views – by Israel’s standards – on feminism. And Nitzan Horowitz, Meretz’s leader, who is openly gay, accentuated the LGBT agenda in ways that appealed to younger, more cosmopolitan voters.

Both benefited from the growing and explicit intolerance on the religious right – firmly embraced by Netanyahu and his Likud party. For the first time, Israel’s parliament will include a representative from the aggressively homophobic Noam party, part of the new Religious Zionism faction Netanyahu helped put together.

For the cultural left, there were also celebrations that the next Knesset will include the first Reform rabbi, who stood as a Labor candidate. The parliament has always been full of rabbis – Israel is part theocracy – but previously they had only ever been drawn from the fundamentalist Orthodox and ultra-Orthodox streams.

Palestinians out of the picture – again
Yet again the Palestinians under occupation will bear the brunt of the election result. And yet again they had no say in its outcome.

In fact, the nearest the Palestinians got to a voice on election day itself was a single rocket fired harmlessly out of the Gaza Strip as Netanyahu campaigned in nearby Beersheva.

With the triumph of the far-right in Israel, the backing of “peace partners” in the Gulf, and no likely obstruction from the White House whoever its occupant, the Palestinians have become a non-issue.

The political consensus on the dominant Israeli right is that there will be no Palestinian state and that the occupation is permanent. Formal annexation of the West Bank is on the horizon too.

The differences on the right are only over when it happens, how much territory is seized and how the move will be sold abroad.

For the first time, the voice of Palestinians under occupation was also marginalized among the Palestinian minority in Israel. With Mansour Abbas’ split from the Joint List, internal divisions predominated.

If Abbas does indeed decide to support Netanyahu – whether from inside or outside the government – it will be a bitter additional blow.

Featured image: Benjamin Netanyahu has once again shown he is the only political leader Israelis want as PM. Heidi Levine Sipa Press

Jonathan Cook, a British journalist based in Nazareth since 2001, is the author of three books on the Israeli-Palestinian conflict. He is a winner of the Martha Gellhorn Special Prize for Journalism. His website and blog can be found at: www.jonathan-cook.net.