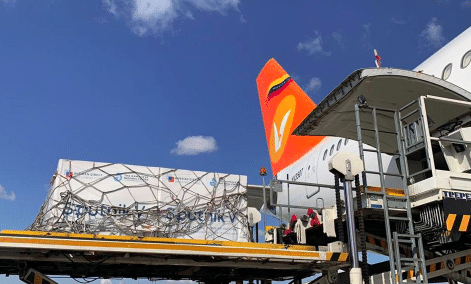 This Monday, March 29, the third shipment of Russian Sputnik V vaccine arrived in Venezuela on a Conviasa airline flight from Moscow, containing 50,000 vaccines. With this shipment, 250,000 doses have arrived in the country since February 15.

In addition, it is estimated that the flight itinerary will continue to advance Venezuela’s COVID-19 vaccination plan. This batch was received by the Russian Ambassador to Venezuela, Sergey Mélik-Bagdasárov; Venezuelan Minister for Health, Carlos Alvarado; and Foreign Affairs Minister Jorge Arreaza.

New agreements were signed with the Russian Federation to complete an order for ten million doses of its vaccines.

“50,000 Sputnik V vaccines arrived, and 98,000 immunized health workers are going to immunize more health workers and people over 60 years of age or with a comorbidity, for comprehensive protection,” said Alvarado.

Similarly, Alvarado explained that “with these 50,000 vaccines we advanced towards the goal of vaccinating 70% of the population and then anticipating herd immunization.”

Priority for the elderly
In addition, the head of the Health Ministry announced that older adults will be prioritized.

“The goal is high, and we are starting with the most susceptible population. We started with life-saving health personnel and teaching personnel; vaccination of adults over 60 years of age will soon begin.”

The goal is to vaccinate 22 million people. “We are already making agreements for more vaccines with Russia, China, Cuba and India. Venezuela is not stopping, and we are going to advance towards mass vaccination,” Alvarado announced.

Peace diplomacy
Foreign Affairs Minister Arreaza, for his part, highlighted the twinned alliances between both nations that allowed the acquisition of this drug.

“Thanks to the Russian Federation, today we received more vaccines,” said Arreaza. “In the next few hours further good news will be announced.”

He announced that in April a direct commercial flight route from Moscow to Caracas will be opened to expand binational agreements, trade, and tourism.

“We have the sale of oil under siege and they have blocked more than $100 billion from us, but President Nicolás Maduro does not stop,” added Arreaza.

The head of diplomacy also outlined the titanic efforts of the Government to guarantee the health of the Venezuelan people.

“The vice president met with the director of the WHO for the COVAX initiative for truthful agreements, not falsehoods,” he said, perhaps referring to the social media campaign launched by anti-Chavismo claiming that the Venezuelan government is not allowing some vaccines to enter the country. In reality the Venezuelan government has been blocked by the United States, the European Union and extreme-right Venezuelan anti-Chavismo from buying vaccines, due to the seizure of its assets in international banks.

Arreaza recalled that “we must be very rigorous, and that is why we are approving safe vaccines for people,” a reference to the responsible announcements made by the Venezuelan government in relation to its concern about acquiring AstraZeneca vaccines, singled out by many countries for causing serious side effects.

“We are going step by step, but these are firm steps. The people must recognize that their Government is making every effort and soon we will all be vaccinated,” said Arreaza.

Finally, a humanistic approach to the vaccination process in Venezuela was ensured, and the arrival of more drugs is expected.