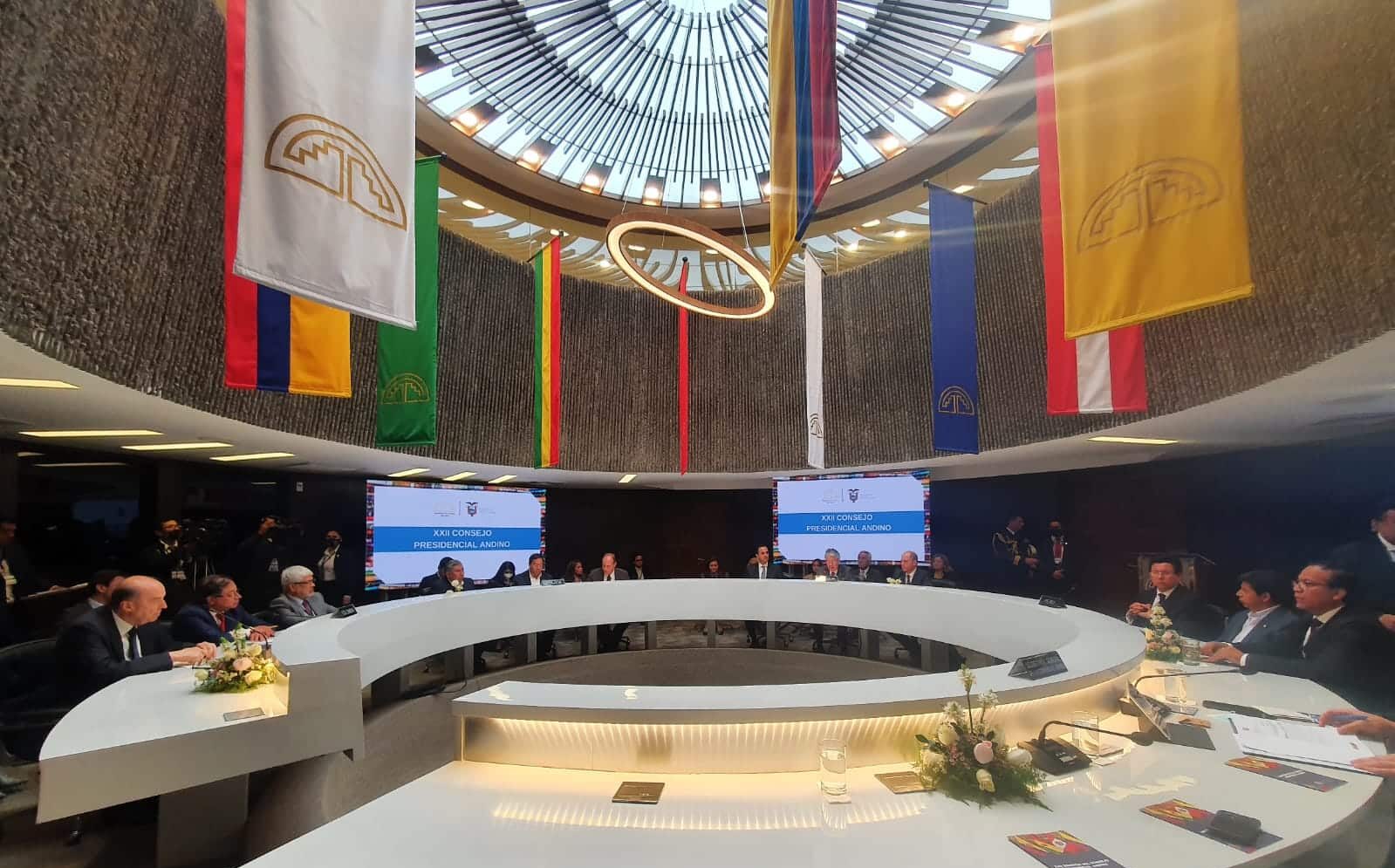 Caracas, August 31, 2022 (OrinocoTribune.com)—This Monday, August 29, the 22nd Meeting of the Andean Presidential Council was held in Lima with the participation of President Pedro Castillo (Peru), Luis Arce (Bolivia), Gustavo Petro (Colombia) and Guillermo Lasso (Ecuador). During the summit, President Petro asked the members of the Andean Community (CAN) to bring back Chile and Venezuela into the organization and invite Argentina to join.

Colombian President Gustavo Petro said during the meeting, in his speech given in the context of his first international tour as president, that “if we manage to integrate Chile, Venezuela and Argentina… I think this would significantly change things and our voice would be heard much more clearly on the world stage.”

“We must be more powerful and gather more voices. The requests to Chile and Venezuela must be taken into account. Go back to the first stage of the Andean community when they were part of this apparatus,” Petro added.

The Colombian head of state insisted on the need for the enlargement of the Andean Community to be carried out with a “minimum agreement” respecting the Human Rights Convention and for the CAN to have “a stronger voice” in the international community. Many experts in progressive circles see this as a US Trojan Horse that is usually used against governments that are not submissive to US or European interests and omitted when right-wing governments commit human rights abuses.

RELATED CONTENT: Venezuela Is Producing Magnesite for Its Own Consumption (Import Substitution)

The Andean Community, initially called the “Cartagena Agreement,” was founded in 1969 following the replication of regional free trade and economic community bodies inspired by the European community, currently European Union, and mainly pushed around the world by US and Europe interests to exploit scale economies in certain regions to maximize the revenue of big corporations, belonging mostly to Global North countries

Venezuela and Chile were once CAN members, while Argentina never joined because it was embarked in the MERCOSUR project that has a similar origin. Venezuela left the CAN in the early 2000s during the first government of President Hugo Chavez, while Chile as a founding member left in 1976 during the military dictatorship of Augusto Pinochet.

In 2006, President Hugo Chávez announced Venezuela’s exit from CAN, due to his strong opposition to the free trade agreements that Peru and Colombia signed with the United States which broke the most basic rules of economic integration schemes. This was a premeditated move by Washington in response to the victory of Hugo Chávez, with the help of Néstor Kirchner (Argentina) and Luis Inácio Lula da Silva (Brazil) which defeated the US trade initiative called the Free Trade Agreement for the Americas (FTAA) at the summit of Mar de Plata (Argentina) in 2005.

“The Andean Community was a big lie. It was already dead before, but now they have finished it off with the signing of these agreements with the North American empire,” Chavez stressed on that occasion since Peru and Colombia broke the trade preferences agreed upon among CAN member countries.

Signing the trade agreement with Peru and Colombia allowed Washington to penetrate trade preferences agreed upon by CAN member countries, thus creating a complex internal crisis within the trade organization and pushing it to its decline. 16 years have passed and those trade agreements with the US are still valid.

President Petro, since taking office has called for a renegotiation of the trade agreement with the US, and its success might have repercussions on the future of the Andean Community. But Peru will also be forced to do something similar if they are really committed to rescuing CAN, but Castillo’s political will and base is too eroded to advance such a challenge, according to some experts.

The Peruvian president will hold the presidency of the bloc for a year after receiving it from Bolivia’s Luis Arce. According to Castillo’s foreign minister, Miguel Rodríguez MacKay, the priority is to work for the reunification of the group, “so that Chile returns to the CAN and at the same time, of course, the return of Venezuela.”

According to Orinoco Tribune’s editor, Jesús Rodriguez-Espinoza, “CAN and MERCOSUR are regional trade schemes very well penetrated by US and European interests and are mostly designed to make business more profitable for their corporations and a few oligarchical economic groups in member countries. They achieve that by reducing trade duties and financial/investment regulations allowing a corporation (foreign or national) to set a base in one of the member countries to serve a bigger market without worrying about bureaucratic and protectionist measures in each individual country.”

Rodriguez-Espinoza added that despite the negative “fabrication flaws,” these commercial schemes can sometimes bring commercial benefits, if they are responsibly handled within the criteria for sovereignty, he added: “After abandoning CAN, Venezuela prioritized joining MERCOSUR, formed then by Argentina, Brazil, Uruguay and Paraguay. In 2012, after pushing very hard Venezuela was finally admitted, taking advantage of a temporal exclusion of Paraguay due to the coup d’etat against Fernando Lugo (Paraguay was the only country opposing Venezuela’s formal admission).”

Currently MERCOSUR is also facing a complex internal situation with Paraguay and Uruguay pushing for a trade agreements with China while Brazil has objections.

Many economists and experts in Venezuela (most of them linked to oligarchic groups) have been promoting in recent weeks the idea of Venezuela rejoining CAN, but first Venezuela will have to check its chances of rejoining MERCOSUR and also evaluate the real possibility of corrections in Peru and Colombia with regards to their commercial preferences with the United States.

A few years ago many experts’ suggestion was to converge CAN and MERCOSUR into an only South American commercial block to strengthen the economic capacities of the region and put it in a position of strength to face negotiations with bigger actors in Asia, Europe and North America.