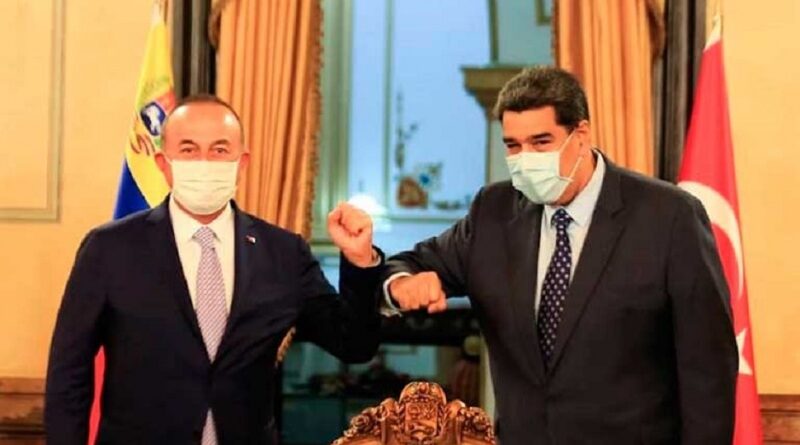 This Tuesday at the Miraflores Palace, the Venezuelan president, Nicolás Maduro, received the Minister of Foreign Affairs of Turkey, Mevlüt Çavuşoğlu.

The meeting held in the Simón Bolivar room of the presidential palace, took place in the context of the 70 years of the establishment of diplomatic relations between both nations.

The visit of the Turkish Foreign Minister ratifies the unrestricted support of the government of the president of Turkey, Recep Tayyip Erdogan, to Venezuela.

Also participating in the meeting were the Venezuelan Foreign Minister, Jorge Arreaza; the vice president, Delcy Rodríguez; together with the diplomatic authorities of the Eurasian nation, to review the different areas of cooperation and interest for both countries.

During the meeting, the Turkish diplomat communicated Erdogan’s greeting and invitation to the Venezuelan authorities that he awaits them in Turkey when the pandemic passes.

This Tuesday, Venezuela and Turkey have signed a series of agreements on economic, social and educational matters, in order to strengthen the bilateral relationship between both countries. Through these agreements, Turkey will build a hospital in Venezuela with a capacity for 288 beds.

In an appointment that both foreign ministers previously held, Arreaza expressed thanks for the support of the Turkish nation with the recent shipment of 15 tons of supplies and medical equipment to face the coronavirus pandemic.

The Turkish Foreign Minister has said that both the public and private sectors of his country are “eager” to invest in Venezuela and do business there.

He also highlighted that, despite the pandemic, in the last 6 months Caracas and Ankara have tripled exchanges compared to the same period in 2019, a reason why [Turkey] considers that this rhythm must be maintained.