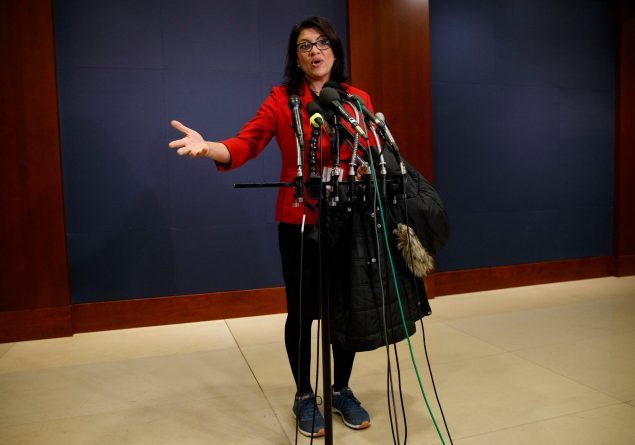 On Monday, in an interview with The Intercept, Rashida Tlaib, a Michigan Democrat who in November became the first Palestinian-American elected to Congress, went public with her support for the Boycott, Divestment and Sanctions movement, which seeks to use economic pressure on Israel to secure Palestinian rights. That made her the second incoming member of Congress to publicly back B.D.S., after Minnesota Democrat Ilhan Omar, who revealed her support last month.

No current member of Congress supports B.D.S., a movement that is deeply taboo in American politics for several reasons. Opponents argue that singling out Israel for economic punishment is unfair and discriminatory, since the country is far from the world’s worst violator of human rights. Further, the movement calls for the right of Palestinian refugees and millions of their descendants to return to Israel, which could end Israel as a majority-Jewish state. (Many B.D.S. supporters champion a single, binational state for both peoples.) Naturally, conservatives in the United States — though not only conservatives — have denounced Tlaib and Omar’s stance as anti-Semitic.

It is not. The conflation of anti-Zionism with anti-Semitism is a bit of rhetorical sleight-of-hand that depends on treating Israel as the embodiment of the Jewish people everywhere. Certainly, some criticism of Israel is anti-Semitic, but it’s entirely possible to oppose Jewish ethno-nationalism without being a bigot. Indeed, it’s increasingly absurd to treat the Israeli state as a stand-in for Jews writ large, given the way the current Israeli government has aligned itself with far-right European movements that have anti-Semitic roots.

[Listen to “The Argument” podcast every Thursday morning, with Ross Douthat, Michelle Goldberg and David Leonhardt.]

The interests of the State of Israel and of Jews in the diaspora may at times coincide, but they’ve never been identical. Right-wing anti-Semites have sometimes supported Zionism because they don’t want Jews in their own countries — a notable example is the Polish government in the 1930s.

Conversely, there’s a long history of Jewish anti-Zionism or non-Zionism, both secular and religious. In 1950 Jacob Blaustein, the president of the American Jewish Committee, one of the country’s most important Jewish organizations, reached an agreement with Israel’s prime minister, David Ben-Gurion, in which Ben-Gurion essentially promised not to claim to speak for American Jews. “Jews of the United States, as a community and as individuals, have no political attachment to Israel,” said Blaustein at the time.

Decades later, such a statement from the committee — or any major, mainstream Jewish organization — would be unthinkable. A consensus set in “that Jewish identity can be reduced to Israelism,” Eliyahu Stern, an associate professor of modern Jewish history at Yale, told me. “That’s something that takes place over the second half of the 20th century in America.”

The centrality of Israel to American Jewish identity has at times put liberal American Jews in an awkward position, defending multiethnic pluralism here, where they’re in the minority, while treating it as unspeakable in Israel, where Jews are the majority. (American white nationalists, some of whom liken their project to Zionism, love to poke at this contradiction.)

Until fairly recently, it was easy enough for many liberals to dismiss consistency on Israel as a hobgoblin of little minds. A binational state might sound nice in theory, but in practice is probably a recipe for civil war. (Even the Belgians have trouble managing it.) The two-state solution appeared to offer a route to both satisfying Palestinian national aspirations and preserving Israel’s Jewish, democratic character.

Now, however, Israel has foreclosed the possibility of two states, relentlessly expanding into the West Bank and signaling to the world that the Palestinians will never have a capital in East Jerusalem. As long as the de facto policy of the Israeli government is that there should be only one state in historic Palestine, it’s unreasonable to regard Palestinian demands for equal rights in that state as anti-Semitic. If the Israeli government is going to treat a Palestinian state as a ridiculous pipe dream, the rest of us can’t act as if such a state is the only legitimate goal of Palestinian activism.

At times, I’ve agreed with those who see something disproportionate in the left’s fixation on Israel. But the oft-heard argument that other peoples are suffering more than the Palestinians can be a form of weaponized whataboutism, meant to elide the unique role America plays as Israel’s protector.

In an op-ed essay in The Wall Street Journal last week, Secretary of State Mike Pompeo listed Saudi Arabia’s growing ties to Israel as a reason not to downgrade America’s relationship with the kingdom, despite the killing of the journalist Jamal Khashoggi. If the Trump administration is going to use our alliance with Israel as an excuse for abandoning fundamental values, surely Americans are justified in subjecting that alliance to special scrutiny.

Meanwhile, Israel is ever more willing to ally itself with foreign leaders who share its illiberal nationalism, even when they’re hostile to Jews. “In the past, Israel has always adhered to a clear policy that it will not engage with political parties ostracized by the local Jewish community,” Anshel Pfeffer wrote in the Israeli newspaper Haaretz last year. Prime Minister Benjamin Netanyahu of Israel, wrote Pfeffer, “has abandoned this policy.”

Netanyahu has nurtured a particularly close relationship with the Hungarian right-wing populist Viktor Orban, whose government is waging a demonization campaign against the Hungarian-born Jewish billionaire George Soros. Just this week Soros’s Central European University announced it has been forced out of Hungary. And Netanyahu’s office is trying to negotiate a compromise with Hungary over the contents of a museum that many fear will whitewash Hungary’s role in the Nazi genocide of the Jews, essentially putting Israel’s imprimatur on a modified form of Holocaust revisionism.

Netanyahu, then, seems to understand that being pro-Israel and pro-Jewish are not the same thing. Liberal American Jews, particularly younger ones, are learning that lesson as well. Some staunch Zionists are bad for the Jews — witness Steve King, the Republican congressman from Iowa who invokes his support for Israel when he’s called out for his blatant white nationalism.

At the same time, people with an uncompromising commitment to pluralistic democracy will necessarily be critics of contemporary Israel. That commitment, however, makes them the natural allies of Jews everywhere else.

Michelle Goldberg has been an Opinion columnist since 2017. She is the author of several books about politics, religion and women’s rights, and was part of a team that won a Pulitzer Prize for public service in 2018 for reporting on workplace sexual harassment issues. @michelleinbklyn