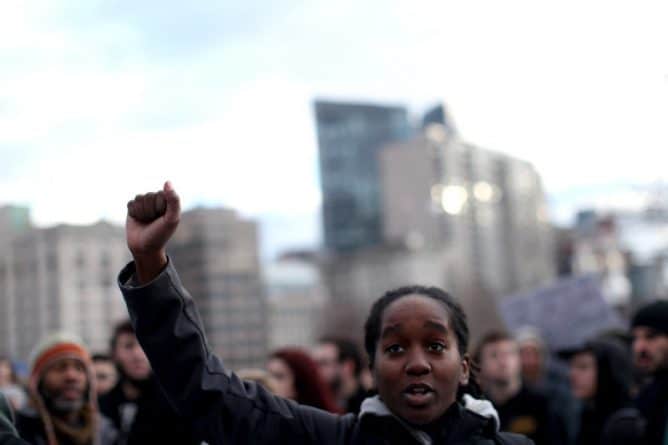 Academics and scholars, from Lucy Peterson, University of Michigan, and Steven Salaita to Thomas Abowd, Tufts University, and Rabab Abdulhadi, San Francisco State University, have faced numerous attacks from Zionists in the US.

But the recent firing of CNN analyst Marc Lamont Hill is clear recognition that #BlackPalestinianSolidarity is the strongest threat to Israel’s attempts to maintain its hegemony over Palestine liberation discourse in this country.

All those who watched Hill’s speech at the United Nations – which was delivered on 28 November, the eve of the UN-recognized International Day of Solidarity with the Palestinian People – understood clearly what the Temple University professor meant with his conclusion.

“We have an opportunity to not just offer solidarity in words but to commit to political action, grassroots action, local action and international action that will give us what justice requires,” he said. “And that is a free Palestine from the river to the sea.”

We understood because he prefaced that section with a description of real Black-Palestinian solidarity “that is bound up not just in ideology but in action.”

This is the type of solidarity reflected in Palestinian support for the Ferguson, Missouri, protests of the killing of Michael Brown in 2014; and in Palestinian support for grassroots actions led by the Chicago Alliance Against Racist and Political Repression this year to ensure that Chicago police officer Jason Van Dyke stood trial for the killing of Black teenager Laquan McDonald (Van Dyke was ultimately convicted of second degree murder – the first white on-duty police officer in Chicago ever convicted for killing a Black person, as far as anyone can tell).

It is reflected in historical Black support across the US for the national rights of Palestinians, including its unequivocal defense of Rasmea Odeh in her three-and-a-half year legal battle (which she ultimately lost, forcing her deportation to Jordan in 2017) against the federal government’s politically charged prosecution of her alleged immigration violations.

Hill believes, like many millions across the world, that justice requires “a free Palestine from the river to the sea.” This clause in his speech is what drew the ire of the Anti-Defamation League and other extreme anti-Palestinian voices in the US, some who disingenuously even accused him of calling for the genocide of Israeli Jews.

It signifies the political sentiment that a white settler-colony state built on the Zionist premise that those who identify as Jews anywhere in the world have more of a right to the land of historic Palestine than the Palestinians who have lived there for generations is a racist concept that has led to inequality, apartheid, the illegal Israeli military occupation of Palestinian lands, and vicious crimes against the Palestinian people.

It also represents the political reality that a two-state solution has never been viable.

Israeli-only settlements have been built on expropriated Palestinian land in Jerusalem and elsewhere in the West Bank since 1967 in violation of international law. Palestinians make up 20 percent of the population of Israel, and the Gaza Strip and the West Bank are not contiguous territories. Freedom from the river to the sea simply means that the only real solution to the Palestine question is a single democratic state in historic Palestine, where all the people who live there enjoy equal rights.

So Hill’s political “crime” is that he upholds equal rights for Palestinians, but he is also even more “guilty” of being a representative of the Black liberation movement in this country, a large and constantly growing section of which believes, as he does, that Palestinian rights are directly bound to the rights of Black people in the US.

Two weeks ago, I had the honor of being one of the keynote speakers at the National Students for Justice in Palestine conference at the University of California, Los Angeles.

Students for Justice in Palestine chapters and other Palestinian and Palestine support organizations have built strong and sustaining relationships with Black students on campuses across the US. So I was asked – as a representative of the US Palestinian Community Network – an organization I helped co-found and still volunteer for – to address the issue of building coalitions and alliances with other oppressed communities, especially those in the Black liberation movement.

The US Palestinian Community Network recognizes that the oppressors of Palestinians are not only the Israelis, but also reactionary Arab regimes and especially US imperialism. As a consequence, our people in different parts of the world have different responsibilities.

The resistance in Palestine is organized one way, and the resistance in the Palestinian diaspora, another. Here in the US, the belly of the beast, we organize the grassroots to weaken the empire. The struggle today that most weakens the empire is the struggle for Black liberation.

The main demand in the Black community is for law enforcement to stop killing Black people. So we join organizations like the Chicago Alliance Against Racist and Political Repression and others fighting for community control of the police, a demand which was first articulated by the Black Panthers way back in 1970.

It is why COINTELPRO (a series of FBI-led counterintelligence operations in the 1950s, ‘60s, and ‘70s targeting domestic US political movements), McCarthyism, Hoover’s FBI and law enforcement in general infiltrated, harassed, assassinated and devastated Black people and their organizations in this country for so many years, and why, like Marc Lamont Hill, they are still targets of repression today.

The flip side is that anti-imperialist victories in other countries, like Palestine, will support Black liberation here. Both liberation movements always saw themselves as partners in the struggle against racism and US imperialism. Palestinians and Black people have worked together in community-based struggles since the early ’70s, and partnered in the Rainbow Coalition, supporting Jesse Jackson’s run for the White House. We also supported Chicago’s first Black mayor, Harold Washington, and even worked in his administration.

The US Palestinian Community Network is a steering committee member of the Chicago Alliance Against Racist and Political Repression. We work closely with Blacks Lives Matter chapters in a number of cities and partner with Black4Palestine in Detroit and Dream Defenders nationally. We are allies with the Malcolm X Grassroots Movement in New York and we strongly support Black prisoners’ rights organizations in the San Francisco Bay area. Many other Palestinian and Arab organizations in the US also have great relationships with Black communities.

It is in the context of these alliances that we recall how Zionist organizations attacked the Movement for Black Lives in 2016 when it expressed solidarity with our people in Palestine and beyond, incorporating into its powerful and revolutionary A Vision for Black Lives policy platform an Invest-Divest section, which calls for support of boycott, divestment and sanctions measures in support of Palestinian rights, and suggests that Israel is an apartheid state.

And it is in this context that Marc Lamont Hill is being demonized today.

Zionists have always been terrified of #BlackPalestinianSolidarity, and have regularly attacked the Black liberation movement – whether the Black Panthers or the Malcolm X-era Nation of Islam or the Student Nonviolent Coordinating Committee – because of its solidarity and support for Palestinian liberation and self-determination and our right of return.

Marc Lamont Hill is a principled friend and comrade to Palestinians across the world, and must be immediately reinstated as a commentator at CNN. Palestinians and Black people in the US demand nothing less.

Hatem Abudayyeh lives in Chicago and is a National Coordinating Committee member of the US Palestinian Community Network (USPCN).