The escape of Bolivia’s ex-dictator, Jeanine Añez, is being organized by the main 2019 coup leaders along with the Pro Santa Cruz Civic Committee, all “under the complicity of some embassies of the country”, according to the Executive Committee of the Permanent Assembly of Human Rights of Bolivia (APDHB).

A statement released by the APDHB, and signed by the organization’s Vice President, Edgar Salazar Limachi, states that right-wing activist Amparo Carvajal has been coordinating the possible escape.

“500 years ago in the colonial period they abused us, also in the republic they abused and humiliated us.”

“The Executive Committee of the Permanent Assembly of Human Rights of Bolivia denounces before the Bolivian people that a possible escape of Mrs. Jeanine Áñez Chávez, who is being held in the women’s prison of Miraflores, is in the making. It is orchestrated by Jorge ‘Tuto’ Quiroga, Carlos Mesa, Luis Fernando Camacho, Samuel Doria Medina and the Pro Santa Cruz Civic Committee” reads the statement.

RELATED CONTENT: Bolivian Authorities: Áñez’s Prison Conditions do Not Pose a Danger to her Health

The APDHB says that it will be watchful in the event of any attempt to escape and maintains that it will accompany the victims of Sacaba and Senkata in the application of its statute before all national and international bodies “until those responsible for the massacres of 2019 are found”.

In recent days, pro-coup media has amplified pleas by Añez’s children and allies, asking that she be transferred to house arrest and making constant demands for the ex-dictator to be taken to specific medical facilities for specialized care. The same networks have been providing wall-to-wall coverage of Amparo Carvajal and Añez’s daughter, Carolina Ribera Áñez, particularly since the long-awaited GIEI human rights report was released last week.

In March, Añez had a plane ready to flee to Brazil but her plans were intercepted in a police operation and she was found in a house outside Trinidad, in her home department of Beni.

She had been warned about the warrant for her arrest by her former Minister of the Presidency, Yerko Nuñez, who was tipped off by former Prosecutor of La Paz, Marco Cossío, who was investigating the case. Nuñez was himself able to get away on a plane bound for Brazil, and is now a fugitive.

Añez is being investigated for the crimes of sedition, terrorism and conspiracy, charges that were later expanded to breach of duties and resolutions contrary to the Constitution and the laws.

Below is the statement released by the APDHB: 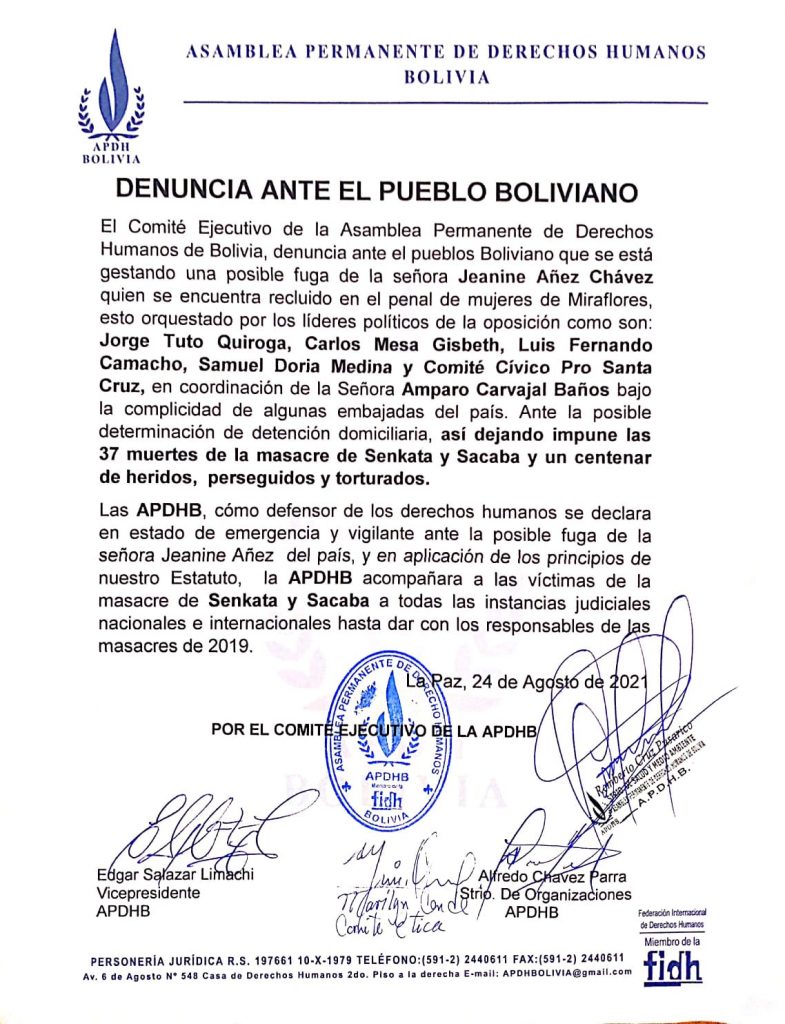