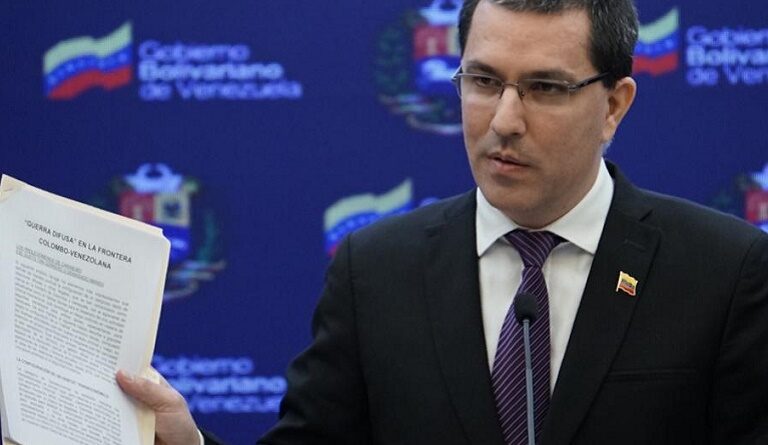 Jorge Arreaza, the Venezuelan Minister for Foreign Relations, dismissed Colombian accusations that the alleged attack against Iván Duque was ordered from Venezuela.

“Once again they use Venezuela to hide the tragedy of their country,” the Venezuelan foreign affairs minister wrote in a message posted on his Twitter account. He argued that Colombia is “full of violence and armed groups, whose economy and political class rely on drug trafficking, a repressive police, massacres, daily killings of social leaders, and exporting mercenaries for assassinations.”

On Thursday, in a joint press conference, the Colombian Defense Minister, Diego Molano, along with Attorney General Francisco Barbosa, assured that the alleged attack against President Duque was planned from Venezuela. He did not present evidence to substantiate his accusation.

For several weeks, Colombia has been immersed in protests demanding political change, an end to state-sponsored police repression, an end to the disappearances of protestors, and an end to the government only working for the interests of the United States and the elite. Additionally, the recent assassination of the Haitian ruler, Jovenel Moïse, was committed by a mercenary group of mostly Colombian ex-soldiers and was preceded by the visit of CIA Director, William Burns.

An international affairs analyst told Orinoco Tribune that “a cousin of the Colombian Minister for Defense, Diego Molano, was part of the assassination squad that ended the life of the Haitian president. This is an incident that has too many dark spots, and now US and Colombian authorities are joining the investigation, which adds to the confusion about the real forces and motives behind the political assassination.”