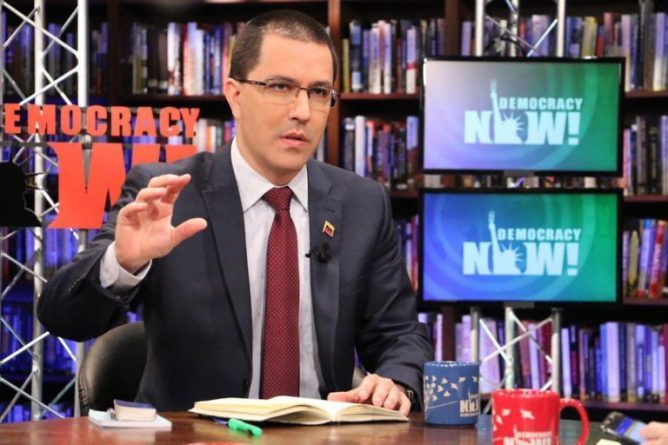 “The United States wants control of the Venezuelan economy that they controlled before the Bolivarian Revolution,” said Jorge Arreaza , Venezuelan minister of Foreign Affairs.

During an interview on the program Democracy Now!, produced by the US public broadcaster PBS, he said: “It’s all about oil, that’s why they want to overthrow the president (of the Republic, Nicolás) Maduro.”

He clarified that in the most complex incidents of last week-end on the Venezuelan border with Colombia there was not a single death and in the border with Brazil there was an incident with Pemon people that clashed with Venezuelan National Guard and resulted in 4 deaths and those responsible and the causes are currently under investigation.

“We are not going to allow a foreign aggression, we Venezuelans will solve our problems,” said Arreaza.

He noted that the international media have built a false history related to the acts of violence on the Colombian-Venezuelan border.

“When you watch TV, it seems that (Nicolás) Maduro gave the order to his soldiers to shoot at the people, and that is not true,” he said, adding that “we were very, very cautious to resist an invasion.”

In this regard, he lamented how leaders of the Venezuelan right follow instructions from the US Government. “And they beg for a military intervention against their people and country.”

We are not going to be Silent

He recalled that delegations from 60 countries joined this initiative in solidarity with Venezuela and to defend international law.