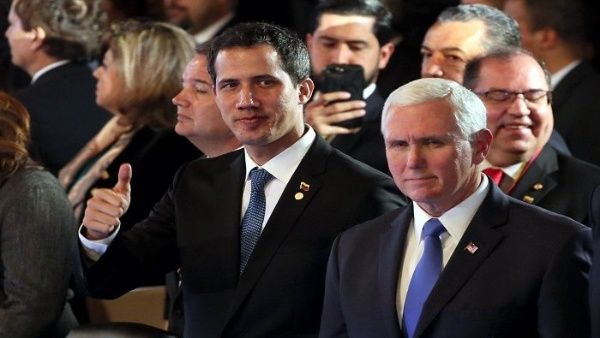 The executive order of President Donald Trump, which freezes the assets of the Venezuelan government in the US, was expressly promoted and requested since March by the agents appointed by Guaidó (the “attorney” José Ignacio Hernández and the “ambassador” Carlos Vecchio ) in order to guarantee the interests of the commercial import bourgeoisie and of the global trade corporations as alleged creditors of the Republic.

The mechanism proposed was the so-called “Asset Protection order” which, as Vecchio first stated in a letter presented in March, sought that the “government” of Guaido focus mainly on the “transition”.

While in May Hernandez himself confessed to the VOA that “we have requested an executive order” to protect the assets of the creditors. That is, bondholders. At that time, the lawyer warned that it was an exceptional measure when referring to criticism of anti-Chavismo factors that questioned the Trump administration’s delay in “protecting” the assets.

However, it was clear that following the decision of a Philadelphia appeals court, that on Monday, July 29, ratified Crystellex’s right to go after Citgo’s assets, to collect compensation for the alleged expropriation of a mining project, the situation changed. The judicial measure (which confirmed the order of the Delaware judge, Leonard Stark, taken just one year ago) raised the possibility that a kind of credit avalanche would be generated demanding the looting of the US subsidiary of PDVSA,CITGO.

But in that race the advantage would be on those who had their debts well-documented: that is, the bondholders, on the one hand, and the Russian state oil company Rosneft, holder of a secured loan with 50.1 percent of the shares of the Houston-based energy complex,

On the other hand, creditors such as Crystallex (despite the judicial measure in their favor) or others under similar conditions, which require compensation payments (such as ConocoPhillips), could be last in queue for the liquidation, since they must first resort to the judicial instance.

Paradoxically, the alert generated with the court’s decision in favor of the Canadian mining company, severely splashed the “attorney” Hernández, for being the author of the “thesis” that Citgo and PDVSA are mere instruments of the Republic or an “alter ego “, to guarantee the right of global corporations to seize those assets. In addition to his role as a kind of “double agent” for having previously acted as an expert paid by the corporations that now “confront” him as a representative of the Republic.

The scandal, in any case, has shown the motivations behind the creation of a parallel government in Venezuela, rather than policies are of a financial nature and have clearly manifested since the end of April in the debate about the management of external debt payments.

In this debate, the document disclosed by José Ignacio Hernández on July 1, which defines the principles for debt renegotiation, deserves special attention. Prepared by Ricardo Hausmann, Alejandro Grisanti and Hernández himself, the paper summarizes the 4 principles for the renegotiation of the Venezuelan debt endorsed by Guaidó in a hypothetical change of government, and is decidedly revealing regarding the objective of such process.
That is, to favor the alleged creditors of the State for commercial bills not paid or for damages caused by expropriations or nationalizations. It is, precisely, the import commercial bourgeoisie and the global corporations that operate as their allies. In this sense, the proposed model establishes an inclusive treatment of “all” claims whose origin would be commercial in nature (which must be reconciled to certify their amount) and equal, in the sense of not establishing differences with the commitments backed by titles and bonds.

However, the application of this proposal involves the preservation of the assets of takeover actions by bondholders, and especially that President Nicolás Maduro is effectively displaced from power.

Under the end of October, a payment of 913 million dollars, corresponding to the PDVSA 2020 bond, which could not be made (as a result of the same US sanctions), is foreseen, the activation of the seizure mechanisms in favor of the creditors and could result in the loss of control over Citgo. Nor by that date is it likely that Guaido has become head of state to be able to renegotiate the debt according to the Hausmann-Grisanti-Hernández plan.

This scenario probably boosted the “asset protection” option. The other factor, surely decisive, was the possibility that Rosneft would not be left behind and exercise its right to hold the 50.1 percent corresponding to the guarantee on the loan it was granted in 2015. A scenario, with the Russian oil company controlling one of the most important fuel suppliers in the United States, would be really cataclysmic for Donald Trump’s aspirations of reelection.

The debate on “commercial debt”
The discussion on the so-called commercial debt in the current context dates back to 2014, when former Minister (1992-93) Ricardo Hausmann, from his position as leader of a research center at Harvard University, raised the possibility of a suspension of payments to use these resources in the financing of imports. However, the substance of the argument aimed at creating the conditions for the business sectors to recover the levels of currency transfers to which they were accustomed and that exceeded 50 billion in 2012.

Later, in 2015, a Hausmann conversation was revealed with the businessman Lorenzo Mendoza, of Polar, which showed the existence of an “economic war” plan that contemplated agreements with the multilateral banks, through the IMF, to commit the Republic with credits of at least 60 billion dollars.

Polar’s interest in a change of government in Venezuela has not diminished and in this last stage it has been expressed (among other actions) with an active participation of the team that manages the Pepsi brand (which operates in Venezuela) in the attempt to deliver “humanitarian aid”on February 23. Also it was “sponsored” by Roberto Patiño Guinand (son of Marissa Guinand, one of his most important executives) was appointed coordinator of the volunteers who allegedly would distribute the aid.

Empresas Polar, which received foreign currency at an official rate for more than 6 billion dollars during the period of controlled exchange, claims debts for imports made without having effectively received the preferential dollars.

It also has direct interests in at least two cases of nationalizations made in 2010, in which it was a local partner of global investors. One of these is the one referred to the Fertinitro fertilizer complex (in Anzoátegui state), where it was a partner (with 10 percent of shares) along with a company of the Koch Brothers, the sixth largest fortune in the US. It is striking that this corporate group has used as current legislative agent and lobbyist, the current Secretary of State, Mike Pompeo, one of the most active promoters of the offensive against Venezuela in the Trump administration.