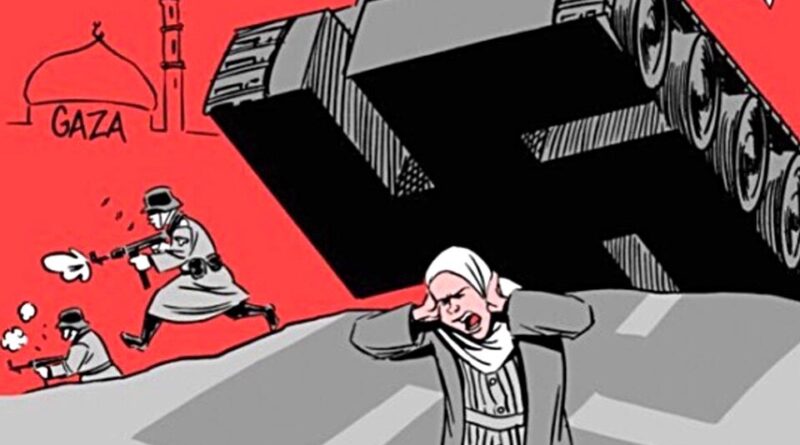 In his 1961 work The Wretched of the Earth, Frantz Fanon observed that “Two centuries ago, a former European colony decided to catch up with Europe. It succeeded so well that the United States of America became a monster, in which the taints, the sickness and the inhumanity of Europe have grown to appalling dimensions.”

With the ongoing expansion of the manufactured country of “Israel” into Palestinian lands, the European colonists are replicating this model of exporting their evils. This is what Israel’s current invasion of Gaza is about: destroying a population like how the Europeans destroyed the Natives, which will make way for the proliferation of capitalist Europe’s class inequality, systematic marginalization of groups the system deems undesirable, and perpetual push towards further warfare against those who still stand in the way of empire.

Capitalism, while the economic incentivizing force behind why Israel and its U.S. backers are facilitating these atrocities in Gaza, is ultimately only a symptom of colonialism. Capitalism began in Europe due to the colonial expansion projects which started in the 15th century, with the rise of the bourgeoisie then providing a political demand among Europe’s empires to grow the project ever further. The crisis of overproduction that capitalism inevitably creates makes it so that to survive, capitalism must perpetually expand into new markets. As the Marxist scholar Michael Parenti has observed, there can be no such thing as capitalism in one country.

Faced with this necessity to keep imposing itself upon other lands, the imperialists have had to invent justifications for their perpetual crimes. And their need to manufacture a cultural rationalization for their system’s evils applies both externally and internally, with the imperialist powers having to explain why they’re carrying out horrors abroad while justifying the oppression that takes place within the borders of the oppressor countries.

To get a sense of how the partisans of the bourgeois-colonialist order manufacture consent for this violent paradigm when it comes to Israel, see how rightist commentator Bari Weiss has spun Israel’s recent actions:

In the past 48 hours, according to the Israel Defense Forces, more than 1,500 rockets have rained down on Israeli cities. Those rockets are being launched by Palestinian Islamic Jihad and by Hamas, which has controlled the Gaza Strip since Israel unilaterally withdrew from it and forcibly evacuated every last Jewish resident from the territory in 2005. Israelis have gotten used to living life in a kind of perpetual war. On Tuesday, Nellie was on a call with a journalist in Tel Aviv who abruptly hung up because the sirens started wailing. A friend sent a photo of his mother crouched in a bomb shelter. All ok, he said. Friends across the country told me about huddling with their crying children in safe rooms. It’s fine, they insisted. But living like this is not fine.

Zionists tell these kinds of tragic stories, and pretend like their project to illegally occupy the territory of a sovereign nation isn’t the sole cause of these tragedies. The Zionist occupiers signed on to becoming bearers of the costs of war the moment they decided to annex Palestinian land. And no amount of solemnly listing off the violent tactics that the Palestinians use to resist their occupation will make this context untrue. The Zionists are simply reaping what they’ve sown, same as how the occupiers of indigenous land in the U.S. have brought this last year’s destructive riots upon themselves by carrying out unprovoked police violence against colonized peoples.

When apologists for the existence of America’s colonial police say things like “without police, we wouldn’t be able to fight all of the crime in this country,” they’re speaking to a social ill (widespread American criminality) that only exists because of the socioeconomic inequality which America fosters. They then portray the police state’s perpetual campaign to wage war against poor and nonwhite people as the only possible solution to this problem, same as how Bari Weiss portrays a continuation of Israel’s colonial war as the only solution to the problems that this colonial war perpetuates.

To retain cultural support for their occupations in the face of this lack of a moral high ground, the colonists portray these occupations as righteous in and of themselves. This requires the manufacturing of potemkin cultural identities for the settler-colonial countries that are perpetuating the bourgeoisie’s slaughter and exploitation.

For Israel, this operation to create the appearance of legitimacy has involved the co-optation of Jewish identity. More accurately, the perversion of Jewish identity. Israel’s apartheid system is not a system of Jewish supremacy, but one of white supremacy, where the light-skinned Ashkenazi Jews who hold an association with Europe are elevated to the most favored class. The brown-skinned Mizrahi and Sephardi Jews, as well as the African Jews, are oppressed by the Zionist project along with the Palestinians, denied the privileges that are granted to the country’s settler population. For this reason, it’s no surprise why the orthodox Jewish community very widely denounces Zionism, or why many Zionists are themselves antisemitic; Zionism — and therefore the national identity that Israel bases itself off of — can’t honestly be called a Jewish movement, but a white supremacist movement that hides behind the cause for Jewish safety to justify its crimes.

For the U.S., it’s been harder to craft what looks like a cohesive national identity, because the existence of the U.S. is based off of the settling of indigenous lands by European settlers who come from an entirely different continent. At least the Ashkenazi Jews within Israel have a claim to being associated with the land they live on. The even more absurd American settler-colonial project gets its sense of nationhood entirely through slogans, compulsory pledges of allegiance, flags, and sentimental founding father stories that were fabricated by propagandists seeking to rationalize the annexation of the continent.

Whereas the Jewish nation is real, the “American nation” exists only in the heads of whites who deliberately ignore the true history of the land they live on, and who don’t want to acknowledge that colonized peoples are the ones who deserve jurisdiction over this land.

Naturally within both of these occupied locations, contradictions constantly come out, ones which reveal just how bizarre and incoherent their cases for existing are. Benjamin Netanyahu, the leader of the state whose goal is supposedly to protect Jews from future harm, has promoted Holocaust revisionism by claiming that Hitler didn’t want to exterminate the Jews but rather expel them. (This may have been an attempt to justify Zionism’s goal of forcing the Jews to live in Israel, which is shared by the Zionists who are antisemitic.) An even more outrageous example of the Nazi-adjacent worldview which Netanyahu seems to privately hold occurred when Netanyahu’s son shared a KKK-amplified cartoon, one which portrayed Jewish people as being behind a sinister global conspiracy.

America’s equivalent contradictions can be found every time that a U.S. leader who supposedly seeks to make the country overcome its racist past reinforces this racism. Joe Biden clearly doesn’t care about advancing the goals of Black Lives Matter in any substantial fashion, seeing as how he’s been massively increasing the funneling of military equipment to police departments that use this equipment to kill nonwhites. The deeply antiblack legacy of the former “top cop” Kamala Harris, whose embrace of mass incarceration continues to worsen the effective military occupation of the country’s colonized peoples, also reveals how phony American “inclusion” is. America continues to be, and always will be, an oppressor country that’s committing genocide against those who haven’t been assimilated into the empire.

Liberals within both settler-colonial countries claim that their states don’t have to be abolished for the injustice to stop, that the U.S. and Israel can be altered so that they’ll cease waging war against the colonized. But these liberals will fail at these reformist endeavors, to be edged out by the extreme right-wing factions which seek to scorch the earth of those standing in the way of Manifest Destiny. Netanyahu has explicitly stated this goal of extermination, which extends from Israel’s war on Gaza to Biden’s war on Africans and Natives: “The weak crumble, are slaughtered and are erased from history while the strong, for good or for ill, survive. The strong are respected, and alliances are made with the strong, and in the end peace is made with the strong.”