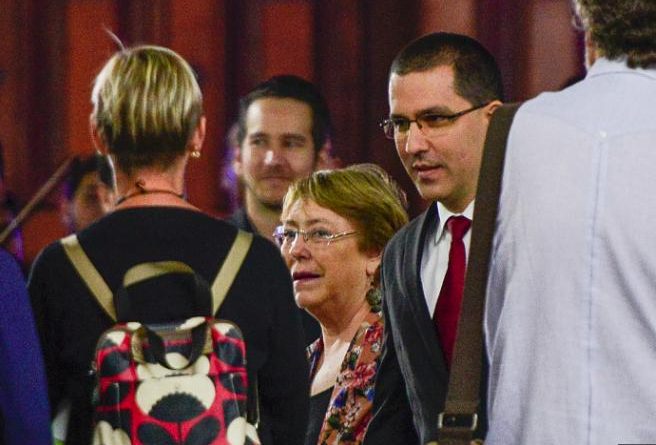 The work agenda for this Thursday, June 20, of the UN High Commissioner for Human Rights, Michelle Bachelet, has been very active today in Caracas and “distracted” (nothing is coincidental) the attention of Venezuelan News Outlet from the Cucutazo or Guaido-Gate, the corruption scandal dramatically affecting Juan Guaido’s already declining popularity.

In the morning she met at the Chancellery headquarters with the Ministers of Internal Affairs, Justice and Peace, Néstor Reverol; for Defense, Vladimir Padrino López, and Penitentiary Services, Iris Valera.

These were accompanied by the head of the UN in Venezuela, Peter Grohmann, the Executive Secretary of the National Human Rights Council of the country, Larry Devoe, and the Strategic Operational Commander of the Armed Forces, Remigio Ceballos.

RELATED CONTENT: Chancellor Arreaza Discusses the Impact of the US Blockade With Bachelet

Then she met with Ricardo Melendez, Aristobulo Isturiz and ministers from the social issues Vice-presidency. The top UN diplomat also met with Tareck William Saab, Attorney General of Venezuela, Maikel Moreno the Supreme Court of Justice President and with Alfredo Ruiz, the Ombudsman.

In the afternoon the Chilean diplomat went to the “Universidad Metropolitana” in the east of Caracas to meet with relatives of what anti-Chavismo calls “political prisioners” and the “victims” of the guarimbas promoted and finances by the anti-Chavismo in 2014 and 2017.

It is also planned that in the coming hours she will meet with President Nicolás Maduro.

It should be remembered that the former president of Chile will remain in the country for three days to learn more about the situation in the country as a result of the sanctions imposed by the US regime on the Venezuelan people.