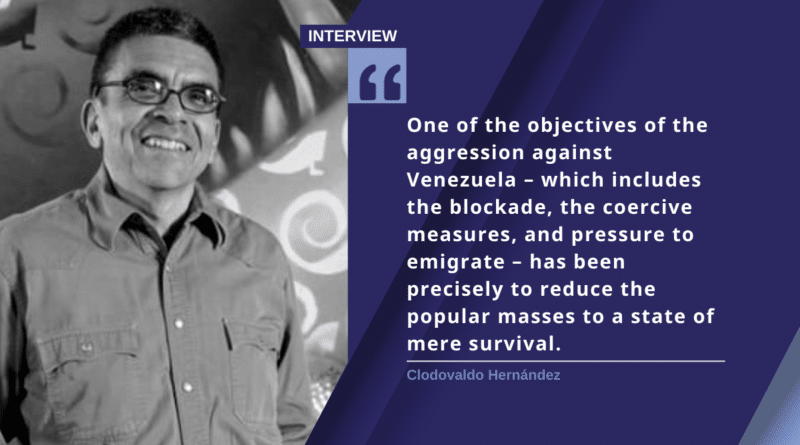 A seasoned analyst reflects on Guaidó’s spectacular demise and the upcoming regional and local elections.

On November 21, Venezuela will hold its 27th election since Chávez came to power. This contest will decide regional authorities such as governors and mayors. More importantly, however, the election will determine the fate of political gridlock in Venezuela, according to analyst Clodovaldo Hernández. In this interview, Hernández, who is a regular commentator at the influential website La Iguana TV and a writer for Ciudad CCS and CuatroF, discusses the upcoming elections and talks about self-proclaimed “Interim President” Juan Guaidó’s demise as a political actor.

The crisis and the sanctions have had a visible and well-documented impact on the Venezuelan people. However, their impact within Chavismo is more difficult to discern. In political terms, what are the effects on the government, on the one hand, and on the pueblo, on the other?

The political impact of the situation could have been truly devastating, but it has been mitigated for two reasons. First, the government has had an effective strategy. Second, the opposition is divorced from national and popular interests; is divided by political and economic factors; has very weak leadership; lacks coherent internal organization; and has a diminished presence on the street.

Nonetheless, the real impact of all this will be measured in the upcoming elections, since it will be the first time since 2015 that Chavismo will face the bulk of the opposition. The 2015 defeat of the revolutionary forces in the parliamentary elections was spectacular, and it precipitated the political crisis of 2016 through 2020.

In 2017 (constituent assembly elections), 2018 (presidential and municipal elections), and 2020 (parliamentary elections) Chavismo went to the polls uncontended or against relatively weak segments of the opposition, because the strongest opposition forces, the self-styled G4 [“Group of Four”], carried out the abstention plan that the Trump administration called for.

To understand the current panorama, we should add that the ruling socialist party [PSUV], despite having amply won the parliamentary elections of December of last year, still suffered a substantial drop in electoral participation when compared to the 2018 presidential elections. The recently deceased William Izarra did the math: the PSUV dropped from 6.2 million in 2018 to 3.5 million in 2020. In other words, 2.7 million people – or 32.9% – stopped voting PSUV.

However, only the November election results will demonstrate the real impact of the unilateral coercive measures on Chavismo as a political movement. As for the impact on the people, I agree that it has been devastating. The hardest-hit sector is the one that is not able to get an income in US dollars, while those who have secured dollar incomes are experiencing a relative improvement in their living conditions. This is made evident by the economic activity in the streets.

The strategy of the US-allied right has failed. The most visible proof is that this sector had to sit down and negotiate with the government in Mexico. However, the failure of their strategy was already evident toward the end of 2019. Now, with the opposition fully participating in the November elections, we are entering a new epoch. Why did the Guaidó strategy fail so spectacularly at a time when an important sector of the population was obviously fed up with the government?

Guaidó’s demise happened much faster than expected. Let’s examine the factors that led to his strategy’s failure.

The first factor is that Guaidó was a leader without a history, without a track record. He was an obscure representative who got to the National Assembly with just 97 thousand votes from the small state of La Guaira. On top of that, he didn’t win the position because of grassroots work, but rather rode on the crest of the MUD’s victory in the 2015 elections. Perhaps a more seasoned leader in his position might have made things turn out differently.

The second factor is that the 2019 opposition coalition was already fractured due to prior mistakes, including the attempted parliamentary coup in 2016, the violent “guarimba” riots in 2017, and the assassination attempt of President Maduro in 2018. Other issues that divided them were the call to abstain in the 2017 constituent elections and in the 2018 presidential elections.

The opposition forces’ lack of cohesion was evidenced in the way that the “Guaidó plan” was implemented by fiat. That is to say, Guaidó was made their leader without consulting several of the most important opposition forces, and with only the backing (and orders) of the US State Department.

The third factor in the rapid attrition of the Guaidó forces is the man’s weak leadership. He was always bound by his “factory settings.” He is a product of political marketing and has very limited oratory skills, no charisma, and is without a coherent discourse or program despite the backing of the US, other right-wing governments, and international organizations (and despite the support of the mainstream media).

The fourth factor that led to Guaidó’s failure was the April 2019 coup d’etat, which was based on delusional calculations about his political, military, and on-the-street leverage and force.

Finally, Guaidó has lost much credibility due to his evident anti-national stance, as a promoter of the unilateral coercive measures, and by the rampant corruption within his so-called “government.”

The talks in Mexico have been halted for now. But how did it happen that the most radical opposition, the G4, agreed to sit down with the government in the first place?

The fact that the dialogue took place is a victory for the government since it implies its legitimacy. Nonetheless, I have to say again that the defining moment will be the upcoming elections. If the opposition obtains significant quotas of regional power, it is likely that the US and the European Union will proceed to a de-intensification of the unilateral, coercive measures.

In those circumstances, the negotiations may begin again. However, if the opposition performs poorly, they will likely claim “fraud” and the opposite could happen. That is, the rapprochement would fail and reprisals could intensify.

The protagonism of the Venezuelan popular movement (workers, communards, and other social forces) has faded during recent years. It’s been overshadowed by the country’s situation and by an official discourse that sidelines the protagonism of the people. In your opinion, why has the pueblo as a political subject taken the back seat in recent years?

One of the objectives of the aggression against Venezuela – which includes the blockade, the coercive measures, and pressure to emigrate – has been precisely to reduce the popular masses to a state of mere survival. In that state, they have neither the time, the energy, nor the willingness to play the role that corresponds to them in a participatory democracy.

However, in key moments, the popular movement has played an important role. It resisted provocations such as Guaidó’s self-proclamation as president, the “humanitarian aid” fiasco in February 2019, the coup attempt in April 2019, and Operation Gedeón in 2020.

Additionally, popular organization has been key to the relative success of CLAP subsidized food bag distribution program. In this way, the pueblo has played an important role in resisting the efforts to break the country through hunger.

All this being said, it is true that there has been a process of depoliticization. It has roots not only in people’s living conditions, but also in the rise of corruption both in the ranks of the revolutionaries and the opposition, and in the non-socialist attitude of many PSUV leaders and other public figures.

After several years without internal PSUV elections, the party held primaries in August as part of the preparation for the November contests. At that time, you claimed that the results in Simón Planas in Lara state – where a communard candidate defeated a candidate endorsed by PSUV higher-ups – were inspiring because it shows that Chavismo can overcome its “internal deformities.” Can you tell us more about your argument?

In my opinion, Simón Planas is a “demonstration” of what is happening in many places where the PSUV operates. It just so happens that that municipality has greater notoriety due to its history.

There is a low-intensity confrontation between bureaucratized Chavismo that has, to a great extent, become corrupt and the Chavismo that continues to search for the Holy Grail of 21st Century Socialism, which crystallizes itself in the idea of the commune.

This is a long-due debate that was postponed due to Chávez’s death. Chávez was the great engine of ideological reflection within the revolutionary movement. Additionally, the struggle for survival that began following Chávez’s death is a factor that has put the debate on hold. Nonetheless, Chavismo’s socialist vocation continues to run deep, and it re-emerges in situations such as the recent primaries.

I believe that this resilience is perhaps the most hopeful sign of our times.

There are internal problems and contradictions within any process of change. Beyond the struggle to bring the PSUV back to its original project, as happened in Simón Planas recently, what strategies would you propose in order to correct the internal deformations of Chavismo?

As someone who is not a PSUV militant, when I look at the situation from the outside, the main internal deformation that I perceive is a moral one. Unfortunately, a rapacious appropriation of public patrimony has become normalized, as some recently denounced cases show us.

What concerns me most about this situation is the age of the protagonists of these criminal acts. Many of them are young people who grew up with the revolution. This behavior has its roots in ideological deformations due to poor political formation. Many so-called PSUV “cadres” are not really cadres, but opportunistic individuals or the representatives of interest groups that emerged in the shadow of the revolutionary movement.

Of course, there is no easy solution to this problem, but political education with an emphasis on socialist principles and a willingness to punish deviant behavior will be key. If there is impunity, political deviations will continue.

What would be the consequences (for both the government and the people) of an electoral result heavily favoring the PSUV bloc, on the one hand, versus one favoring the opposition, on the other?

While it is important to analyze scenarios, I would like to begin by emphasizing that we are entering a speculative terrain here.

If the government were to sweep these elections, it is likely that the worldwide campaign to delegitimize the Bolivarian Process would be relaunched, and that the US and Europe will try to resume and even intensify the blockade and the unilateral and coercive measures.

Should the outcome be more balanced, an opportunity for stabilizing the country may open up, and opposition parties may be encouraged to remain on an electoral, peaceful path. They would do so with a view to staging a presidential recall referendum in 2022 or – if they show even more strategic abilities – with an eye on the 2024 presidential elections.

Finally, if there is an electoral debacle for the PSUV and its allies, if the opposition has a triumph comparable to its 2015 victory, they might be inclined to instigate a new political crisis. This might happen if the internal opposition and, above all, the external factors that control it, interpret the electoral results as irrefutable proof that a change of government is imminent and viable.