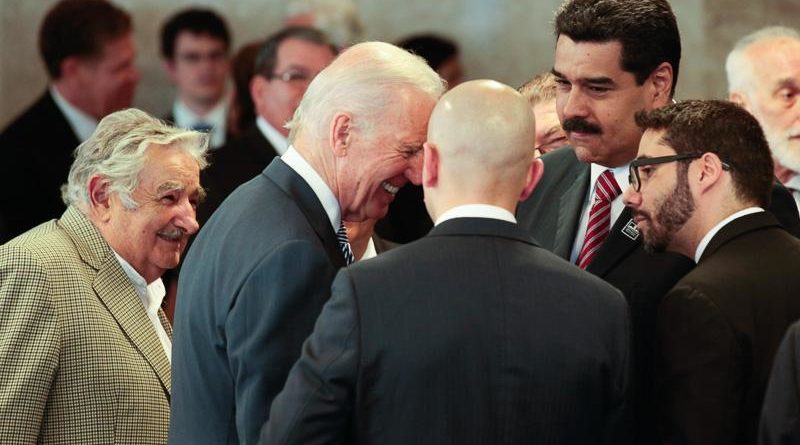 The White House insisted that Trump “has not lost confidence” in opposition leader Guaido.

“Trump talks tough on Venezuela, but admires thugs and dictators like Nicolas Maduro. As President, I will stand with the Venezuelan people and for democracy,” Biden tweeted on Sunday evening.

The former vice president has consistently backed the Trump administration’s campaign to oust President Maduro, echoing Trump in recognizing opposition leader Juan Guaido as “interim president” of Venezuela. Biden has also supported the unilateral US embargo against Venezuela, which experts have criticized as “collective punishment” causing tens of thousands of deaths. Last year, he told the Council on Foreign Relations that he would “push for stronger multilateral sanctions” against the Caribbean country.

Biden launched the attack in response to Trump’s Oval Office interview with Axios on Friday, in which the president vowed to “maybe think about” a meeting with Maduro.

The US leader also revealed that he “wasn’t necessarily in favor” of recognizing Guaido as Venezuela’s head of state in January 2019, which he said “was [not] very meaningful one way or the other.”

After proclaiming himself “interim president,” Guaido led several failed attempts to oust the Maduro government by force. The opposition leader has faced growing scrutiny amid a string of corruption scandals and, most recently, his alleged involvement in a botched paramilitary invasion on May 3 and 4.

The controversy over Venezuela comes in the wake of the release of former National Security Advisor John Bolton’s memoir on his time in the Trump White House.

In the book, Bolton said that Trump had become increasingly disillusioned with Guaido, whom he dismissed as “weak.”

“By spring, Trump was calling Guaidó the ‘Beto O’Rourke of Venezuela,’ hardly the sort of compliment an ally of the United States should expect,” he wrote.

Trump responded to the memoir dismissing Bolton as a “nutjob” and the “dumbest human being on Earth” for helping orchestrate the 2003 Iraq invasion as the Bush administration’s ambassador to the UN.

On Monday, the White House appeared to walk back the president’s remarks, insisting that “he has not lost confidence at all” in Guaido.

“Nothing has changed. He continues to recognize Juan Guaido as the leader of Venezuela,” White House press secretary Kayleigh McEnany said in a news briefing.

Trump, for his part, declared he “will always stand against socialism and with the people of Venezuela” and would “only meet with Maduro to discuss” the latter’s “peaceful exit from power.”

The US leader did not, however, comment on Guaido, whom he hosted at the White House in February.