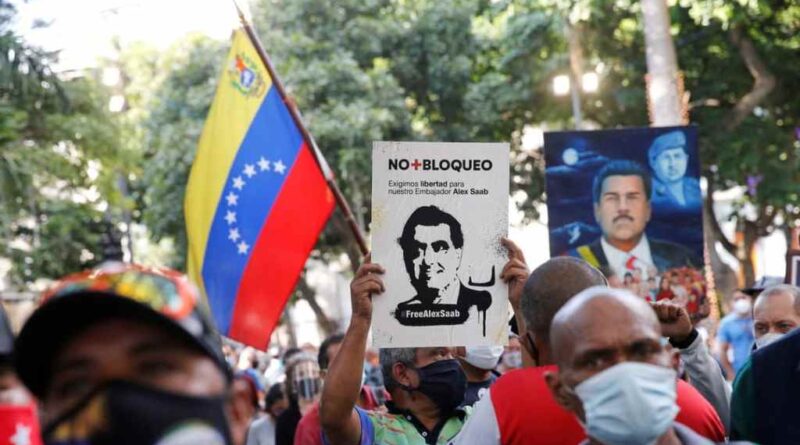 The Biden administration on Oct. 16 kidnapped Venezuelan diplomat Alex Saab from the West African country of Cape Verde, in blatant violation of international law. Under U.S. pressure, Saab had already been imprisoned and tortured in Cape Verde for 16 months.

“On a flight chartered by the [U.S.] Department of Justice, in which the Cape Verdean authorities had no control that could guarantee the safety of the Venezuelan diplomat, because they do not have a bilateral extradition treaty with the North American nation, Alex Saab arrived Saturday night and was transferred to a high-security prison in Miami,” teleSUR reported.

Saab is Venezuela’s Deputy Ambassador to the African Union, as well as an official representative to negotiations with the right-wing opposition planned in Mexico. Under the Vienna Convention, he has diplomatic immunity from arrest, even in wartime.

None of that matters to the representatives of the arrogant, racist U.S. empire, which is willing to starve and deprive millions of Venezuelans of medicines during a global pandemic, using sanctions aimed at destroying the pro-socialist Bolivarian government of President Nicolas Maduro.

Saab was expected to appear in a Miami court for arraignment on Oct. 18. In protest of the kidnapping, the Venezuelan government suspended negotiations with the U.S.-backed opposition. Jorge Rodriguez, leader of the Bolivarian government delegation, declared the decision “an expression of our deepest protest against the brutal aggression against the person and the investiture of our delegate Alex Saab Moran.”

RELATED CONTENT: The US Flies Alex Saab Out From Cabo Verde Without Court Order or Extradition Treaty

The kidnapping of Ambassador Saab is yet another example, if one is needed, that in international affairs Joe Biden is ploughing full steam ahead with the warmongering policies he inherited from Donald Trump. On Venezuela, like China, there is not a whisker’s difference between these imperialist politicians.

“The Government of the Bolivarian Republic of Venezuela condemns the United States Government’s kidnapping of Venezuelan diplomat Alex Saab, in complicity with Cape Verdean authorities, who tortured him and arbitrarily held him prisoner for 491 days, without an arrest warrant of due process, in violation of the laws of Cape Verde and the Vienna Convention. This crime was condemned by the United Nations and various countries around the world.

“The information has been confirmed by the diplomat’s family members who were recently forbidden to enter the country.

“As is widely known, Alex Saab is a permanent representative of our government at the Dialogue Table being held in Mexico with the Venezuelan opposition, through the facilitation of the Kingdom of Norway and the accompaniment of the Russian Federation and the Kingdom of the Netherlands; therefore this crime is also an attack against the good development of the negotiations.

“The Government of the Bolivarian Republic of Venezuela deplores this serious violation against the human rights of a Venezuelan citizen, who is invested as a diplomat and as a representative of our country to the world. This fact sets a dangerous precedent for international law.

“We hold the authorities of Cape Verde and the Government of President Biden responsible for the life and physical integrity of Alex Saab and as a sovereign nation we shall reserve the actions we will take accordingly.

“We are grateful for the solidarity of the noble people of Cape Verde and Africa, as well as the U.S. and world social movements, who have raised their voices in rejection of this crime. The struggle for the dignity of this innocent man, who is protected by international law, shall continue and intensify.”

Negotiating food for the people
Saab was arrested by Interpol and Cape Verdean authorities on June 12, 2020, during a stopover to refuel on the island nation. He was on his way to visit Iran — another country whose independence causes U.S. bosses and politicians to foam at the mouth — to secure food and medical aid for the Venezuelan people.

President Maduro pinpointed the reason for Saab’s arrest on Sept. 23: “They kidnapped Alex Saab and have done everything possible to destroy the Local Supply and Production Committees,” known by the Spanish acronym CLAP, which provides food assistance to more than 7 million Venezuelan families affected by U.S. sanctions.

The arrest warrant against Saab is based on U.S. Treasury Department claims that the CLAP program is a “money laundering operation.” The U.S. has presented no evidence to back up its charges, winning delays each time it was due to back up the charges in court.

“The Swiss government, after a two-year investigation into Saab’s transactions with Swiss banks, concluded on March 25 that there was no money laundering,” noted the Orinoco Tribune.

But an Oct. 1 article in the “capitalist tool” Forbes magazine revealed that U.S. officials hope to force Saab to “shed light on Venezuela’s post-sanction economic work.”

This means U.S. officials hope to force Saab to reveal information they can use to undermine the solidarity networks that have developed between Venezuela and some of the three dozen other countries living under illegal U.S. sanctions — which include an estimated one-third of the world’s population.

Forbes reported, “Much to the annoyance of the Trump and Biden administrations, Saab, a creative and capable businessman, found a way to navigate Venezuelan trade in sectors like food, oil and gold between the cracks of U.S. oversight.

“For many in Venezuela, this [Saab’s activities] is not criminal — Saab is a hero, and his efforts overseas are the actions of a man trying to feed and house the hungry and homeless.”

Acts of war
The United Nations, the Economic Community of West African States, the African Bar Association, and governments around the world called on Cape Verdean authorities to release Saab and protested that there was absolutely no legal basis to extradite him to the U.S. More than 15,000 people signed an international petition to free the Venezuelan diplomat.

This is far from the first time Washington has illegally kidnapped foreign leaders and officials. Saab’s extradition immediately brings to mind the March 1, 2004, kidnapping of Haitian President Jean-Bertrand Aristide by U.S. soldiers, who deposed him in a coup d’etat and put him on a plane to South Africa.

In recent years the U.S. has escalated these attacks.

Simon Trinidad, international representative of the Revolutionary Armed Forces of Colombia-People’s Army (FARC-EP) and an official member of the negotiating team at peace talks in Havana, was extradited to the U.S. Despite all bogus drug trafficking charges being dropped after three trials, Trinidad was nevertheless convicted of “conspiracy” and is today imprisoned under the torturous Special Administrative Measures (SAMS) at a Federal prison in Colorado.

Then there was the years-long siege of journalist and WikiLeaks founder Julian Assange at the Ecuadorian Embassy in London. Assange similarly has been tortured in isolation by British prison authorities and faces extradition to the U.S., even though the charges used to justify his arrest were dropped long ago.

And there are more cases related to the fight against sanctions, where foreign nationals are charged with violating provisions of the (illegal) U.S.-imposed sanctions on countries it seeks to destroy. Such was the case of Meng Wanzhou, a Chinese businessperson who was detained in Canada for nearly three years before finally winning the right to return home to China in September.

And of course, there was the Trump regime’s illegal seizure of the Venezuelan Embassy in Washington, D.C., in 2019, including the arrest of four embassy defenders.

Sanctions are an act of war. So are violations of the international and the universally recognized rights of diplomats. The U.S. empire’s political gangsters carry out these lawless and vile acts because, they laugh to themselves, “Who will dare to stop us?”

We must dare — to struggle and to win.