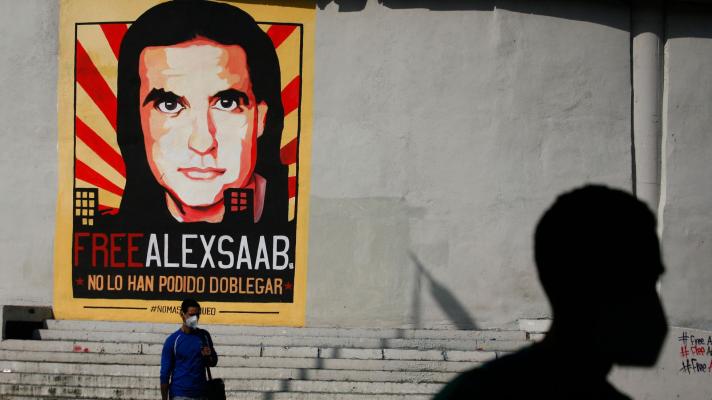 In multiple venues, including meetings within the framework of the dialogue process taking place in Mexico, the government of the Bolivarian Republic of Venezuela demanded the immediate and full release of Alex Naín Saab Morán. In addition, there has been a long list of diplomatic communiqués, as well as statements of foreign governments demanding his release.

However, in spite of his diplomatic status and the complaints about non-compliance with due process, on October 16, 2021, it was made public that Saab was extradited to the United States by the government of Cape Verde.

Coercion
When in 1995 the Food and Agriculture Organization (FAO) of the United Nations analyzed what had been the result of the “sanctions” that, through due process, had been imposed on Iraq, it concluded that the only thing that had been achieved was that children were growing less, becoming sicker, and in general that the population was suffering greater hunger.

This horror is an objective that is admitted as collateral damage in any sanctioning process, and when the US applies its unilateral coercive measures, it not only knows it but also acknowledges it. Thus, for example, there were numerous statements by high-ranking spokespersons who, during the administration of magnate Donald Trump, warned that Venezuela would surrender because of the hunger, desperation, chaos and misery that would be created by putting pressure on the government.

In this context, the Local Supply and Production Committees (CLAP) were created in 2016 to circumvent the ravages of the economic war, speculation and hoarding that prevailed in the country and to confront the process of chaotization, managing to strengthen the popular organization as well as to protect the most threatened rights of the weakest sections of the population.

In 2017, the discourse against the CLAPs intensified, directly associated with the figure of businessman Alex Saab due to his association with the program as a food supplier contracted by the government of Venezuela, accusing him of purchasing overpriced and poor quality products. In spite of this and the fact that the program was frequently attacked by the opposition press, the program went ahead, achieving a high level of acceptance by all sectors that saw it materialize and benefited from it.

Its efficiency was such that it became in itself a target of attack even in reports by the United Nations High Commissioner for Human Rights, at that time headed by Jordanian Zeid Ra’ad Al Hussein (a member of the Jordanian royalty) who, without citing reliable sources, emphasized its politicized character and its failure to cover all the requirements of the right to food, something that was never the objective of this program. In 2019, it became a specific target in Washington’s pressure campaign against Caracas.

As narrated by Alex Saab, in an interview given to RT in 2021, his link with the Venezuelan government began in 2011 when he invested for the first time in the country, a relationship that was maintained and strengthened when in 2015 he was called to be one of the businessmen who would have the contracts related to the food boxes delivered by the CLAPs.

In this way he subsequently became one of its largest suppliers at a time of high persecution and criminalization of Venezuela’s commercial relations, which is why he was appointed special envoy of the government of the Bolivarian Republic of Venezuela in April 2018.

Subsequently, on July 25, 2019, the Office of Foreign Assets Control (OFAC) of the US Treasury Department published Executive Order 13850 by which it issued unilateral coercive measures on a list of sanctioned individuals and entities that included Alex Naín Saab Morán, specifically pointing him out for his activities related to imports required for the CLAPs.

One of the arguments used in the media was to denounce that the CLAPs were not the food program that every Venezuelan knew that reached, with greater or lesser frequency, their homes, but rather a “web of corruption” in which Saab Morán played a central role.

In 2019, when “sanctioning” Saab, OFAC cited a statement by the then Secretary of the Treasury, Steven Mnuchin, who stated that:

Alex Saab collaborated with close associates of Maduro’s inner circle to manage a large-scale corruption network that they ruthlessly used to exploit the starving population in Venezuela. The Treasury Department is taking action against those behind Maduro’s sophisticated corruption schemes, as well as the global network of shell companies profiting from the food distribution program, controlled by the ex-regime’s military forces.

In general, as we have mentioned earlier, coercion of governments affects the population, especially its most vulnerable sectors, such as women and children, by exacerbating imbalances in terms of income distribution and promoting illegal and unethical economic practices, among other problems. This happens because they restrict the normal economic participation of the State in the international space in a globalized world; such “commercial freedom” is indispensable to guarantee rights.

Now, when these include certain people as individuals, several issues arise. The first is the right to honor and the presumption of innocence, whose bases are established in the corpus of Human Rights. This brings with it others, such as the territoriality of criminal rules and the right to a fair trial, all of which are denied by virtue of the criminalization that has been advanced and without access to habeas data for such measures.

In September 2019, the Treasury Department included in the OFAC list three individuals and 16 companies for their connections with Saab and his business partner, Álvaro Enrique Pulido Vargas.

The arrest
On June 12, 2020, during a stopover to refuel a flight from Tehran to Caracas, the authorities of Cape Verde arrested Alex Saab in an event that the defense considers an unprecedented judicial overreach, since it deviates from any legal extremes inasmuch as there was no Interpol warrant in due form at the time, but rather it was prepared upon request.

During the days following his arrest, the matter acquired media weight and the version in favor of his extradition was based mainly on statements made by the former Attorney General of Venezuela and fugitive from Venezuelan justice Luisa Ortega Díaz.

Since then, there have been important communiqués on this issue from the government of Nicolás Maduro, foreign chancelleries and international agencies.

There are many irregularities that, as we can see, were highlighted by different instances and constantly denounced by the Venezuelan government. Among them, the repeated complaint that Cape Verde does not recognize the jurisdiction of ECOWAS despite the fact that it is a member of that organization and has accepted full membership in the Tribunal.

At the same time, on the alleged acts committed, the pronouncements of other instances have indicated that there is no evidence. Thus, in March 2021, a spokesman for the Swiss prosecutor’s office, where he was also under investigation, indicated that the businessman is linked to 22 accounts in the Union of Swiss Banks (UBS), one of the largest capital management firms in the world and that all of them were raided, procedures were carried out, and the Geneva prosecutor’s office closed the investigation -without determining the commission of any crime- against Alex Saab for suspicion of money laundering through accounts in Swiss tax havens.

The Venezuelan government maintained his diplomatic status and even raised Saab’s profile by appointing him in December 2020 as Plenipotentiary Ambassador of the Venezuelan Mission to the African Union, based in Ethiopia, and in September 2021, as head of the Venezuelan government delegation to the dialogue process taking place in Mexico, Jorge Rodríguez, announced the decision to incorporate the diplomat Alex Saab as a full member of the delegation, as well as a full delegate to the Dialogue Table that was approved in the partial agreement, in a maneuver of political pressure so that the release of Saab would be resolved within the ambit of the negotiations.

The vices
Saab’s defense has repeatedly reported that his human rights have not been respected and that at least 12 violations of Cape Verdean constitutional norms have taken place in a process of an evidently political nature, which seeks to escalate the coercion on Venezuela to another level, as well as to discourage businessmen who do business with the government or who might be interested in supporting them.

In an article published in August 2021, attorney Laila Tajeldine, who has participated in Saab’s defense, pointed out:

• Saab was forced to get off the plane in which he was traveling and detained without the existence of an arrest warrant or Interpol Code Red notice.
• In this act, the inviolability of the figure of the Special Envoy foreseen in the Vienna Convention on Diplomatic Relations ratified by Cape Verde was also violated.
• Saab’s preventive detention was longer than what is allowed by the Cape Verdean legal system.
• On at least two occasions it was necessary to request the resubmission of the extradition request as the extradition requests were flawed.
• There is no extradition agreement between Cape Verde and the United States.
• The Supreme Court of Cape Verde departs from the decisions of the ECOWAS Court of Justice, which has the authority to judge human rights violations and disputes between African states.

In light of the vices surrounding the case, on October 16 it was announced that Cape Verde had approved Saab’s extradition to the United States. This fact was condemned by the Venezuelan government as a kidnapping of Alex Saab by the US authorities with the complicity of the Cape Verdean government.

This is a new record of the systematic violations of international law surrounding the case with the political objective of criminalizing Venezuela.