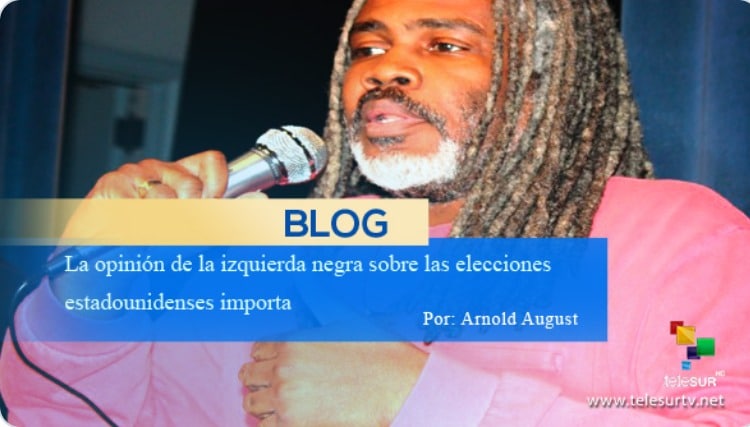 Netfa Freeman is an organizer for Pan-African Community Action and the Coordinating Committee of the Black Alliance for Peace. He is also a radio talk-show host of the popular D.C.-based Voices with Vision and an active supporter of the Cuban and Bolivarian revolutions. In an exclusive online interview for teleSur from Washington D.C., Freeman asserted that the principal message he has for readers is: “The Black left perspective is that our struggle is for power.” In response to a question regarding illusions about the Democratic Party as an alternative to the Trump/Republicans, he stated:

“The only way for the Black working class in the U.S. to realize justice through presidential elections is by waging a relentless struggle to build a formidable alternative party to both capitalist, imperialist, Republican and Democratic parties.”

He is of course referring to a party that includes all races.

Everything Against the Two-Party System. Everything…

The “lesser evil” narrative is overbearingly and pervasively poisonous in U.S. politics. It inevitably leads to a vicious and continuous ideological war, not restricted to presidential election cycles. Freeman continues:

“Black people in the U.S. must once and for all reject the false notion of a lesser evil between the candidates of those two parties. Both of them embrace and sustain genocidal policies against people of African descent domestically and internationally. Unlike Trump, the record of anti-Black policies that Joe Biden [as a Senator in Congress since 1972] has supported goes back to 1975: as a racist supporter of segregation and in 1994 co-authoring a ‘crime’ bill’ that helped to proliferate the mass incarceration of Black and Brown people. While Biden was Vice President under Obama, the value of military equipment transferred to domestic police departments increased by 2,400%,and has been used primarily against Black and Brown communities.”

RELATED CONTENT: With Secret Police, Trump’s Practicing Fascism in the Streets of our Cities

The “Lesser of Two Evils”? Some straight Talk…

When asked to elaborate further on the “lesser of two evils” pressure, his response consisted of a stinging indictment of the U.S. political system:

“I always say that an unspoken prerequisite for being president of the U.S. is being able to bomb babies in another country and pretend that there are no political prisoners in the U.S., while several have been languishing in prison since the 70s.”

Does his reference to “bombing babies” include the war Obama initiated in 2015 against Yemen? Or was it only the tip of the iceberg that was revealed when a U.S.-manufactured bomb killed 40 Yemeni infants? Who can forget the horrific scenes of the bipartisan American war against Vietnam when the world witnessed women and babies lying in ditches after being massacred in Mai Lai by Marines? Freeman may use shock tactics sometimes, but is it not valid to use such methods to shake up the smug acceptance of the two-party system and its corollary, “the lesser of two evils”?

Mainstream media and both corporate parties never mention the more than 50 political prisoners in the U.S. The majority of them are Black and Indigenous, some were involved in the Black Panther Party, Native movements and other revolutionary movements in the 1960s and 70s, and more recently as a result of the demonstrations after the police murder of the Black youth Mike Brown in Ferguson, Missouri (2014) and the stand off in Standing Rock (2016) by Indigenous and their allies. In fact, they are the survivors of the state’s assassination program carried out against their leaders. If there is one people in the world who can fully appreciate the refusal of the American left to overlook these political prisoners, who are festering and still resisting in the cruel and violent jungle of the U.S. prison system, it is the Cuban people. The entire Cuban nation, with the full support of countries such as Venezuela, refused to accept as inevitable that the Cuban Five be abandoned.

Since the modern-day lynching of George Floyd in May, one of the most important visions arising out of the current rebellion is the following: the struggle in the U.S. against the racist state cannot be separated from its imperialist wars abroad, as Freeman graphically mentioned above. The most persecuted and oppressed population in the U.S., African Americans, are currently in the very forefront of selflessly insisting that there can be no peace in the U.S. unless there is peace for other peoples in the world that are victims of U.S. aggression.

Malcolm X on the 2020 Presidential Elections

Was it not Martín Luther King Jr., in speeches given just before his assassination, who linked the domestic situation with the U.S. war against Vietnam? War, militarism, racism and MLK’s concerns about generalized across-the-board poverty are carefully censured from the current debate being fostered by the ongoing revolt. The U.S. elite cynically retains only MLK’s “I have a dream” speech, thus conveniently white-washing his legacy and soothing the conscience of liberals by providing them with a buzz word for cooptation.

Similarly, Malcolm X is cited by liberals very vaguely as if his thinking and action were some romantic notion of days gone by. However, his legacy carries on the in the minds and hearts of millions of Americans of all races. Malcolm X spelled it out long ago:

“The white conservatives aren’t friends of the Negro, but they at least don’t try to hide it. They are like wolves; they show their teeth in a snarl that keeps the Negro always aware of where he stands with them. But the white liberals are foxes, who also show their teeth to the Negro but pretend that they are smiling. The white liberals are more dangerous than the conservatives; they lure the Negro, and as the Negro runs from the growling wolf, he flees into the open jaws of the ‘smiling’ fox. One is the wolf, the other is a fox. No matter what, they’ll both eat you.”

Fidel Castro knew who to meet during his visit to New York in 1960: he met with Malcolm X.

However, let us leave the last word to a “neutral” expert on American politics: the non-black but well-known Australian journalist Caitlin Johnstone.

“If these protests end it won’t be because tyrants in the Republican Party like Donald Trump succeed in making the case for beating them into silence with the U.S. military. It will be because liberal manipulators succeeded in co-opting and stagnating its momentum.”