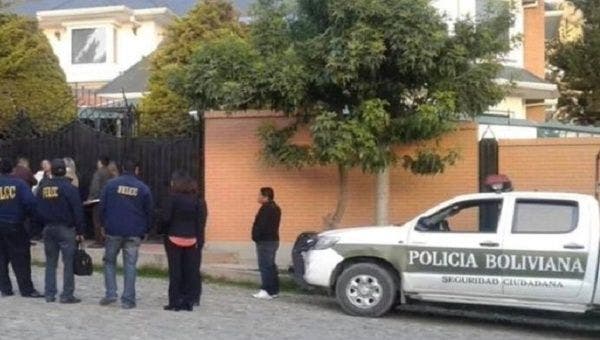 The government wants to use a Cuban property after it was unable to expropriate private clinics.

July 24, 2020.- Bolivia’s coup-born regime led by Jeanine Añez Tuesday raided a Cuban-owned clinic in La Paz. This raid violates the Vienna Convention, which establishes the principle of extraterritoriality for real estate owned by a diplomatic legation.

“The raided property is owned by Cuba, so it could not be entered, according to international law… This action could cause an international impasse,” local outlet Sin Mordaza commented.

In recent weeks, due to his regime’s inability to resolve the epidemiological crisis, the Interior Minister Arturo Murillo threatened to expropriate private clinics. However, in less than 12 hours, after a harsh pronouncement by Bolivian businessmen, he backed down.

On Tuesday, Murillo was also emboldened but against a clinic that the Cuban mission established years ago. Bolivian media transmitted images of the minister opening the doors of the building himself and entering to show the state-of-the-art medical equipment.

To justify his arbitrary action, he said that this health center was used by former President Evo Morales and his collaborators.

While Cuba does not relinquish ownership of a legitimated purchased property, its authorities pointed out that the clinic and its equipment can save the lives of the Bolivian people.

Amidst a pandemic, which “requires urgent and joint efforts of cooperation and solidarity, and without renouncing the ownership of the Cooperative’s Clinic, that institution will assist the sick while the crisis lasts,” the Cuban Foreign Affairs Ministry stated.