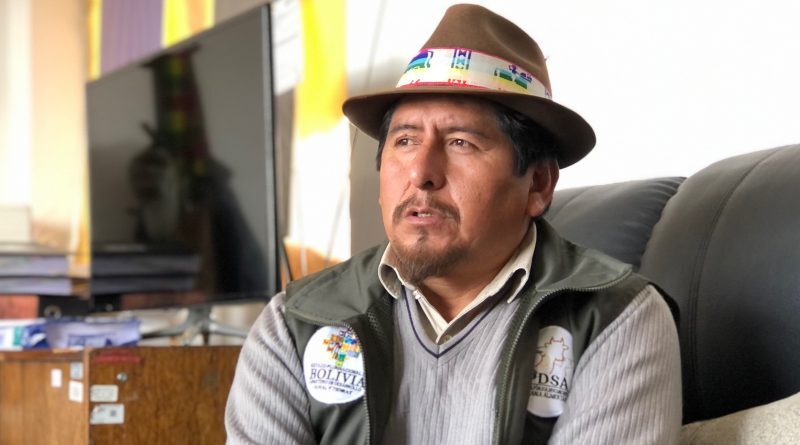 Food security and food sovereignty are perhaps the most important issues facing Latin America and its campesino farmers. Being able to produce what one consumes is key in reducing poverty and guarding against hunger and external economic shocks. Since 2006, Bolivia has made it a priority. Evo Morales came through the ranks of the campesino social movements and was keenly aware of the poverty and other challenges facing the rural areas. After huge investments in rural communities, Bolivia now produces 95% of what it consumes.

To understand this issue and how Bolivia is grappling with it, Kawsachun News spoke exclusively to Jhonny Marcos Huanca, Director of the Decentralized Public Institute for Food Sovereignty, a government agency dedicated to supporting Bolivia’s campesino farmers. Jhonny Marcos Huanca is an Indigenous agronomist from Caranavi, a rural area in the Yungas region of La Paz.

What is food sovereignty and what is the government doing to secure it?
Our institution exists to launch projects that benefit small and medium-sized agricultural producers, with the aim of guaranteeing food sovereignty and food security. When we talk about food security, what we mean is ensuring that there aren’t ever shortages of the products we consume in the country. When we talk about food sovereignty we mean is protecting mother earth, and supporting small producers to ensure they can guarantee food that is consumed at a departmental and national level.

At IPDSA, we’re working on four projects at the moment, the first is in chocolate and helping secure international markets for producers in Pando, Beni, Santa Cruz, Cochabamba, and La Paz. Another is with coffee, where we’re looking to boost production and ensure local farmers can benefit from the high price it receives currently, over US $160 per pound. We want to make the country, and the world, aware that this is no ordinary coffee, this is organic, selected, and well-produced. The third project is valley fruits, which are apples, apricots, chirimoya, and avocado, these are grown predominantly in Cochabamba but also in parts of Potosí, Chuquisaca, Tarija, and La Paz, we’re providing technical assistance to those producers. The fourth is boosting the production of Amazonian fruits, such as Brazil nuts, açai, copoazu, and majo, these are wild jungle fruits and are produced organically and collected by Indigenous communities of that region, so we’re here to assist that process as a government.

It’s not just our institution, other government agencies are cooperating in this, there’s SENASAG (National Service of Agricultural Health and Food Safety), there’s the INIAF (National Institute of Agricultural and Forest Innovation), and there’s the EMPODERAR state program. SENASAG is in charge of ensuring that plants and seeds are healthy and organic, INIAF is in charge of obtaining the highest quality of seeds and EMPODERAR provides technical assistance to small producers.

I want to add that this institution (IPDSA) used to have projects for Andean highlands too, focused on the production of tomatoes, green vegetables, and potatoes. However, after the coup, these projects were closed down, but now we’re working on reactivating them. None of these things would have been possible without the support of our President Evo Morales who started these projects. Now, with President Luis Arce, he says that we shouldn’t just be happy with four programes, we need more. We re-installed democracy in Bolivia thanks to the people and there’s nothing more important than giving back by ensuring support for small producers.

What’s the importance of reducing reliance on imports to fill the shelves of the cities?
What we’re working on is providing small producers with extra tools as well as technical assistance so that they can deliver what Bolivians consume. We face a lot of challenges, for example, in potato, Bolivia produces seven tons per hectare, whereas some of our neighbors are producing around 15 tons per hectare. We have lot to do still in maximizing the harvest. That is our job, ensuring that our producers can deliver what our internal market needs as well as ensuring that small producers can reap the benefits and raise their standard of living, that in turn re-activates wider economic growth.

What are some the products that we need more of? That is to say, what are Bolivians consuming that aren’t made nationally for now?
Well, contraband is a terrible blow, from Brazil, Paraguay, Peru and Chile, they’re undercutting our producers. SENASAG is in charge of controlling that and trying to limit the flow of those illegal products, we’ve asked for controls to be more rigid. The Peruvian potato comes in and hurts our farmers because it’s cheaper, same with the apples and apricots from Chile because they use GMO crops whereas we produce organically. We have to protect our farmers and support them so that they can provide the foodstuffs that the country needs, but we also need to go beyond and export as well meet the local demand. That is happening already, with chocolate and coffee, where we’ve begun to export. So we have to work to ensure that the products that Bolivian families consume are our own.

I also think that Bolivian products have a huge potential internationally because our produce is organic, that’s what other countries are looking to buy, and they’re willing to pay higher prices for it. That can then raise the living standards of our small producers. Raising living standards for our small producers means that our children can study and have opportunities, it means that we can live healthily and vivir bien (‘live well’), a crucial concept in our culture.

The fair distribution of land is also indispensable in securing food sovereignty.
Absolutely. The issue of agrarian reform started with the 1952 revolution, where the largest landowners were forced out and those who worked the land took control. However, that process wasn’t fully completed at the time. With the government of Evo Morales, we made it a reality and we went further. Evo changed the law so that women campesinas can now also hold land titles, something that didn’t exist before, now our sisters can have a land title in their name rather than just the men of the community.

Currently, we have about 85-87% of productive land distributed to small holder campesinos, only a small part is left and I think that by the end of this governmental term we can do it. We’re working on ensuring that every farmer has a national ID document, because without that they can’t have a land title in their name, they can’t access loans with which to invest in their production. So, we still have work to do to ensure the remain lands are distributed fairly to those who work it and need it. It’s not fair that there are still some businessmen with thousands of hectares while entire rural families have nothing, this is is the case primarily in Santa Cruz where we have to ensure that the lowland Indigenous peoples have the land that they work. It’s a historic injustice that goes back many years. With Evo Morales, we made a lot of progress on this, but now that we have democracy again after the coup, it’s time to complete that task, there aren’t any excuses anymore, President Luis Arce and Vice-president David Choquehuanca are committed to this.

Protecting the environment is also important. If we destroy the environment then we can’t produce what we need.
That is a key task for IDPSA, for securing food sovereignty. There’s an important project we’ve worked on in the east of the country called chaqueo sin quema(clearing without burning). To encourage crop rotation and clearing of lands in sustainable ways, crop rotation is the key to protecting Mother Earth. We cannot forget that Mother Earth is what gives us life, we depend on it and we can’t destroy it.