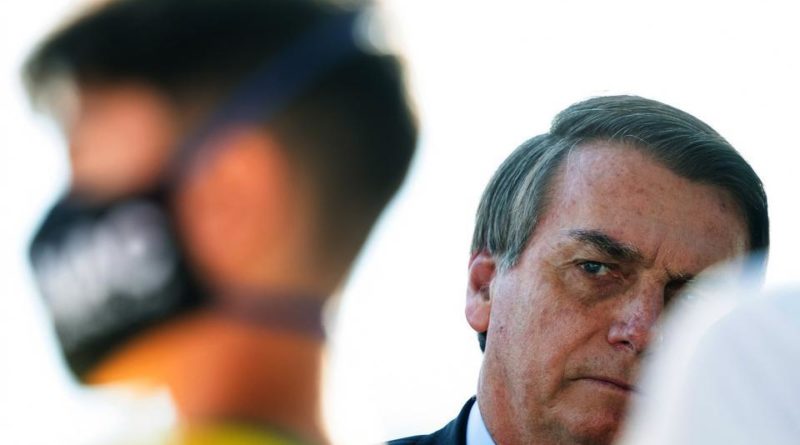 Repeating Trumps’ words, the President of Brazil, Jair Bolsonaro, labeled those who came out to protest against his government as “terrorists.”  Trump had used this term to refer to the hundreds of thousands of US citizens who mobilized in the streets all over the country to protest the death of George Floyd, a young Black man, at the hands of the police – four officers including Derek Chauvin.

Standing in front of the Palacio de Alvorada, Bolsonaro advised his supporters not to come out into the streets next Sunday, when massive “pro-democracy” mobilizations are expected in the main cities of Brazil. The ultra-right head of state also supported the political repression of the demonstrations and suggested that a former major ally, Rio de Janeiro Governor Wilson Witzel, might be arrested.

In this period, when Brazil has more than 600,000 cases of coronavirus infections and 34,000 dead, a general without any experience in healthcare was appointed the new Minister of Health, swelling the already massive lists of military officers in the Bolsonaro cabinet.

RELATED CONTENT: Reopening Scheme in Venezuela Modified from 5 + 10 to 7 + 7

“It has started here already, with Antifa ( anti-fascists) in the streets,” said Bolsonaro, speaking from the Palacio de Alvorada about the mobilizations against his government.  “The political motive is different from those protesting in the United States, in my opinion.  They are lower-class marginal elements, they are terrorists,” added the ultra-right president, in his regular meeting with the media.  In that regard, Bolsonaro assured the media that he would not permit that “Brazil would become like Chile was a short time ago,”  in reference to the wave of protests that began last October against the government of Sebastián Piñera and the structural inequalities of its design of society.  “This is not democracy or freedom of expression. This, in my opinion, is terrorism,” he insisted.

Bolsonaro also asked his followers not to be out in the streets this Sunday, contrary to what not only his supporters but even the President himself have been accustomed to doing all during the coronavirus pandemic, without observing social distancing measures.  Gatherings of anti-fascist groups against his government are planned for this coming Sunday all over Brazil.  “I have already advised that people do not come out this Sunday, although I have no influence because I am not in charge of any group. I never summoned anyone to come out into the streets,” he said, indicating that this was a precaution so that “the police can do their work well, whatever happens,” in case there are disturbances.

In recent days there have been massive protests against his rule and on social media more are planned in various cities. The marches are inspired by the “pro-democracy” demonstration that took place last Sunday on the Avenida Paulista.  There the mobilization ended badly when the demonstrators called together by the various supporters of the Paulista football team clashed with supporters of Bolsonaro who were protesting against the quarantine measure. At one point, the police used tear gas to disperse them. A new protest in Curitiba also ended Monday with aggressive police intervention.

The marches planned for next Sunday in cities like Rio de Janeiro, Brasilia, Salvador, and Goiania include the fight against racism, echoing the demonstrations that exploded in the U.S. and extended to other countries after the racist crime against George Floyd.  “It is not possible to fight for democracy without fighting against racism, fascism, and oppression,” is the slogan used to publicize the demonstrations in social media.

In his brief meeting with his followers and the media, Bolsonaro also referred to the recent police investigation regarding the supposed diversion of funds meant for the battle against coronavirus by the government of Rio de Janeiro.  A military policeman from Rio who was present in the vicinity of the Palacio de Alvorada complained to the head of state about government measures he judged to have had a negative impact.  “I am not going to speak with Wilson Witzel,” Bolsonaro said, referring to the governor of Rio. “You know where he ought to be, right?” he said in a challenging manner.  These words of Bolsonaro were interpreted as a threat to arrest Witzel, whose official residence, the Palacio de Laranjeira, was broken into last week in the setting of so-called “Operation Placebo.”  Witzel is one of the governors with whom Bolsonaro has kept up an ongoing conflict with during the process of the health crisis.  The president consistently refused to adopt “drastic measures” like stay-at-home orders in contrast to decisions taken by the governments of densely populated states like Rio de Janeiro and San Pablo.

As Brazil continues to be the country with the second-highest level of coronavirus problems in the world, and the greatest number of cases in Latin America, Bolsonaro proceeded to formally name General Eduardo Pazuello as the new Minister of Health, after the resignation of the two previous Health Ministers, in the midst of the pandemic.  Pazuello became acting minister on May 15, although the President said he expected that the general would remain in the post “for a long time.”

The designation of Pazuello as Minister of Health was published this Wednesday in the Diario Oficial de la Unión, setting the stage for more military influence in the cabinet, where officers of the armed forces now occupy 40 positions.  The general takes the place of Nelson Teich, who resigned on May 15 due to “disagreements” with Bolsonaro about the use of chloroquine as a treatment for coronavirus. Teich, in his turn, had taken office after the resignation of Luiz Henrique Mandetta only one month before, also for differences of opinion with the president about the management of the pandemic.