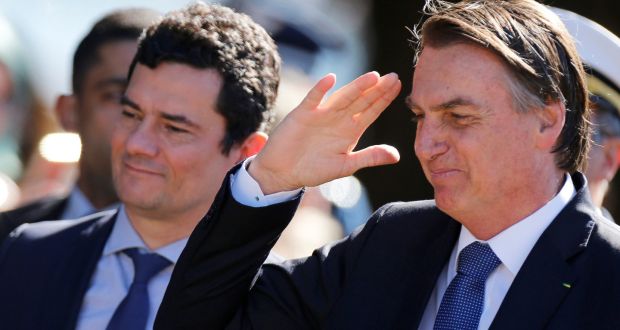 The reckless attack on the Amazon Basin, one of the most critical regions for the world’s climate, has been fueled by Bolsonaro’s fanning the flames of racism against the indigenous caretakers of the Amazon. Word is now filtering out that last week illegal gold miners flooding into the region were responsible for the murder of indigenous Chief Emyra Wajapi – Edit

Since the first day of the year of darkness in Brazil, when extreme right-winger Jair Bolsonaro took office as President, the country has been facing drastic setbacks day after day. The destructive turmoil boosted from the presidential seat seems to have no limits.

Due to the fact that he was unable to achieve changes in the environmental protection laws through Congress, Bolsonaro did not hesitate to start easing controls and enforcement. The result has been the dramatic devastation of the Amazon region starting in June. Since his arrival in the presidency he has given the okay to use 262 new pesticides into the Amazon ecosystem that will have a dramatic impact on the entire hemisphere. Furthermore, regulations to classify the risk of these highly toxic chemicals were minimized to facilitate its introduction.

And the wave of setbacks goes on: education, particularly national universities are enduring major funding cuts. One result has been that many of the schools are running the risk of not being able to pay for basic services such as electricity, water and maintenance.

Education Minister Abraham Weintraub, who himself is educationally challenged when speaking and writing, says the solution is to find resources in the privatizing of the schools.

RELATED CONTENT: Bolsonaro: Greenwald “May be Imprisoned”, Journalist Says ‘”No”

The situation is also tense in the cultural field since the funding to public companies is disappearing. Under Bolsonaro, Petrobras oil company, previously Brazil’s major sponsor of the arts, cut its cultural funding program. The President meanwhile says he expects to have production of the film industry under close control, “out of respect for families and their values.”

Petrobras, a nationalized entity itself sold the majority stake of BR-Distribuidora,the largest distributor and marketer of petroleum derivatives and biofuels (ethanol) of Brazil, and announced other subsidiaries will follow the same path. More privatizations will be prepared for the energy, banking, post office, or whatever sectors.

In this new scenario, Brazil’s foreign policy is not exempt for being up for sale. This is nothing but a huge setback to the sovereignty of Brazil and its most dramatic expression can be seen with Bolsonaro’s complete alignment with the Trump administration and bowing down to whatever he says and wants. To facilitate this allegiance Bolsonaro has officially appointed his son Eduardo, a federal deputy, as Ambassador to Washington.

Announcing this decision, he explained that Eduardo has travelled a lot, he speaks English, and he has very good (and unknown) relations with the Trump family. While his English is not as good as he thinks he did live in the United States for six months where he flipped hamburgers for a living

The appointment of the president’s son will have to be passed by the Senate. There is not any precedent of a similar initiative on Brazil’s history.

Foreign Affairs Minister Ernesto Araujo said he fully supports the idea. This is the same minister who, fully supported by Bolsonaro and Eduardo, has been dismantling a strong independent diplomacy that was built throughout a century and which has not been so beaten down not even during the 21 years of military dictatorship (1964-1985).

Araujo eagerly defends the same perspective as the far right President does; a definitive breaking with anything he perceives as leftist and his claim of recovery of “Christian and Western” values is the only option in the direction of his administration.

In an irremediable contradictory initiative, under his command, Brazil has moved away from western democracies to join countries like Saudi Arabia, Pakistan, Bangladesh, Egypt, and Afghanistan in U.N. votes on women.

The Minister reiterates that Brazil’s new stance in international forums must have a clear orientation and he gives as an example of taking a position against initiatives that lead to “sexualizing childhood.” He did not explain which U.N. initiatives he was talking about.

Radical enemies of what he calls “globalism,” the Foreign Minister is putting up total resistance to the most advanced stances in Brazil’s foreign policy over the last decades. He is showing an obsession for certain issues and fostering radical changes. Brazil was, until now, in the vanguard worldwide due to its adhesion to agreements and treaties in defense of minorities. It was, for instance, the first country in the world to propose in 2003 a U.N. resolution on human rights and sexual orientation. A threat according to Bolsonaro and his minister, to family traditions.

Against the best Brazilian tradition, Araujo abstained from the U.N. vote that determined an investigation should take place on the war on drugs policy carried out in the Philippines which has resulted in the killing of over 27 thousand drug trafficking suspects in three years.

Another obsession of Brazil’s new foreign policy is to fight hard not just global warming but even against those who warn about its existence. According to Araujo, climate changes are part of a “Marxist plot” to control the world. And he supports his unhinged thesis with a personal example. He was in Italy in May during spring and the previous month it had been the coldest April in 70 years substantially proving in his mind that Global Warming doesn’t exist.

This would be funny if it was not so tragically serious.