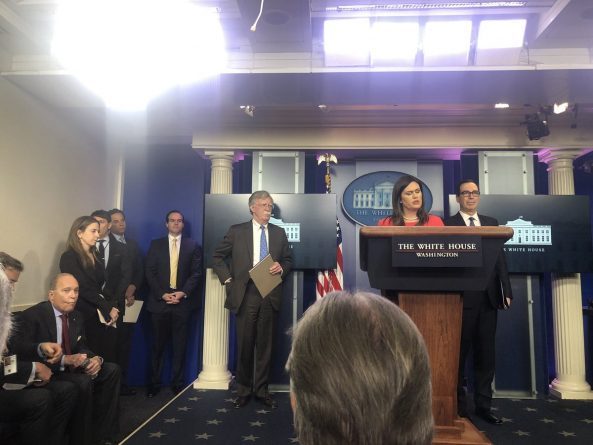 It is important to highlight that most of the oil used in CITGO refineries is the Venezuelan extra-heavy oil and the immediate response of Venezuela will be the stop of sales to the US and the seizure of US assets in Venezuela, according to what Venezuelan analyst have made public.

In a press conference held a few minutes ago in the White House, Washington has imposed sanctions against the Venezuelan state oil company PDVSA, seizing $7 billion in assets, Treasury Secretary Steven Mnuchin said. The US is trying to force recognition of Juan Guaido as president in Caracas. Munchin said that the move is “to help prevent the further diversion” of assets by “former president Maduro.”

Sanctions will be lifted upon the “expeditious transfer of control to the interim president, or the subsequently democratically elected interim government,” he added.

“We know what the legitimate government of Venezuela is, and it is our mission to make reality what the people of Venezuela want,” National Security Adviser John Bolton chimed in, standing next to Mnuchin during the briefing at the White House on Monday.

Washington immediately recognized Guaido as the head of the state after he declared himself interim president last week. US allies in the region and in Europe supported him as well.

The US buys a significant amount of Venezuelan oil, but Mnuchin said the sanctions would have “modest effect” on American refineries.

Citgo will continue operating in the US, but all profits from its sales will have to go into a blocked account, which will only be made available to Guaido’s government, the Treasury secretary explained.

“These are valuable assets we’re protecting for the benefit of the Venezuelan people,” Mnuchin argued.

Asked what the US options were if the Venezuelan military remains loyal to Maduro, Bolton said that a number of high-ranking officers, as well as rank and file, are in “significant contacts” with the US-backed regime of Juan Guaido.