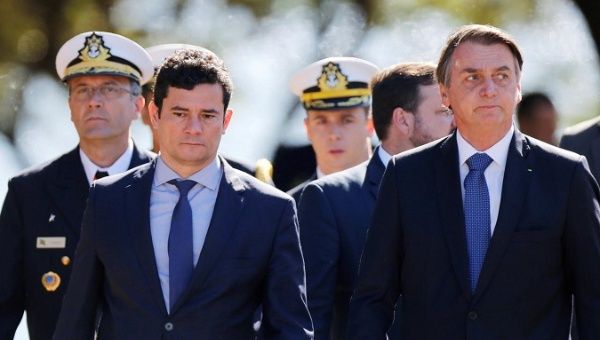 Flavio Bolsonaro’s deep links to organized crime were not prosecuted by Sergio Moro in order not to “upset Bolsonaro” and protect his chances at securing a seat at the Supreme Court.

New leaked chats between Brazil’s anti-corruption prosecutor Deltan Dallagnol and other federal servants show that the Justice Minister Sergio Moro protected Senator Flavio Bolsonaro, son of far-right President Jair Bolsonaro from corruption scandals when he was an elected official, according to a report published Sunday by The Intercept.

In its sixth part of “Secret Brazil Archive” which started in June, journalists Glenn Greenwald and Victor Pougy wrote that Flavio Bolsonaro’s scandal was not just about misusing public funds but “something much darker: deep links between the Bolsonaro family and the organized crime rings that rule and terrorize much of Brazil (and which Sergio Moro was purportedly appointed to combat).”

After Bolsonaro’s victory in presidential elections, the federal prosecutors were elated that while local investigators were probing into the financial scandal, more serious charges will not be investigated because Moro was afraid of angering Bolsonaro who himself was afraid of being implicated.

Flavio’s long-time driver Fabricio Queiroz used to transfer unusually large amounts of money to his employer’s account and in one occasion to the account of the president’s wife Michelle. Queiroz is also connected with Brazil’s most violent paramilitary gang. Flavio himself appointed the mother and wife of Rio de Janeiro’s most wanted paramilitary leader during his tenure as a state representative.

The nature of the scandal is so deep that even Moro’s long-time ally Deltan Dallagnol, the chief prosecutor of Operation Car wash which implicated former President Luiz Inacio Lula da Silva in a politically motivated corruption scandal, expressed concerns when Moro refused to investigate Flavio.

Moro wanted to secure his appointment as a Supreme court judge after being the Justice Minister which led him to hide Flavio’s transgressions.

On Dec. 8, 2018, five weeks after Bolsonaro’s victory, Dallagnol started a discussion in their Telegram chat group regarding his concern about Moro and an article by a local media outlet which described unexplained deposit by Flavio’s driver into the account of Michelle Bolsonaro, the president’s wife.

Dallagnol wrote on the chat, “In any case, the president will not split from his son. And what if all this happens before the vacancy on the Supreme Court appears? Now, how much will he support the Moro Anti-Corruption agenda if his son ends up feeling Moro’s investigation on his skin?”

The same day, in a private chat with another prosecutor Roberson Pozzobon, Dallagnol said he wanted to avoid media interviews or condemning Flavio publicly in fear of political consequences as that would displease Bolsonaro.

Pozzobon agreed, saying, “I believe silence, in this case, is more eloquent.”

However, in January this year, Dallagnol gave a public statement denouncing Flavio which was praised by his press aide in a private chat saying, “this reinforces our non-partisanship.”

The press aide also criticized Moro for not taking a strong stand regarding Flavio’s connection with Queiroz. He wrote, “They say his comments on Queiroz were very ‘neutral,’ that they had no firmness, you know? To many people, it seems Moro wanted to escape to the margins.”

This follows the pattern of Moro’s closest allies criticizing him for his conduct on cases related to Bolosnaro and his family. Moro had always maintained that he had no control over the Federal Police which is supposed to investigate the corruption scandals. He also said the failure of Federal police has nothing to do with him even though they report to the Justice Minister.