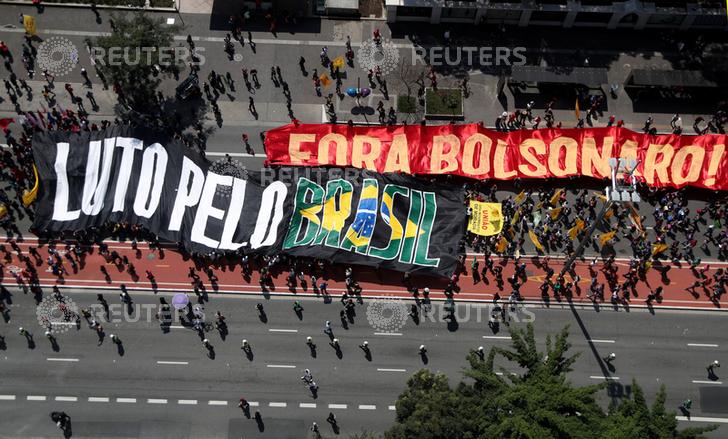 Adorned with cloths and black paintings on their faces, Brazilian students took to the streets in all regions of the country to protest the cuts to funds for education, and in defense of the Amazon, reported Prensa Latina.

The information provided indicates that the National Union of Students (UNE), summoned its members to be adorned in such a way and thus express indignation and mourning. At least 25 Brazilian [state] capitals confirmed their adherence to the mobilization.

Professor and sociologist Jésse Souza, in this regard, said: “Dress in black because our country is being sacked. They are stealing our future and present.”

According to the UNE, President Jair Bolsonaro asked the villagers to cover themselves in green and yellow on September 7 to demonstrate that “the Amazon is ours” and in response, the students, inspired by the Cara Pintada generation of the decade of 1990 that overthrew the ruler Fernando Collor de Mello, they will clothe themselves in black on that day.

The Union, on its digital page, indicates that in the midst of another crisis in the sector, the Ministry of Education announced that by 2020 the Coordination for the Improvement of Higher Education Personnel (Capes) will only have half of the 2019 budget.

They also commented that “it would be the third announcement of Capes’ cuts and this year alone the agency will no longer offer 11 thousand research grants. “A similar situation happens with the National Council for Scientific and Technological Development that has suspended the granting of new studies. Both organizations are the main promoters of research in higher education.

Flávia Calé, president of the National Association of Graduates, was of the opinion that “the above may mean a collapse even of the graduate school because 90 percent of the scientific production of Brazil is in universities. That’s why we are also calling everyone to mourn education and science.”

During the day, students will also incorporate in their protests the flag of the environment and the defense of the Amazon, the focus of a crisis and tensions over burning forests.

It is noteworthy that, for the UNE, although fires can be common in times of drought, relaxation in environmental controls in the Bolsonaro government has accelerated the loss of vegetation in the largest rainforest in the world.

It should be noted that, since his election campaign, the former military man made clear his lack of interest in issues related to the environment and conservation.

Finally, it was known that environmental organizations denounce, due to the irresponsibility of the extreme right-wing politician, the environmental crisis Brazil faces, of international dimensions, due to fires in the Amazonian territories, which hold almost 20 percent of the planet’s freshwater reserves and is the refuge of some 30 thousand plant and animal species.

Featured image: People attend the Grito dos Excluidos (Cry of the Excluded) as part of a demonstration against the President Jair Bolsonaro government, during the Brazilian Independence Day in Sao Paulo, Brazil September 7, 2019. The banners reads ‘Mourning for Brazil, Bolsonaro out!’ REUTERS/Rahel Patrasso