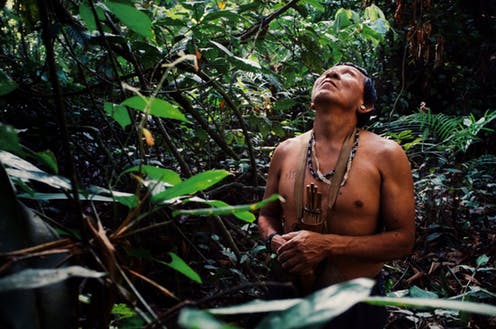 Brazil’s President Jair Bolsonaro made new statements on Friday against the demarcation of indigenous lands in the Amazon saying he intends to review the areas previously assigned to ancestral communities.

“It is too much land for so few Indians, and without lobbying. What are the interests behind this?” he said in what seems to repeat his traditional accusation against human rights defenders and environmental activists.

“My decision is not to demarcate more land for the Indians,” he answered when asked if he would reject almost 500 requests for new demarcations.

With respect to territories previously assigned to indigenous peoples and communities, the far-right President hinted that he would review their extension if he finds evidence that those lands “were irregularly demarcated.”

As human rights defenders have repeatedly denounced, Bolsonaro’s hate speech have been encouraging invasions of indigenous territories by land traders, miners, loggers, cattle ranchers, soybean growers and other entrepreneurs who feel free to act and protected by his attitudes.

Regarding this type of abuses and crimes, the Prosecutor’s Office at the state of Para requested this week help from the Brazilian Federal Police to prevent violent events led by illegal miners against the Xikrin, an indigenous people which lives at the northern Amazon.

“As in the kindergarden books, you just have to connect the dots to find out Bolsonaro insufflating his agribusiness constituents against Indians, prosecutors and environmentalists.” The meme reads, “Attorney General of the Republic, Raquel Dodge, suspects a coordinated action at the Amazon fires.”

The racial tones of Bolsonaro’s discourse, however, have not only been detected by local analysts. The New York Times published a compilation of his most controversial phrases since the time when he was a federal lawmaker, who was supported by big agricultural companies.

“The Brazilian cavalry was very incompetent. Competent was, indeed, the U.S. Cavalry which exterminated their Indians in the past and, today, they do not have that problem in their country,” Bolsonaro said, as recalled by local mainstream media O Globo.

Nevertheless, before becoming president, Bolsonaro did give indications on how his government would behave with respect to the Amazon forests and indigenous peoples.

“In 2019 we’re going to rip up Raposa Serra do Sol [an Indigenous Territory in Roraima]. We’re going to give all the ranchers guns,” the former lawmaker said on 2016.