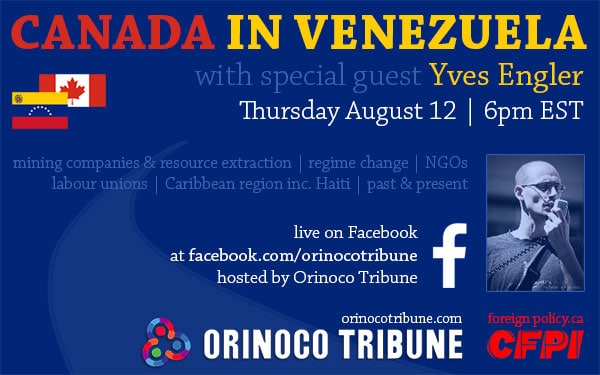 NOTE: This interview is now complete and can be viewed on Youtube here.

August 3, 2021 (special for Orinoco Tribune)—Orinoco Tribune will host Canadian writer Yves Engler for a discussion of Canada’s foreign policy regarding Venezuela and the economic interests of Canadian corporations in the region on Thursday, August 12. While the US has taken the lead in “regime”-change operations against Presidents Hugo Chávez and Nicolás Maduro, Canada has played a disproportionately significant role that has been less widely publicized—at times Canada is even presented as a benevolent actor in the region. We will learn that Canada’s complicity extends far beyond its general support for US foreign policy. The interview will be conducted on Thursday, August 12, at 6 p.m. EST, broadcast live on Facebook, and hosted by Orinoco Tribune contributor Steve Lalla:

Canada has played a nefarious role in Venezuela since Chávez’s electoral victory in 1998—funding NGOs to reverse democratic processes in Venezuela, acting as torchbearer for the Lima Group created in 2017, and recognizing the imposter Juan Guaidó in 2019. We will examine the influence that Canadian resource-extraction industries, particularly mining companies, may exert in the ongoing hybrid war against the Bolivarian Revolution. Crystallex, Gold Reserves Corp., Rusoro, PetroCanada, or Barrick Gold—the largest gold mining company in the world—are just a few of the Canadian multinationals that have been involved in lengthy and sizable disputes with Venezuela’s government since Chávez’s program began increased channeling of resource extraction profits into social programs.

In addition to these topics, we will look at the part played by Canadian NGOs and labour unions in destabilizing Venezuela, and Canada’s presence in neighboring countries such as Haiti—where Jovenel Moïse was assassinated last month—and Guyana.

Montréal-based author, journalist, and activist Yves Engler has published 11 books including the most recent House of Mirrors—Justin Trudeau’s Foreign Policy. One of Canada’s foremost foreign policy critics, Yves was born in Vancouver to left-wing parents who were union activists and involved in international solidarity, feminist, anti-racist, peace, and other progressive movements.

Engler is a co-founder of the Canadian Foreign Policy Institute. As a journalist his work appears regularly with Canadian Dimension, Ricochet, Mondoweiss, Counterpunch, and Orinoco Tribune, among others. He has written numerous articles about Venezuela, available on his website yvesengler.com.

The discussion will be broadcast live on Facebook through Orinoco Tribune’s Facebook page on Thursday, August 12 at 6 p.m. EST/Caracas time. One is not required to be a member of Facebook to view the live interview. Please visit the Facebook event page here to confirm your attendance.

NOTE: This interview is now complete and can be viewed on Youtube here.