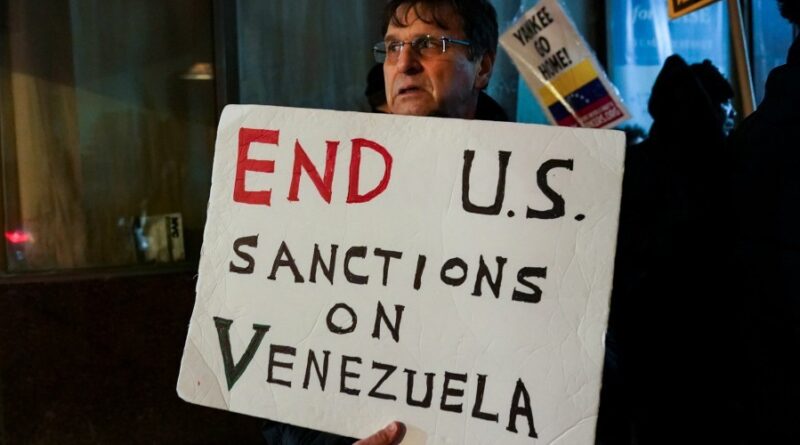 Ottawa has not criticized the devastating US sanctions. Quite the opposite. It has egged the bully on.

This is what empowering a bully looks like. The Canadian government is supporting Donald Trump’s efforts to starve Venezuelans.

Before dismissing what may sound like over-the-top rhetoric, hear me out.

The US government has imposed a remarkable series of unilateral coercive economic measures on Venezuela – or as Trump boasted last week, “historic sanctions”. In a bid to oust the Venezuelan government, Washington has seized billions of dollars in Venezuelan assets effectively driving the country out of International financial markets. This has thwarted Venezuela’s ability to buy goods, including food, from abroad.

Sanctions imposed 18 months ago targeting Venezuela’s oil industry have choked its ability to refine its gigantic oil reserves. More recently, the US launched a successful campaign to deter oil and gas shipping companies from working with Venezuela. Their strategy has been to pressure companies that insure and certify vessels to stop international shipping firms from delivering oil and gasoline to and from Venezuela.

Before the strongest measures were introduced, a study by economists Jeffrey Sachs and Mark Weisbrot found US sanctions responsible for 40,000 deaths between August 2017 and the end of 2018.

Describing this aggressive strategy, Trump’s special envoy on Venezuela, Elliott Abrams, told Reuters, “there are people who don’t cooperate…We’ll go after the ship, the ship owner, the ship captain.”

While less gasoline consumption is certainly desirable when it comes to the private automobile, oil does have other important uses. It’s needed for tractors on farms. It’s required to ship food into urban centres. A Bloomberg story last month titled “Venezuela on Brink of Famine With Fuel Too Scarce to Sow Crops” reported, “oil fields across Venezuela have shut amid the U.S.’s relentless campaign to cut the nation off from global markets. Evidence of fuel scarcity is everywhere. Ambulances can’t run, telecommunications networks are faltering and some farmers have given up altogether on machinery — using oxen instead.”

The damage caused by US sanctions to Venezuela’s economy and health are immense. Before the strongest measures were introduced, a study by economists Jeffrey Sachs and Mark Weisbrot found US sanctions responsible for 40,000 deaths between August 2017 and the end of 2018.

Yet Ottawa has not criticized the devastating US sanctions. Quite the opposite. It has egged the bully on. Canada has imposed four rounds of its own unilateral sanctions on Venezuela. Canada has also offered important support to US efforts to oust Nicolás Maduro through its role in establishing the Lima Group of countries opposed to Venezuela’s government in August 2017. At that time the government contracted staunch pro-Washington and pro-corporate former diplomat,Allan Culham, to act as a Special Advisor on Venezuela. A year later Ottawa decided a marginal opposition politician was the legitimate president of Venezuela. Even after Juan Guaido was embroiled in a failed paramilitary incursion in May — dubbed the “Bay of Piglets” by a former US diplomat — and a series of corruption scandals, Ottawa has continued supporting him as “president”. Foreign affairs minister Francois-Philippe Champagne directed his July 5 Venezuela Independence Day commemoration to Guaido and three days later tweeted, “Canada stands in support of Juan Guaido.”

Canadian officials claim to be promoting democracy and human rights in Venezuela, but they’ve partnered in their campaign with a Honduran president, Juan Orlando Hernández, with far weaker constitutional legitimacy than Maduro. Other members of the Lima Group include Haitian president Jovenel Moïse, who has faced unprecedented protests over corruption and repression, and Colombian president Ivan Duque, who oversees much greater human rights violations.

Questioning our policy towards Venezuela is part of an open letter calling for a “fundamental reassessment of Canadian foreign policy” released following Canada’s recent United Nations Security Council defeat. Signed by David Suzuki, Naomi Klein, Stephen Lewis as well as four sitting MPs and numerous former MPs, one of its 10 questions asks: “Why is Canada involved in efforts to overthrow Venezuela’s UN-recognized government, a clear violation of the principle of non-intervention in other country’s internal affairs?”

Canadians should debate this question. We must ask ourselves whether we will continue to accept our government’s participation in a Trump administration regime change effort that effectively undermines the ability of ordinary Venezuelans to feed themselves.

Bianca Mugyenyi is an author and former co-executive director of The Leap. She currently coordinates the Canadian Foreign Policy Institute. She is the co-author with Yves Engler of Stop Signs: Cars and Capitalism on the Road to Economic, Social and Environmental Decay.

Featured image: We must ask ourselves whether we will continue to accept our government’s participation in a Trump administration regime change effort that effectively undermines the ability of ordinary Venezuelans to feed themselves. (Photo: Drew Angerer/Getty Images)