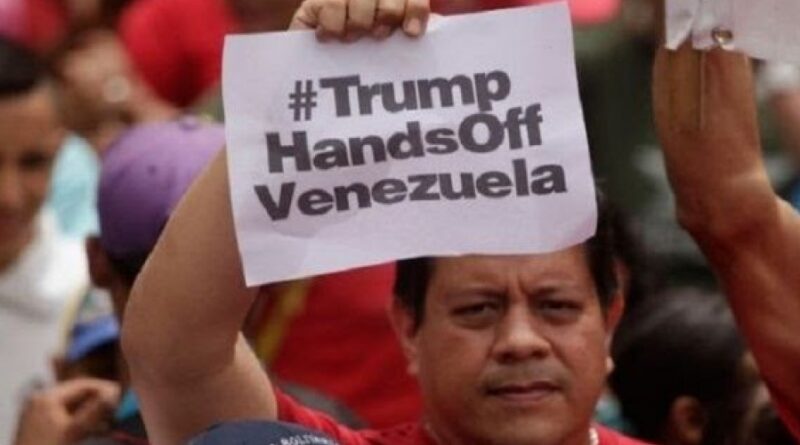 Instead of continuing down this imperial path of endless confrontation, U.S. policymakers need to stop, recalibrate, and design an entirely new approach to inter-American relations.

U.S. policy towards Venezuela has been a fiasco. Try as it might, the Trump regime-change team has been unable to depose President Maduro and finds itself stuck with a self-proclaimed president, Juan Guaidó, who President Trump was reported to have called “a kid” who “doesn’t have what it takes.” The Venezuelan people have paid a heavy price for Trump’s debacle, which has included crippling economic sanctions and coup attempts. So has U.S. prestige internationally, as both the UN and the EU have urged lifting sanctions during the pandemic but the U.S. has refused.

This is only one example of a string of disastrous policies toward Latin America. The Trump administration has dusted off the 19th century Monroe Doctrine that subjugates the nations of the region to U.S. interests. But as in past centuries, U.S. attempts at domination are confronted at every turn by popular resistance.

Instead of continuing down this imperial path of endless confrontation, U.S. policymakers need to stop, recalibrate, and design an entirely new approach to inter-American relations. This is particularly urgent as the continent is in the throes of a coronavirus crisis and an economic recession that is compounded by low commodity prices, a belly-up tourist industry and the drying up of remittances from outside.

A good reference point for a policy makeover is Franklin Delano Roosevelt’s “Good Neighbor Policy” in the 1930s, which represented an abrupt break with the interventionism of that time. FDR abandoned “gunboat diplomacy” in which Marines were sent throughout the region to impose U.S. will. Though his policies were criticized for not going far enough, he did bring back U.S. Marines from Nicaragua, Haiti and the Dominican Republic, and scrapped the Platt Amendment that allowed the U.S. to intervene unilaterally in Cuban affairs.

So what would a Good Neighbor Policy for the 21st Century look like? Here are some key planks:

An end to military intervention. The illegal use of military force has been a hallmark of U.S. policy in the region, as we see from the deployment of Marines in the Dominican Republic in 1965, Grenada in 1983, Panama in 1989; involvement in military actions leading to the Guatemalan coup in 1954 and destabilization in Nicaragua in the 1980s; support for coups in Brazil in 1964, Chile in 1973 and elsewhere. A Good Neighbor Policy would not only renounce the use of military force, but even the threat of such force (as in “all options are on the table”), particularly because such threats are illegal under international law.

U.S. military intimidation also comes in the form of U.S. bases that dot the continent from Cuba to Colombia to further south. These installations are often resisted by local communities, as was the case of the Manta Base in Ecuador that was shut down in 2008 and the ongoing opposition against the Guantanamo Base in Cuba. U.S. bases in Latin America are a violation of local sovereignty and should be closed, with the lands cleaned up and returned to their rightful owners.

Another form of military intervention is the financing and training of local military and police forces. Most of the U.S. assistance sent to Latin America, particularly Central America, goes towards funding security forces, resulting in the militarization of police and borders, and leading to greater police brutality, extrajudicial killings and repression of migrants.The training school in Ft. Benning, Georgia, formerly called the “School of the Americas,” graduated some of the continent’s worst human rights abusers. Even today, U.S.-trained forces are involved in egregious abuses, including the assassination of activists like Berta Cáceres in Honduras. U.S. programs to confront drugs, fromthe Merida Initiative in Mexico to Plan Colombia, have not stopped the flow of drugs but have poured massive amounts of weapons into the region and led to more killings, torture and gang violence. Latin American governments need to clean up their own national police forces and link them to communities, a more effective way to combat drug trafficking than the militarization that Washington has promoted. The greatest contribution the U.S. can make to putting an end to the narcotics scourge in Latin America is to take measures to control the U.S. market for those drugs through responsible regulation and reforms,

No more political meddling. While the U.S. public has been shocked by charges of Russian interference in its elections, this kind of meddling is par for the course in Latin America. USAID and the National Endowment for Democracy (NED), created in 1983 as a neutral sounding alternative to the CIA, spend millions of tax-payer dollars to undermine progressive movements. Following the election of Hugo Chávez in 1998, for instance, NED ramped up its assistance to conservative groups in Venezuela (which became the foundation’s number one Latin American recipient) as a leadup to regime change attempts.

Universal threats, such as coronavirus and the climate crisis, have taught us the limits of borders and should act as incentives to construct a Good Neighbor Policy for the 21st Century based on those principles of non-intervention and mutual respect.

Unfortunately, the State Department’s definition of democracy includes free market capitalism, which gets translated into special relations with conservative governments that prioritize the interests of the elite and U.S. corporations. Under Trump, this has meant that Washington’s closest allies are governments on the extreme right of the political spectrum that have been accused of flagrant violations of human rights: Jair Bolsonaro in Brazil, Ivan Duque in Colombia, Jeanine Añez in Bolivia, Sebastián Piñera in Chile and Nayib Bukele in El Salvador. A New Good Neighbor Policy would follow the example of the United Nations in not letting ideology determine relations with other nations.

An end to the use of economic blackmail. The U.S. government uses economic pressure to impose its will. The Trump administration threatened to halt remittances to Mexico to extract concessions from the government of Andrés Manuel López Obrador on immigration issues. A similar threat persuaded many voters in El Salvador’s 2004 presidential elections to refrain from voting for the candidate of the left-leaning Farabundo Martí National Liberation Front (FMLN).

The U.S. also uses economic coercion against the socialist governments of Cuba, Venezuela and Nicaragua. For the past 60 years, U.S. administrations have sanctioned Cuba—a policy that has not successfully led to regime change but has made living conditions harder for the Cuban people. The same is true in Venezuela, where one study says that in just 2017-2018, over 40,000 Venezuelans died as a result of sanctions. With coronavirus, these sanctions have become even more deadly. A Good Neighbor Policy would lift the economic sanctions against all three nations and help them recover economically.

Support trade policies that lift people out of poverty and protect the environment. U.S. free trade agreements with Latin America have been good for the elites and U.S. corporations, but have increased economic inequality, eroded labor rights, destroyed the livelihoods of small farmers, furthered the privatization of public services, and compromised national sovereignty. When indebted nations seek loans from international financial institutions, the loans have been conditioned on the imposition of neoliberal policies that exacerbate all of these trends.

In terms of the environment, too often the U.S. government has sided with global oil and mining interests when local communities in Latin America and the Caribbean have challenged resource-extracting projects that threaten their environment and endanger public health. We must launch a new era of energy and natural resource cooperation that prioritizes renewable sources of energy, green jobs, and good environmental stewardship.

With the economic crisis brought on by coronavirus, the protests that rocked Latin America before the pandemic will return with a vengeance unless countries are free to explore alternatives to neoliberal policies.A New Good Neighbor Policy would cease imposing economic conditions on Latin American governments and would call on the International Monetary Fund to do the same. An example of international cooperation is China’s “Belt and Road Initiative,” which, even with some downsides, has generated goodwill in the Global South by prioritizing investments in much-needed infrastructure projects without conditioning its funding on any aspect of government policy.

Humane immigration policy. Throughout history, U.S. administrations have refused to take responsibility for the ways the U.S. has spurred mass migration north, including unfair trade agreements, support for dictators, climate change, drug consumption and the export of gangs. Instead, immigrants have been used and abused as a source of cheap labor, and vilified according to the political winds. President Obama was the deporter-in-chief; President Trump has been caging children, building walls, and shutting off avenues for people to seek asylum. A Good Neighbor policy would dismantle ICE and the cruel deportation centers; it would provide the 11 million undocumented immigrants in the United States a path to citizenship; and it would respect the international right of people to seek asylum.

Recognition of Latin America’s cultural contributions. President Trump’s blatant disrespect towards Latin Americans and immigrants, including his call for building a wall “paid for by Mexico,” has intensified racist attitudes among his base. A new Latin America policy would not only counter racism but would uplift the region’s exceptional cultural richness. The recent controversy surrounding the extensive commercial promotion of the novel “American Dirt,” written by a U.S. author about the Mexican immigration experience, is an example of the underestimation of talent south of the border. The contributions of the continent’s indigenous population should also be appreciated and justly compensated, such as the centuries-old medicinal cures that are often exploited by U.S.-based pharmaceutical companies.

According to the Pew Research Center, in the two years prior to Trump’s assumption of the presidency, the percentage of Latin Americans who viewed the United States favorably dropped from 66% to 47%. These percentages continued their precipitous decline under the Trump presidency. A few economic concessions are not going to turn the trend around.

With the possibility of a change in the White House, CODEPINK, the Center for Economic and Policy Research (CEPR), and other progressive organizations are drafting a letter to presidential candidate Joe Biden that begins: “We hope that your administration will adopt a New Good Neighbor Policy” based on the “principles of non-intervention and non-interference, mutual respect and acceptance of our differences.”

An all-encompassing expression of goodwill in the form of a New Good Neighbor Policy will meet resistance from vested economic and military interests, as well as those persuaded by racist arguments. But the vast majority of people in the United States have nothing to lose by it and, in fact, have much to gain. Universal threats, such as coronavirus and the climate crisis, have taught us the limits of borders and should act as incentives to construct a Good Neighbor Policy for the 21st Century based on those principles of non-intervention and mutual respect.

Featured image: An all-encompassing expression of goodwill in the form of a New Good Neighbor Policy will meet resistance from vested economic and military interests, as well as those persuaded by racist arguments.(Photo: CC)