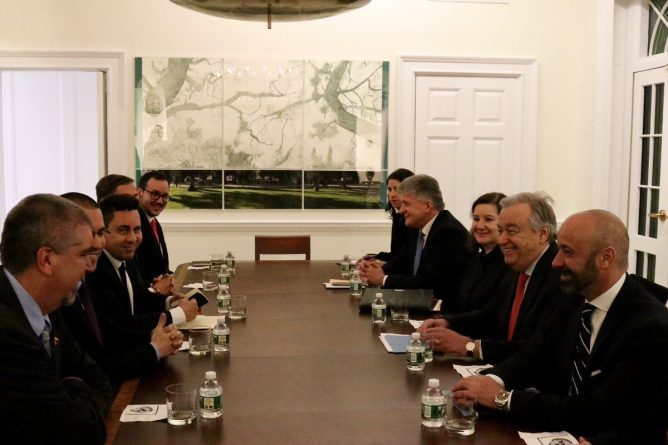 The Minister for Foreign Affairs of Venezuela, Jorge Arreaza, held a meeting on Monday with the Secretary General of the United Nations (UN), Antonio Guterres, to strengthen ties of cooperation. The information was made public by the Venezuelan Foreign Ministry, the meeting aims to “deepen cooperation relations in favor of the welfare of all Venezuelans.”

“The intention is to strengthen cooperation programs in health, food, education; for the needs of the Venezuelan people, “the foreign minister wrote in his twitter account, while emphasizing that it is necessary for multilateralism to overcome any impact of the unilateralism, the objective is to strengthen the cooperation of the United Nations system, despite the juncture that affects the country.

After the meeting with the Secretary, Antonio Guterres, Minister Arreaza had a word of thanks to highlight that despite the busy schedule of the official, he (Guterres) received him in order to deepen the bonds of friendship and cooperation between Venezuela and the UN.

“We thank the Secretary General of the UN, Antonio Guterres, for welcoming us despite his busy schedule. (Our) cooperation with UN agencies deepens. Multilateralism has to be strengthened to defend the principles of the UN Charter: peace, development and human rights, “he stressed.

On January 24, the UN called for a national dialogue on Venezuela to resolve the political situation in the country, following the threats of a coup promoted by the United States (US) and with support from the Venezuelan right and governments of the region. The political situation in Venezuela became tense after the deputy of the National Assembly in contempt, Juan Guaidó, proclaimed himself “president in charge” of Venezuela during an opposition demonstration in Caracas, a day after the vice president of the The USA, Mike Pence – on behalf of the Government of the North American nation – called for a coup in the country.

In spite of this fact, the constitutional president of the Bolivarian Republic of Venezuela, Nicolás Maduro, accepted the mediating proposal of Mexico and Uruguay for a national dialogue. “I am ready for dialogue, negotiation, for an agreement,” the head of state said earlier.

Since the beginning of his administration, Maduro has made more than 400 calls for dialogue to parties grouped in different political factors of the opposition.