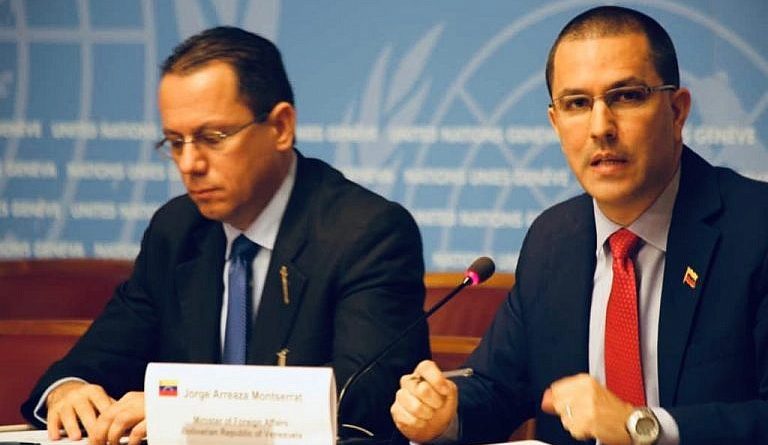 The attempt to apply the Inter-American Treaty of Reciprocal Assistance (TIAR) against Venezuela means a threat against national sovereignty, so “we will defend our territory by all means and in all ways,” said Foreign Minister Jorge Arreaza, this Friday. “The TIAR was not dusted off; it was unearthed by the USA! It was dead, it makes no sense. It was an illegal and criminal operation for the purpose of aggression against Venezuela,”Arreaza said in a press conference at the headquarters of the United Nations (UN) in Geneva, Switzerland.

In his statements, Arreaza highlighted Venezuela’s willingness to maintain relations of mutual respect with the United States, “such that our sovereignty, our system is respected and we can live together, coexist and even cooperate if necessary.”

He also noted that the representatives of the National Assembly in contempt do not have the legal power to make decisions on behalf of the Venezuelan State.

“It is an illegal decision because those gentlemen who sit behind the Venezuelan cartel do not have any legal power to be in the Organization of American States (OAS),” Arreaza said in reference to the alleged Venezuelan representation in that forum.

Report of the UN High Commissioner lacks rigor
Arreaza also reiterated that the report recently presented by the High Commissioner for Human Rights (Human Rights) for the United Nations Organization (UN), Michelle Bachelet, lacks rigor. He stressed that the data obtained in this document come mostly from people outside the country, to which he added that it was “a copy of the previous report.” He noted that although the commission of this multilateral agency was in Venezuela for several weeks, the results do not correspond to the work done. “The conclusions of the High Commissioner’s report are not very rigorous, they are erratic, they do not comply with any kind of rigor. They have used this report as an attack tool against Venezuela,” he emphasized.

Arreaza said that investigations must be carried out with rigor, “do not use only the information that appears in the media. We have the correct data and can obtain it, we do not deal in disinformation strategies”.

In this regard, he said that the errors and inaccuracies of this text will not prevent the Venezuelan Government from continuing to work with the UN to alleviate the effects of the coercive measures applied by the United States against the Venezuelan people.

However, he stressed that the countries that make up the United Nations must raise their voice against these interfering actions of the US government. “In the UN Charter there is no subsection approving the intervention or the execution of unilateral coercive measures against any country,” said the Venezuelan Foreign Minister.