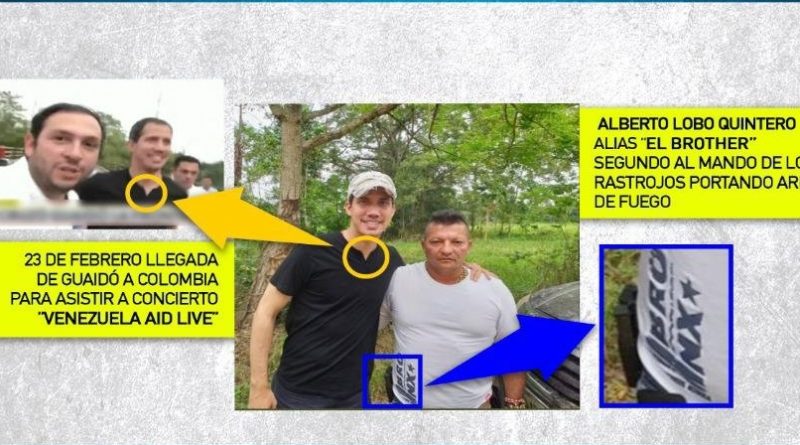 The Minister for Internal Relations, Justice and Peace, Nestor Reverol, revealed on Friday evidence that links Juan Guaidó, deputy of the National Assembly in contempt since 2016, with the band of Colombian drug dealers and paramilitaries Los Rastrojos. He explained that the recent photographs published by a Colombian Human Rights organization, which Guaidó posing next to two hierarchs of the Colombian narco-paramilitary organization, show the terrorist actions planned by the Venezuelan right wing to attempt against democratic stability and peace inside Venezuela.

In that sense, the head of Justice and Peace explained that the photographs date from February 22, 2019, when the deputy in contempt traveled to Colombia to participate in the media show of the entry of humanitarian aid across the border with the neighboring country.

“The departure of Guaidó in February was an operation to extract Colombian narco-paramilitaries who provided security and costumes during the journey from the La Palmita sector, Táchira state to Norte de Santander (in Colombia),” Reverol added.

He stressed that the media and the Colombian police attest that the subjects identified as Alberto Lobo Quintero, aka El Brother and Jhon Jairo Durán, aka El Menor, who appear in the photographs with Juan Guaidó belong to Los Rastrojos drug organization.

“Los Rastrojos gang is one of the most dangerous organizations in Colombia dedicated to drug trafficking, assassinations, kidnapping, extortion and recruitment of minors. On the border they focus on smuggling from Venezuela to Colombia, especially smuggling fuel for cocaine processing,” said the minister for justice and peace.

In that sense, Reverol explained that he will file before the Public Ministry all the necessary evidence so that the investigations can be initiated and justice done.

“Once again we have unveiled this destabilizing plan of the Venezuelan right in complicity with Colombian narco-paramilitarism,” said the minister at a press conference from the Miraflores Palace in Caracas.