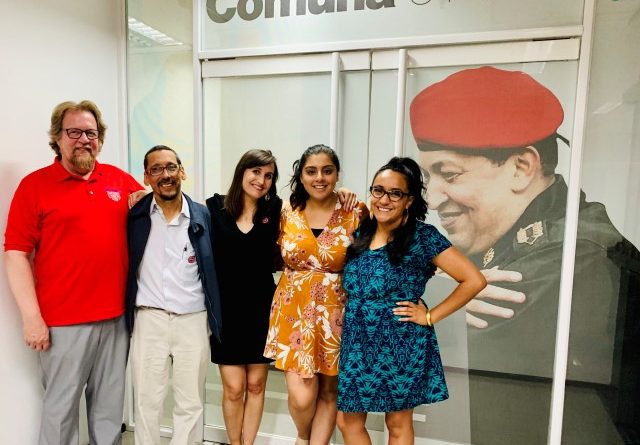 Editorial Note: The most right wing Venezuelan operators in Chicago have started a campaign against the CTU and this delegation. We just want to highlight that as most fascist movements, they just want to impose an only way of thinking forbidding people to make up their minds by themselves as this delegation objective was. They are just afraid of their narrative being confronted.

Caracas, Venezuela – A delegation of members from the Chicago Teachers Union (CTU) arrived in Caracas, Venezuela last week. Their goals were to learn what they could from Venezuela’s Bolivarian Revolution, exchange views on effective education and to show solidarity with the students, teachers and social movements of Venezuela.

The trip falls on the heels of a union resolution that was passed by the CTU Executive Board and House of Delegates. The resolution calls for an end to U.S. intervention in Venezuela. Delegation member and CTU Area Vice President Sarah Chambers explains, “Through major economic hardships, Venezuelan President Nicolas Maduro never closed a single public school or a single health clinic. This stands in stark contrast to our experience in Chicago, where Mayor Rahm Emanuel closed 50 public schools and several mental health clinics in a single year.”

The teachers’ delegation met with leaders from the Venezuelan Foreign Ministry, Ministry of Communes, Ministry of Education, Adult Education Teachers, and students, as well as on-the-ground activists.

One important meeting was when the delegation sat down with Vladimir Castillo, the Venezuelan Director of International Affairs. They learned that Chavez started to talk about socialism in 2005, at the World Social Forum in Brazil, and that a few years after 2007 and 2008, community councils emerged as a result.

Community councils are comprised of around 100 families living in the same area, which estimates to about 400-500 people in total. Chavez also had communes in mind as a fundamental part of the new state. Communes are organizations encompassing several community councils. When communes began, there were a lot of difficulties to channel funds to them. They were neither part of the state nor corporations. They were just organized communities not able to exercise the full strength of their power. The government ended up creating a new set of laws, the Popular Power Laws, which allowed the government to provide money to them directly, which resulted in government-empowered communes.

Projects received different amounts depending on the needs and the scale of the projects. The funds would go to a communal account under the direct responsibility of two members of the communes, the supervision of the commune board, and the community as a whole. This is to ensure that the funds are being managed correctly and going to the stated projects.

Castillo stated that it was easier to form communes in the countryside, since many were naturally working together to farm and to produce goods. This also came naturally to indigenous people, since they often live in collective communities working together. The essence of communes was to produce goods and services, to obtain sustainability, and to address community issues in order for people to improve their own living conditions.

Castillo also told the delegation, “Our world of justice and love in Venezuela includes 2.6 million families receiving housing units for free or for a symbolic price. This means that 10 million people were set free from a life of deprivation and discrimination in the barrios [marginalized housing]. Dignified housing is a Venezuelan right. The economic war has decimated our salaries. We earn an average of $40 dollars a month but we are resisting. If someone would tell you that they can live with $40 a month, you would think they are crazy. Here you can live with $40 a month since so much is free or subsidized. Most of our utilities and what we need to live is free or incredibly cheap, such as electricity, water, gas, gasoline and housing. Once you own a house you do not have to pay taxes on it. Another program the government is implementing is the CLAP – Production and Delivery Local Committees. Boxes with food, like rice, spaghetti, beans, powdered milk, cooking oil, corn flour, and wheat flour are delivered to 6 million families on a monthly basis. Our schooling, college and healthcare are also free. This is why you can live on $40 a day.”

The Venezuelan government has transformed their state budget to where 75% of the nation’s budget goes to social programs. “What country in the world does that?” asked CTU Math Teacher Valeria Vargas, “In the USA, 50% of our budget goes to war. Imagine if that money was put into education or health care? We had to strike for three days to get our charter school bosses to start to spend money on our students.”

Unfortunately, all is not rosy in Venezuela. The mainstream news is right that there are some issues in Venezuela, and the people we have interviewed are in agreement, but where they are wrong is who has created those issues. For example, thousands of people have died here because they do not have insulin. Who is the biggest vendor of insulin? The U.S.

U.S. and European sanctions against Venezuela have caused thousands of deaths. The U.S. imposes these sanctions on other countries too. If another country trades with Venezuela, the U.S. will threaten to cut off trade with them or impose sanctions on that country.

Before Chavez took over in 1998, 60 to 70% of the inhabitants were in poverty and 53% of the poor were in critical poverty. After the 14-plus years of Chavez’ leadership, 12-14% of Venezuelans were in poverty, and only 5% were in critical poverty. Social programs have not dwindled or stopped, they actually advanced. Money going to social programs actually increased and more houses being built to remove people from the poor shacks.

This is all part of “El Plan de la Patria” (the Plan of the Motherland) that was created collectively by Chavez and the Venezuelan people. Maduro is continuing to carry out this plan even under very difficult attacks.

With the help of Colombia and the U.S., the opposition created food and supply shortages before starting to direct violent actions with the intent to provoke a civil war, taking an old chapter from the U.S. imperialist playbook. They called them guarimbas, a Venezuelan name for hide and seek, where armed gangs began to burn tires and form barricades to block streets and entrances into neighborhoods.

Where did these guarimbas come from? From the financial pockets of the Venezuelan elite and the CIA. These groups paid impoverished people to carry out the violence that they were subjected to. For example, they would go into the barrios to find boys who were already in trouble or involved in violence or drugs. The CIA would provide the money to pay them.

Other participants included members of the middle-class neighborhoods, and radicalized university students. The Colombian paramilitaries were also involved in telling these armed gangs what to do.

The gangs would block access to the street, so people could not drive into or out of their neighborhood. People had to walk instead. Armed gangs would often make people pay to pass or they would threaten to kill them.

The Venezuelan government wanted to use peaceful measures to stop these armed gangs. Maduro publicly told the police that they could only use water and tear gas. First, the police would try to reason with them. If that did not work, they would use water or tear gas. Then, the police would wait a few days to see if they would leave. If the guarimbas continued, the national guard would intervene.

Eventually, many of these gangs would halt their criminal activities because ordinary people convinced them to stop, because they got tired of police and armed forces not confronting them, or because the opposition leaders stopped paying them, usually because they would steal the guarimbas money that the CIA funneled through them.

There were four different times where these guarimbas started. Each time, they would follow a period of extreme economic pressure on the Venezuelan people. First in 2008, then in 2013, followed by one almost immediately in 2014 and lastly in 2017.

The economic war was accompanied by cycles of the CIA pushing negative social media and news propaganda, followed by violence with the guarimbas. The CIA expected that the people would join these opposition forces, but it has never worked. Civil war did not happen; the people wouldn’t stand for it. They saw that the U.S.-backed opposition was violent and not for the people.

Dozthor Zurlen, a Venezuelan activist told the CTU delegation, “The U.S. wanted to remove the idea of socialism from our hearts and minds, but it only grew stronger. Even during these intense attacks, social programs only grew.”

The delegation has created a website where they are making posts from their trip. You can find it here: http://radicaleducatorcollective.org.