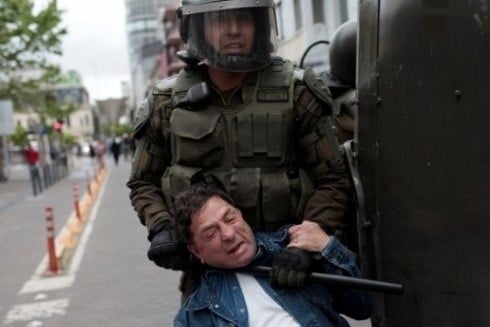 The images that can be found show total violence by the police and the local army. Unlike the dictatorships of the last century, this time the armed forces are beating civilians who only ask that the price to basic elements such as public transport or gasoline not be increased.

Presidents Lenin Moreno and Sebastián Piñera are rising as the big intolerants of the American continent. In Ecuador, there was an unexpected petrol price hike that brought students and indigenous people to the streets, who protested non-stop for days to prevent the man, who delivered Julian Assange, from raising fuel prices in a country injured by poverty. In Chile, the conservative Sebastián Piñera has made it clear that any civil protest, however minimal, will be approached with the use of force. The young Chileans who are on the streets protesting the rise in public transport (one of the most expensive in South America), have been met with blows, kicks, violent detentions and shots at point blank range. A video shows a student shot in the crotch. The right does not dialogue, it represses
This panorama reveals the breakdown of neoliberal governments in Latin America. Although other countries also face problems with the left, the repression of the former is highly violent and the UN has already issued warnings over the amount of excessive violence. In Chile a curfew was imposed and in Ecuador the government had to back down to the indigenous advance who has already removed several presidents from their posts.

But the lack of dialogue between people and government is not only experienced in these two nations. At the moment, Spain is experiencing the same scenarios after the separatists of Catalonia were sentenced to up to 15 years in prison. The response has been similar: police beatings, brutal detentions and gunfire in streets that burn every night. The right is seen, again, as the least tolerant. These scenarios come at a crucial moment, when the right seized the most powerful governments on the continent: the United States , Brazil, Argentina, Chile, Ecuador, among others. With little time in their positions, the presidencies of the right already face the advance of their leftist opponents, who are getting ready to remove them in the following elections.