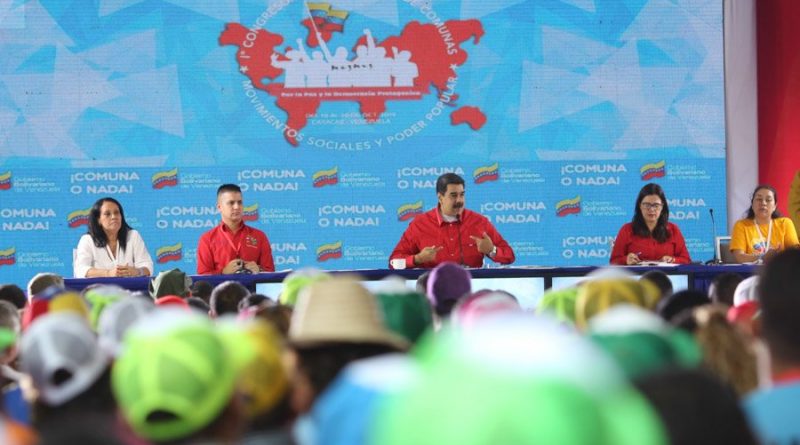 “The communal councils serve more than 6 million 407 thousand 651 families representing more than 80% of the families of Venezuela that participate in urban, rural or indigenous communal council.” This was stated by the head of state and government, Nicolás Maduro, during the closing ceremony of the First International Congress of Communes, Social Movements and Popular Power.

The Venezuelan President said that to date 3,173 Communes have been formed, organized and registered in Venezuela, “Commander Hugo Chavez left in 2012, in the Plan of the Homeland 2013-2019, to reach 3,000 Communes, but the goal is that in a moment all of Venezuela — for the development of the evolution of the last years, has 6 thousand, 8 thousand, 10 thousand Communes and the great majority live in Communes”.

RELATED CONTENT: Government and Opposition Set up Three Complementary Tables Within the Framework of the National Dialogue

He also related that there are 48,090 Community Councils, of which 22,095 are urban, 23,363 rural and 2,632 indigenous; Similarly, 25,772 Communal Social Property companies and 15,000 regulated Cooperatives, duly registered and recognized, are constituted.

He also explained that in the democratic update of the Communal Power, the renewal of 30% of the Community Councils has been achieved, which represents 9,902 community institutions in the country, with the goal for December 31 being 100%. He also stressed that a platform of social forces formed by the Somos Venezuela Mission, the Youth of the United Socialist Party of Venezuela, the Great Patriotic Pole, Homeland Mission, Mission Robert Serra, Movement for Peace and Life, Front Francisco de Miranda and the Feminist Movements, with the purpose of promoting and accompanying the update process, incorporating 284 thousand militants in 297 municipalities and Communes of the country.

The President confirmed that socialism is built where people live through Communal Socialism, and expressed his desire that the world see the experience of the country, where 21st century socialism “goes from the bottom up.” / MQ