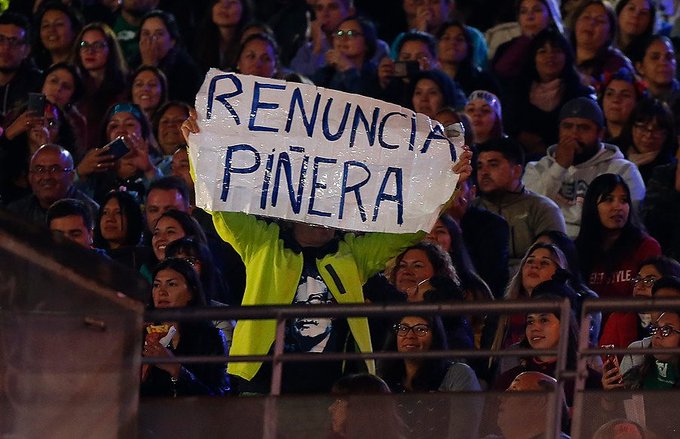 The International Song Festival of Viña del Mar (Chile), the most important music festival in Latin America, began this Sunday amid protests against the Chilean president, Sebastian Piñera.

The social explosion was no stranger to one of the most important festivals in Latin America, those present at the venue, “Quinta Vergara” took the opportunity to show their loathing for President Sebastián Piñera.

RELATED CONTENT: Chile: Let’s Talk about Where the Real Violence is Coming From

Minutes after the festival began, the public began singing songs against Piñera, but the message was not broadcast on television. They chanted: “Pinera mother fucker…assassin like Pinochet…”

However, the videos went viral on social networks, especially on Twitter, where users expressed their annoyance at “having been silenced” in the official broadcast of the festival in Quinta Vergara.

The show was about to be suspended because there were protests in the building of the Hotel O’Higgins, which houses many artists.

RELATED CONTENT: Chile: The Frontal Attack is Just Around the Corner

Chile has been experiencing its most serious crisis since the end of the dictatorship of Augusto Pinochet (1973-1990) since last October, with about thirty dead and thousands injured, as well as serious accusations against security forces for human rights violations, especially sexual misconduct against women and for eye mutilation.

What initially began as a call for students to protest against the increase in the subway rate became a revolt for a more just economic model.

The echo of the massive demonstrations continues and new demonstrations are expected on Monday while the country prepares for a consultation on the writing of a new constitution.