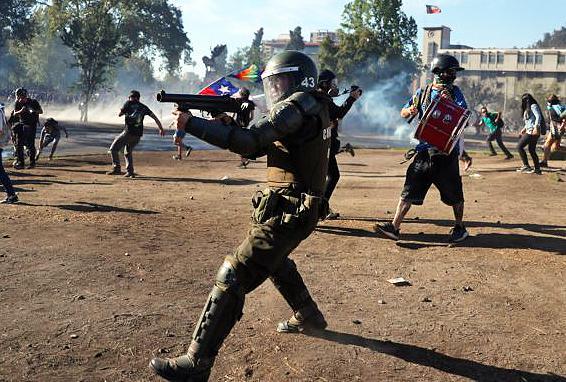 Since the people’s rebellion began against the Sebastian Piñera administration and neoliberalism in Chile, he and the pro-Pinochet right-wing have gathered under Chile Vamos, in collaboration with the institutional press, to stigmatize those in active opposition as rebels and subversive. As the saying goes, “the thief behind the judge.” The violence generated in Chile since October 18, 2019, in some sectors of the demonstrations is simply the response to the official violence exerted against the Chilean people since 1830 to now.

It is the result of a clear and concrete cause; the exploitation of workers to the point of exhaustion by those who have taken over the country, making that appropriation official after the Battle of Lircay in 1830, by Diego Portales, leader of the oligarchy. The oligarchy is manifested nowadays in large economic groups comprised with less than ten business families and many well-paid courtiers who liven up their party. Violence against the population peaked in 1973 when the La Moneda Presidential Palace was bombed, President Salvador Allende murdered, and introduced the horrific human rights campaign by Augusto Pinochet and the coup plotter military junta, while supported by civilians such as Jaime Guzman, Pablo Rodriguez, Sergio Melnick, Monica Madariaga, and a long list of dark characters.

RELATED CONTENT: Chile: The Frontal Attack is Just Around the Corner

After Pinochet’s “exit” from the government in 1990 and the beginning of a supervised democracy, really a mockery of democracy, the abuses, as one might expect, did not end. On the contrary, the economic violence increased thanks to the agreement between Pinochet’s followers and the Concertación (a coalition of center-left political parties). Abuses continued while the media, especially in television, displayed a fantasy country in whose basement was hidden the misery of populations and the indebtedness of the so-called middle class who lived with a mythical social-climbing concept imposed in the popular language as a sign of personal progress and well-being. The above mentioned middle class would be the retaining wall between exploited and exploiters. Anger and impotence continued accumulating while politicians became richer. The oligarchy continued to sow winds beyond the 20th century by way of collusion, overpricing, usury, privatizations, overpayments to politicians, miserable wages to the working people, starvation pensions, etc.

What is more violent than a nation with a multimillionaire president and thousands of homeless citizens, elderly selling band-aids on the corners, people dying while waiting for medical attention in waiting lists? What is more violent than millionaire pensions received by former presidents and the stratospheric wages of lawmakers, who dictate laws immensely favorable to the country’s richest? All this accumulated violence is the cause for the violence erupted after October 18, a violence which, by responding to violence against the people, becomes the people’s own defense. People have the right to defend themselves. Let’s not forget that the Sebastian Piñera government responded to peaceful demonstrations with the systematic violation of human rights: murders, tortures, mutilations and sending to the streets its dogs knowns as the Carabineros police along with the armed forces and civil police. The Pinochet force continues with its permanent violence in the country. People in their desperation could not stand it anymore and the winds sown by their abusers gave way to a legitimate storm in search of social justice and an end to the abuses, a natural need to recover what had been lost. The magnitude of the storm also led to a real possibility of removing forever Pinochet’s constitution and to remove political parties from their seats. To vote on April 26 for a new constitution and to continue mobilizing in the streets to prevent a fraudulent constituent assembly is the way that must be strengthened. Voting and mobilizing in the streets are not antagonist contradictions. They complement each other in the struggle nowadays. “Chile Desperto” (Chile Woke Up) is the slogan of the insurgent. This is to say, little by little, the social conscience of the majority of Chileans has been leveled with social existence, giving way to the hope of finally freeing themselves from neoliberal chains. That must not stop.

What about the drug dealers and the lumpen? They are chatting and crossing themselves in the “Chile Vamos” coalition. Well, drug dealers and crime are not the product of magic or international Marxist communism. No. They are the product of the violence that generates poverty, lack of opportunities, segregation and stigmatization of populations. Drug dealers and criminals grow and strengthen in the violence generated by Chile’s upper class, the rich who offer dreams and wonders of life to those who exploit, but take away the surplus-value of their work so that they cannot achieve those dreams and wonders. In the face of this violence, many people are thrown off course. The violence of the rich gives them no other option. In my opinion, as poet Jose Angel Cuevas says, they are “the story of some people/ in silence who burned/ all their photographs.”