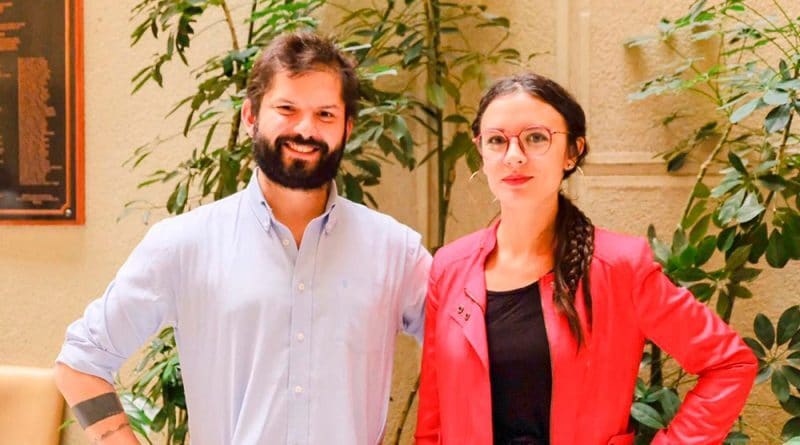 Now that all the hegemonic media on the right, as well as a significant number from progressivism, are telling us who Gabriel Boric is—winner for the ”left” in the presidential primaries in Chile, defeating Daniel Jadue, it is worth taking into account some information that complement the profile of the person who will be the presidential candidate in the elections of November this year. All biographies of Boric show us a ”politician of the moderate left” ”respectful of human rights,” factotum of the ”peace agreement” with Piñera, etc, etc.

Hence, it is worth remembering that during the entire popular revolt that Chile has lived since October 2019, Boric could not approach any of the large demonstrations and even less the Plaza Dignidad because young people rejected him not only for having joined the bourgeois political caste that offered Piñera ”a way out” when the extreme-right neoliberal president was most besieged by the popular revolt, but also for having voted with the right wing in support of the fascist ”anti-barricade law” that the government brought in against the people who went out into the streets again and again to repudiate State repression.

For such political positions, Boric was denounced publicly by a group of young people in the center of Santiago, accusing him of having ”sold himself.”

However, there is more to the candidate’s resume. If there has been something constant about Boric in recent years, it is his attacks against the Bolivarian Revolution and the Cuban Revolution, including even this week, after the opposition demonstrations in Cuba. This needs to be mentioned because, beyond the fact that very few people voted in these primary elections, demonstrating the little credibility given to the political class, the results also finalized the candidates of the ”left” and the right. Boric won with a huge and unexpected margin over Daniel Jadue; hence, it will not be entirely wrong to assume, as some Chilean analysts have already pointed out, that his victory was more due to a strategic move by the right, that might have sent its activists and supporters to vote for Boric instead of Joaquín Lavín, the right-wing candidate who had been leading all the pre-election polls but lost, rather unexpectedly, to Sebastián Sichel in the primaries. Why would the right do that? Simply so that communist Jadue, a steadfast activist in solidarity with Cuba and Venezuela, and one of the champions of the Palestinian cause on the international level, does not become a candidate for the presidency of Chile.

In other words, when the deceptive platforms of Chilean social democracy want to sell us the idea that Boric is LEFT, let us not continue to get fooled by those lies. The leaders of the Chilean Socialist Party are also said to be ”left” who, to the greater shame of those who once aligned themselves with the martyr President Salvador Allende, have just condemned Cuba, joining the chorus of destabilizers against the Revolution, promoted by the United States. They, Boric and some others who use the label of ”left” are nothing more than mere collaborators of the empire. It is better to take this into account now so as not to regret later.

The other face of Gabriel Boric (Tweets):