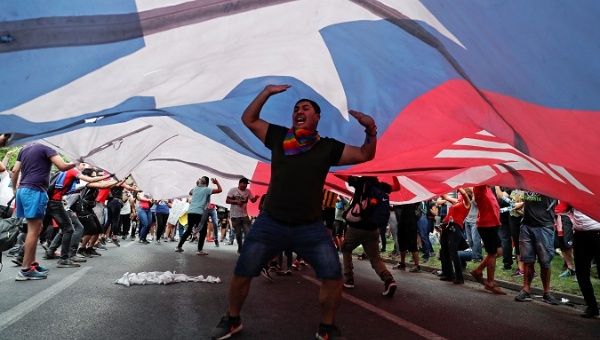 Due to flagrant violations of human rights, Chileans are not satisfied with the announcement of a new cabinet.

After more than 1.2 million people on Friday gathered in Santiago to demand his resignation, Chile’s President Sebastian Piñera on Saturday requested the resignation of all his ministers and announced that curfews would be lifted on Sunday.

“I have put all my ministers on notice in order to restructure my cabinet to confront these new demands and take care of the new times,” Piñera said from the La Moneda palace.

Regarding the main demand of the Chilean population, however, Piñeda was absolutely silent, for he did not make reference at all to his resignation.

After weeks of keeping an informational fence, which was used to criminalize social protest, local mainstream media had to mildly recognize that the October 25 march was the most enthusiastic rally of the Chilean population since the end of the Augusto Pinochet dictatorship (1973-1990).

Surprisingly, in what could be understood as a symbolic distancing from the Piñera administration, famous politicians from the most conservative elites had a similar reaction.

“One million people demonstrated peacefully. I don’t know if they are from the left or the right; however, they clearly reject this government and the leadership we represent. The message is clear,” the Republican Action leader Jose Antonio Kast admitted.​​​​​​​

Nevertheless, changes in Piñera’s cabinet did not satisfy the Chileans who are already announcing new protests, for human rights violations experienced since Oct. 18 make his statements “empty.”

Chile’s Interior Minister on Saturday acknowledged that 20 people have died. In addition, according to the National Institute of Human Rights (NHRI) data, 3,162 people have been arrested, 343 of whom are minors. Until Friday night, 997 citizens were injured, 437 of whom were shot by security forces.

“Do you think that over a million Chileans who marched asked for something other than your resignation? Do not play ironic. There are 19 dead due to the Piñera brutality. And you are very comfortable exercising cynicism through Twitter,” Solana Ponferrada, a Chilean woman, said.​​​​​​​