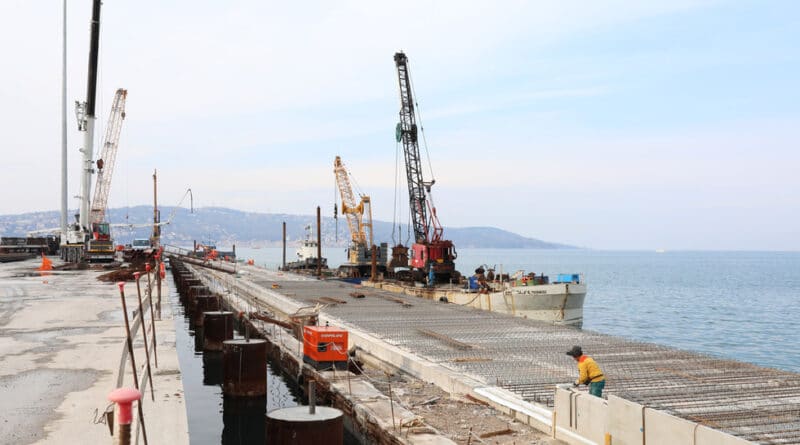 The Belt and Road Initiative, China’s superproject to create a New Silk Road across the entire Eurasian continent, could become a bridge to the future for everyone along the road, bringing both economic and political liberation.

In October 2008 a special train arrived at the port of Hamburg – Germany’s biggest port in the country’s second largest city. It transported 50 containers with IT products from China, crossing about 10,000km in 17 days to reach its destination. On its way from China it used the rail network of several countries, including the Trans-Siberian railway in the endless expanses of Russia. In 2011 another train from China took 16 days to arrive in the German city of Duisburg – the world’s biggest inland port. In 2013 a new record was set: a train with 51 containers finished the route from China to Hamburg in 15 days. For comparison: a container ship needs twice the time for this.

Eurasian bridge into the future

The operating company Transeurasia Logistics, also known as China Railway Express, was a joint venture between Germany, Russia and China. It was marketed as the ‘Trans-Eurasia-Express’. In 2017 Transeurasia Logistics became a subsidiary of Germany’s biggest railway corporation Deutsche Bahn and was renamed DB Cargo Eurasia. This indicates that the need for such infrastructure is growing and the future potential is being recognized in Germany.

A well-developed rail network between Asia and Europe offers an alternative which is faster than transport by ship and cheaper than plane. There are great development opportunities and for years, there have been suggestions in Russia to make transportation faster by using the latest technology. One of the ideas is using vacuum tubes to accelerate containers to speeds around 1,000km/h. This could shorten the transportation time to a few days, maybe even less than one day. Hard to imagine, but this would make it possible to deliver products from China all the way to Germany faster than a letter reaches its recipient within the country. However, there would be huge construction costs and it is uncertain whether the technology is advanced enough yet.

One thing is certain, in 2016 Russian Railways had talks with private company Hyperloop One from the US and set up its own Transport Ministry working group to develop the vacuum-tube tech on Russian soil. There is also a possibility for independent technological developments in Russia or further collaborations between China, Russia and Germany in the area of transportation technology. These existing and prospective major projects for infrastructure development between Europe and Asia are sometimes referred to as the New Eurasian Continental Bridge. They are tightly connected with an even larger project: the Belt and Road Initiative, in short BRI, also known as the New Silk Road.

Up to $8 trillion for Eurasia and Africa

The Belt and Road Initiative is the biggest infrastructure development project in history. It links the continental transport routes of Eurasia with maritime infrastructure in south and southeast Asia, Africa and beyond. The aim is to invest $4 trillion to $8 trillion. BRI puts a strong focus on developing economies and regions. So far around half of the investments went to states that Western rating agencies consider high risk and which have no prospect of receiving serious investments from the EU or the US. And if there is Western involvement, then it’s often based on a form of neocolonial exploitation or quick profit and depletion of resources. It is therefore understandable that these countries are very open for new parties with a different approach, especially in regions like eastern Africa.

It is also understandable that politicians and mass media in the Western imperialist centers are worried about this new alternative and possible way out of neocolonial dependency. But the people in Africa are presented with a choice. On the one hand, there are the EU’s empty promises and milk powder that ruins local dairy farmers and creates economic refugees – basically a depopulation program, with doctors and specialists that are already in short supply also leaving their home countries. On the other, real, long-term investments by China to create infrastructure, without cultural imperialism and interference in the social and political development of the state – usually a silent requirement for Western investments. In the long term, these countries are far better off by joining the Belt and Road Initiative.

China is not doing this out of charity. Such long-term infrastructure projects are risky but, in case of success, they pay off more than conservative investments. The recipient countries have little to lose from Chinese investments. It is not about dependency on another charity industry, nor about IMF loans that create even more poverty. BRI creates new roads, railways, ports and power plants along its way.

Historic opportunity for Germany and Europe

But not only developing countries profit from these investments. For many states in Europe and especially for Germany this creates an opportunity to get away from the one-sided alignment with the West (Westbindung) and at least create a second pillar to the East. Germany in particular has the chance to secure its worsening energy supply with Russia and to create jobs and prosperity through stronger economic cooperation with China and Russia. Above all, it would create a perspective for long-term growth together with the emerging economies of the East. Entirely without imposed neoliberal ‘values’, without obligations to cut social welfare or to participate in imperialist wars.

There are already examples of success in Europe, one of which is Duisburg. After the collapse of the coal and steel industry, Duisburg, like many other cities in the region, struggled with high unemployment rates. The port, Duisport, is now the westernmost junction of the BRI. Every week up to 40 freight trains from China arrive at the port. Eighty percent of the trains arriving from China to Europe have Duisburg as their destination, making it a key distribution center for all of Europe. For the people living there, this meant 7,000 new jobs and future prospects. According to estimates by Deutsche Bahn, 100,000 containers would have arrived in 2020. In fact, already in 2017 around 100,000 containers were transported on the Eurasian rail network, with increasing numbers.

The full potential of the BRI in Europe is not yet realized and the development has a positive tendency: in 2019, the train connections had already reached 50 cities in 15 countries, including London and Spain. By now, some of the trains take only 12 days to arrive in Duisburg. For Germany, Russia and China this offers a historic opportunity to jointly create a Eurasian economic area with huge potential for growth and future developments, which would benefit all states from Europe to Asia not only economically but also politically. The Belt and Road Initiative is more than an economic project: it leads to a multipolar world based on peace, sovereignty and prosperity.