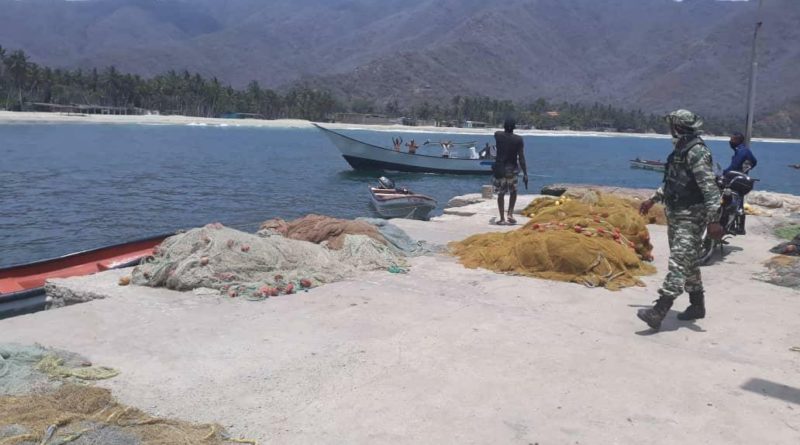 The image of a villager and a militiaman completing the work of a Naval Aviation helicopter gunship, which consisted of stopping the vessel occupied by eight paramilitaries and capturing that crew sent by the governments of the United States and Colombia, has been incorporated into the exploits of the Chavista era as a concrete example of the civic-military union.

The concept of this union has been fundamental to Chavista thought since it originated, it has its roots in the independence and popular struggle of the last century, since social and military parts converged in the overthrow of Marcos Pérez Jiménez, the last Venezuelan dictator ousted in 1958.

Fabricio Ojeda, leader of this movement that was betrayed and assassinated by the Raúl Leoni government, incorporated it into his praxis and his work La Guerra del Pueblo (1966) where he states:

“The anti-feudal and anti-imperialist base of our revolutionary process proposes the kind of alliances that are above the origin of the political creed, of the philosophical conception, of religious convictions, of economic or professional status and of the partisan affiliation of Venezuelans. The common enemy, its strength and power, demand a unitary fight to defeat it. The following forces are inclined to fight for national liberation: the workers and peasants, the petty bourgeoisie, the students, intellectuals, professionals, most of the officers, non-commissioned officers and soldiers of the armed forces of air, sea and land.”

A union “vital to the future of the world”

With its incorporation in the Bolivarian military doctrine, Hugo Chávez enriched the concept during the construction of the so-called Bolivarian Agenda, that more than a government plan has been an idea of national transformation in which the people are conceived as a great army at the service of the defense of national sovereignty and independence.

Upon reaching the presidency of Venezuela in 1999, in addition to convening a consultative process for a National Constituent Assembly, he implemented a social care plan called Bolívar 2000 that included state institutions and the then Armed Forces (FFAA), which sought to form an army not separate from the people.

An attempt was made to bring the people and the Armed Forces closer from the distancing caused by the repression that they implemented against the population throughout the Fourth Republic, in particular that ordered by the Adeco government of Carlos Andrés Pérez during the popular rebellion of February 27, 1989 against neoliberal IMF measures.

The change was to begin on April 13, 2009. That same date, but in 2002, the combined mobilization of civilian and military forces defeated the coup against Chávez financed by the Bush administration and the national elite business.

The essence of the people in arms

The concept of “people in arms” is essential in the popular resistance of Venezuela against the attacks of the transnational siege on the country. Chávez’s vision is summarized in his words during the “Aló Presidente” Program number 353, on March 14, 2010, from Cumaná, Sucre state:

“The Bolivarian militias, the Bolivarian National Militia. The people must prepare for defense, the fishermen must be soldiers, but not only in words, no, trained in the use of weapons, when it comes to an attack that God does not want, but well, you never know, do you? Right? The Empire has its sights set on us, the Bolivarian Revolution, and the Empire worries when it sees these things, you see? Because the Empire is terrified of the success of the Bolivarian project, it is terrified because we are demonstrating that the development of peoples is possible through socialism and not through capitalism. This is vital for the future of the world, what is happening here, we cannot fail, so they are going to try to sabotage us as they have done, as they have done to Cuba, the blockade, that is sabotage of the Cuban economy.

One of the important aspects in the conception that the Bolivarian leader implemented is the presence of the militia in the key facets of national development, hence it is organized in each field, university, factory or neighborhood.

RELATED CONTENT: Trump: “If we Ever did Something with Venezuela, it Would be Called an Invasion”

It is a strategic military concept, but also a social and political one, for the comprehensive defense of the nation, as important as the anti-aircraft defense system or the naval fleet, based on the voluntary participation of citizens, in their responsibility to defend social guarantees.

The organization and incorporation of the “people in arms” into national defense seeks comprehensiveness in the preservation of sovereignty and peace in the territory.

“It is the people in arms, the war of all the people (…) We have no plans to attack, but we are going to turn Venezuela into a country capable of defending every last inch of the territory and for that the participation of the people is important,” Chavez explained on that occasion.

The Bolivarian National Militia, which has its own General Command and its respective General Staff, depends operationally on the Strategic Operational Command linked to the FANB’s chief command (CEOFANB).

It is made up of the National Reserve, made up of all Venezuelan citizens who are not in active military service and of the militias themselves, made up of the Territorial Militia and the Combatant Corps. Its basic element is the Popular Unit for Comprehensive Defense (UPDI).

The members of the Territorial Militia gather on weekends to receive military training, during the week they carry out various activities and can be summoned to muster if necessary in the face of other extraordinary occasions or emergencies.

The so-called Rural or Peasant Militia is part of it, whose arms and equipment differ from the rest of the force. The leadership of each Territorial Militia is made up of officers trained within the militia and reservists.

The Combatant Corps are formed by workers or retirees from certain public bodies and public or private companies, they are in charge of ensuring their integrity and operability with a minimum of personnel. They muster once a month.

In this regard, the Minister of Defense, Vladimir Padrino López, stressed that “it has incorporated new concepts, such as the Territorial Defensive System, Integral Defense and the Civic-Military Union; the latter is not a cliché, it is a principle, the basis of co-responsibility to guarantee national freedom and independence.”

A town like Chuao, which has endured 400 years of attempts at domination and acculturation, is today the center of attention of the Venezuelan anti-imperial struggle and is highly symbolic. In this case, the common enemy for civilians and the military is the one who renounced politics and the peaceful exercise of rights in favor of aggression and the seizure of rights from a country under siege.

Transnational elites do not have an armed force kneeling at the foot of their interests in Venezuela, so they resort to hiring mercenaries for their assassination and coup objectives that a brave community has peacefully but firmly neutralized.

The episodes that have placed the Venezuelan population at the forefront of events, based on popular intelligence and organization, have once again revealed that the Chavista conception of the “people in arms” is not mere rhetoric but a doctrine on the praxis capable of dismantling attempts at political and military destabilization against the country.

Featured image: A Chuao fisherman gun in hand ordering the mercenaries to surrender. Mercenaries in the boat hands up Photo: Twitter