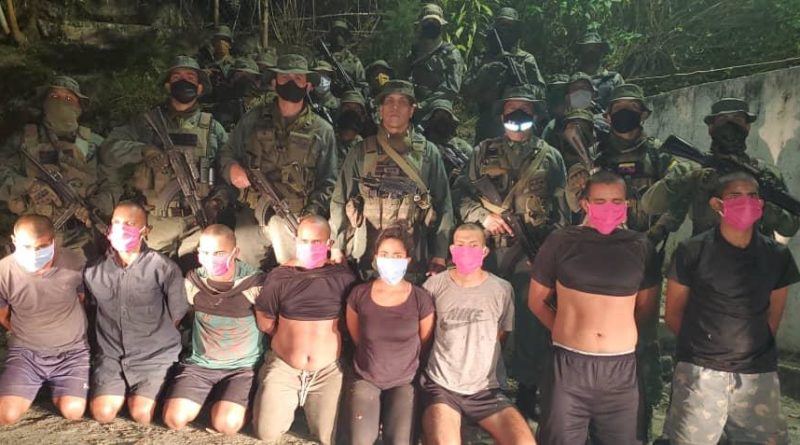 Venezuelan state security officials captured another group of eight paramilitaries, made up of 7 men and one woman, on Sunday night, involved in the US led mercenary operation on the Venezuelan coast aiming to kidnap/kill President Nicolás Maduro and his cabinet. The group was led by the nephew of former deserter Clíver Alcalá Cordones currently protected by the US regime. The arrest was carried out in the Petaquirito area, Carayaca parish, La Guaira state.
The arrest was made by officials of the Bolivarian National Armed Forces (FANB) and organized communities, a report by Venezolana de Televisión broadcasted this Sunday night.

RELATED CONTENT: Civic-Military Union: The Chavista Paradigm that Defined the Latest Events of the War Against Venezuela
The detainees are:

RELATED CONTENT: Amb. Moncada: Between 2007 and 2017 the US Spent $ 250 Billion on Mercenaries
Since last Sunday, May 3, the security forces have been deployed in search of all the terrorists involved in this paramilitary operation, in which the governments of Colombia and the United States (USA) are linked, and which would have been led by a private US “security” firm, Silvercorp, hired by Juan Guaidó under a contract that has come to light.
So far, more than 30 have been captured for these events.

Earlier this Sunday, three other mercenaries were captured in La Colonia Tovar, Aragua state.
On March 26, Alcalá Cordones confirmed the existence of three camps in Colombia where paramilitaries were being trained to attack the country and selectively assassinate senior Venezuelan officials, including the head of state.