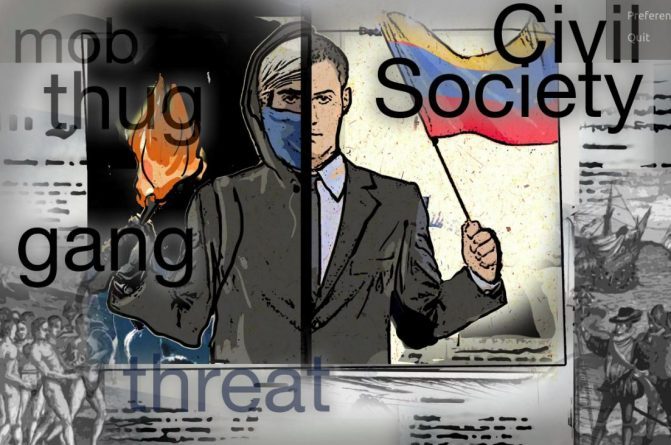 After the arrival of Columbus in 1498, Venezuela was set up as a plantation economy in which small groups of European land-grabbers enslaved large groups of indigenous Americans to produce primary products. They, decimated by the invasion and conquest, were succeeded by captured Africans brought into the territory, whose lives were similarly held of little account.

After the long independence struggle and the final abolition of slavery in the mid-19th century, the structure of the economy changed very little. A white creole landowning elite replaced direct Spanish rule, while indigenous and Afro-Venezuelans were effectively barred from well-paying jobs in the oil industry, meaning that today the poor are mostly black and the black are mostly poor.

Attempts were made to whiten the make-up of the population in the 19th and 20th centuries, with government programmes giving European immigrants much of the most productive land. Irish academic Barry Cannon has cogently argued that white in Venezuela is shorthand for beautiful, pure and sophisticated, with black the symbol of ugly, poor and unintelligent. Black people are “practically invisible” on Venezuelan television, presented only as feckless lowlifes, and “black is highly undervalued, if not despised” in the country.

Before Hugo Chavez’s advent to the presidency in 1999, there were almost no non-white TV show hosts in this majority non-white country. The intersection of race and class can be seen in advertising, where products aimed at the elite use white models while those aimed at a working-class audience often feature darker-skinned models.

Many academics who have studied the Venezuelan media have argued that media label only middle-class groups as forming civil society, while demonising working-class groups as hordes, gangs or riffraff. Previous work has detailed the close connections between the Venezuelan elite, Venezuelan media and Western journalists, with Western media often hiring local elite journalists as correspondents and taking their cue and political line from local publications. What has never been studied before is how the international media represent Venezuelan civil society.

Luis Duno-Gottberg says the local media has attempted to construct two distinct groupings of political actors: rational, respectable ‘civil society’ groups who oppose the government and the dangerous ‘mob’ of dark-skinned, lower-class degenerates who support it.

For Juan Antonio Hernandez, the discourse of the white elite has been to present itself as ‘civil society’ and the dark-skinned, working-class majority as a barbaric ‘permanent threat to society’. Hence, he says, the term ‘civil society’ has become an empty signifier, used only to describe groups belonging to the privileged white elite that are in opposition to the government.

The Western media closely mirror the racist and classist coverage of Venezuelan media. One reason for this is that Western journalists going to Venezuela typically live and work in the exclusive east side of an intensely racially and socially segregated Caracas. Most such journalists live in exclusive gated communities with armed guards and rarely travel outside the rich, cosmopolitan east side. Therefore, they rarely come into contact with the poor, dark-skinned majority of the country.

Many do not speak Spanish and so cannot in any case communicate with the bottom 95% of the population who do not speak English. This further limits them to communicating almost exclusively with elite sources.

They also work closely alongside established local journalists, who are overwhelmingly from privileged backgrounds and from highly partisan, opposition media organisations.

The dehumanisation of working-class, dark-skinned Venezuelans was ramped up in 2002, during the coup attempt. On 11 April, large demonstrations overwhelmed Caracas. Opposition civil society groups said Chavez’s actions as president, including his verbal attacks on the church and business groups, were eroding democracy. It was the renationalisation of state-owned oil and gas company Petróleos de Venezuela, SA, which they saw to be neutral and independent, that was the final straw for many in this group.

As anti-government protests met pro-government marches, shots were fired; 19 people were killed and 69 wounded. Opposition leaders blamed Chavez for the violence and, with the help of military units, arrested him and installed in his place Pedro Carmona, the chief of the Chamber of Commerce.

Representatives from all sectors of the elite – the Catholic Church, military, business, media and trade unions – signed the colloquially known Carmona Decree, which abolished the new Constitution, suspended the Supreme Court, liquidated Congress and gave Carmona the power to rule alone by decree.

The racial and class composition of the new government was evident even to the coup-makers, with Carmona’s advisers beseeching him to find at least one non-white person to put in front of the cameras broadcasting the events. But Carmona did not find one.

There is no consensus on who was responsible for the murders; those sympathetic to the opposition stress a lack of certainty over who was guilty, while those on the other side take it as a virtual fact that the opposition was responsible. However, even the strongest critics of the chavistas accept that what took place was indeed a coup.

The coup leaders appeared on television and announced lists of hundreds of political figures to be “detained”, while a purge of more than 500 journalists deemed enemies of the new regime took place. In less than a day, more than 100 were imprisoned, state television was forced off the air and many local, independent media houses were invaded and destroyed, with journalists being tortured and others publicly flogged.

But the new government lasted only two days, as large numbers of dark-skinned, working-class Venezuelans came down from the hills around Caracas to protest. These peaceful mass demonstrations encouraged loyal army units to retake the presidential palace and rescue Chavez.

Released documents show that the coup and violence had been planned from the start, and that the United States government was intimately aware that the opposition was planning to provoke and exploit violence in early April to push through a coup.

The US initially supported these actions, with the White House calling them “peaceful demonstrations” that Chavez had ordered suppressed, and it pressured regional body the Organization of American States (OAS) to recognise Carmona. However, the OAS immediately denounced what it saw as a violent coup d’état and expressed solidarity with the Venezuelan people. By 15 April, the US government had backtracked and itself condemned the coup.

This is the context in which the Western media portrayed the groups responsible for the coup as ‘civil society’ while the lower-class groups defending the Constitution were dangerous mobs and threats to democracy.

For example, according to The Washington Post on 21 April 2002, the opposition was “inspired” and “energetic”, “democratic”, “civil society”, and the working-class groups opposing the coup were “hard-core”, “bullies” – even while the inspired democrats were gunning down the hard-core bullies.

Across a sample of 501 articles in seven leading Western newspapers, there were 35 references to opposition groups as representing a respectable ‘civil society’, but chavista groups were not once described in the same manner. This across-the-spectrum uniformity adds weight to Hernandez’s theory that the term ‘civil society’ is an empty signifier, a technical term used only to describe elite groups.

British newspapers used the same framing as the local opposition: presenting opposition groups as respectable civil society “protesters” employing their right to demonstrate, while simultaneously disparaging chavista groups as violent, unthinking gangs or mobs. At no point was any opposition group referred to as a horde or a mob, while a working-class or chavista group was never referred to as civil society throughout the entire sample of 501 articles.

Since 1998, the Western media has shown an overwhelming tendency to represent chavista groups as dangerous gangs, hordes or mobs, while simultaneously depicting opposition groups as respectable members of civil society, mirroring the local media’s positions.

Whenever words such as “mob”, “gangs” or “hordes” were used, it was solely in reference to the largely working-class, largely dark-skinned government-sympathetic organisations and never once used to describe the largely white, upper-class opposition groups.

Likewise, the dog-whistle term “thug” was used only to describe chavistas inside a context where chavista and black are understood to be virtually synonymous.

What makes this particularly notable is that the sample periods coincided with the height of the opposition’s offensives to force the chavistas out of office through violence.

In 2002, it launched a deadly coup against the democratically elected government, bringing in a short-lived dictatorship. In 2013, the opposition refused to accept the result of internationally recognised elections, leading to deadly riots. And in 2014, it launched a campaign aimed at forcefully removing the president once again.

Yet across the seven newspapers sampled, those opposition groups were framed as ‘civil society’, while those opposing their actions were mobs, thugs and paramilitary hordes.

This is an edited excerpt from an academic article, Chavista “thugs” vs. opposition “civil society”: Western media on Venezuela, published in Race & Class.