Screenshot of the viral video of the clash between Colombian and Venezuelan authorities.

A clash between the Venezuelan and Colombian military that went viral on social media platforms this past weekend occurred in Venezuelan waters. Despite this, private corporate media circulated the fallacy that Venezuela’s military violated Colombian territory.

The viral video showed how Bolivarian National Guards were doing a routine inspection of a Colombian vessel that had crossed the border. At that moment, a third boat appeared, carrying Colombian military personnel, and tried to slip through and thus avoid a rigorous inspection. Meanwhile, the individuals who were the subjects of the inspection harassed the Venezuelan military. Some of those onboard identified themselves as Venezuelans.

The place near the border was in Río Negro, Amazonas state, a location that is recognized as a drug trafficking corridor. This detail makes it even more clear why the Bolivarian National Guard had the duty and obligation to carry out the inspection.

Suspicions revealed by analysis
The fact that the Colombian military vessel seemingly protected the boat that was being inspected raises suspicions. In theory, they would not have known what the boat was carrying on board, nor the nationality of the crew.

In addition, the video disseminated on social media platforms ends at the precise moment when the Venezuelan Bolivarian National Guard (GNB) firmly responds to the Colombian military personnel “why would we have to leave?” The statement followed the Colombian soldiers’ request that the GNB leave the area. 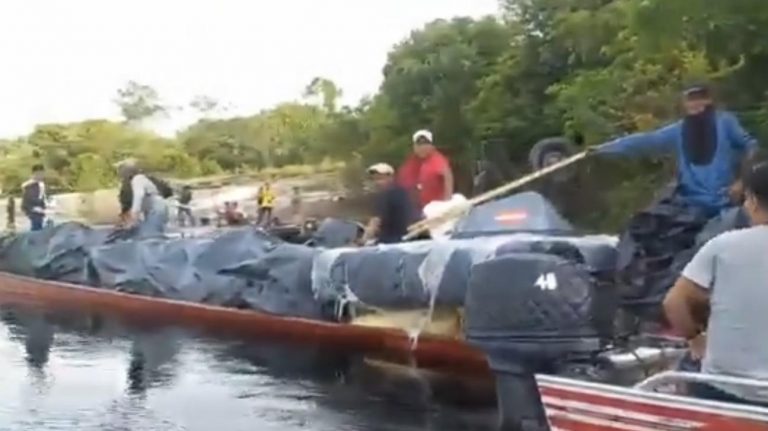 At no time were the Colombian military curious about the cargo of the boat being inspected. They did not ask if that boat and its crew were Venezuelans or Colombians. Despite it not having any flag, they knew it was Colombian and jealously defended the hidden material.

The video was spread by Twitter accounts, evidently of anti-Chavistas, while other accounts retweeted and shared the video without providing context or comments, typical of a media smear campaign executed by a computer lab.

Telesur journalist Madelein García, who covers international affairs through her Twitter account @MadelinTLsur, published the coordinates where the clash occurred: 01° 55′ 48.3″ N Longitude 067° 04′ 09.3″ W Venezuela, Amazonas state. According to the aforementioned coordinates, all the action clearly took place in Venezuelan waters.

The Venezuelan Foreign Affairs Ministry responded to a statement made by the Colombian Foreign Ministry in which it claimed—without any proof and apparently seeking to generate conflict—that the incident occurred in Colombian waters.

Below is the unofficial translation of the Venezuelan communiqué:

The Bolivarian Republic of Venezuela rejects the inconsistent statement from the Colombian Foreign Affairs Ministry published this Sunday, August 29, 2021, which seeks to increase tensions between countries, generating false conflicts in interactions that can be resolved with coordination between local authorities, while making a sincere call to the Colombian government to maintain formal contacts that allow permanent communication of all border issues in a practical way, and without fanfare.

In this regard, it considers that due to the complexities in the common border, these types of issues require diplomatic coordination. However, the unwillingness of the Government of Colombia to establish communication channels makes it difficult to work more efficiently in favor of legality at the border.

The Government of the Bolivarian Republic of Venezuela reiterates its faithful commitment to the International Navigation Treaties and Agreements and its sincere willingness to cooperate and coordinate joint actions, with the aim of guaranteeing a safe and stable common border for both countries.

Featured image: Screenshot of the viral video of the clash between Colombian and Venezuelan authorities.