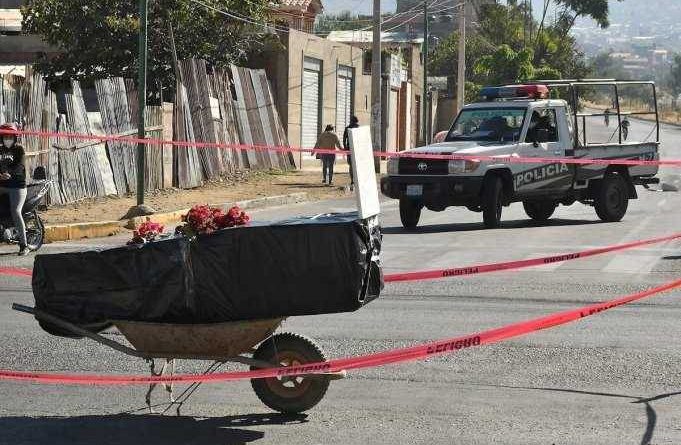 Neighbors from the Bolivian city of Cochabamba placed a coffin on a  wheelbarrow and wrapped it in bags this Saturday and leaved it in the middle of the street, to draw attention to the drama that involves waiting up to seven days with a deceased at home without the family being able to bury or cremate it.

The coffin was left in the middle of an avenue in Cochabamba, one of the main cities of Bolivia, on top of the wheelbarrow with a black bag that covers the coffin and a few flowers, with a white sign that says “May I Rest In Peace (QEPD), seven days, killed by covid-19.”

The wheelbarrow with the coffin was surrounded by a red ribbon that says “danger”, so that people do not get too close, while a group of neighbors around them demands their early burial or cremation.

The family can no longer have the coffin at home for fear of contracting the disease and not finding a space for burial or cremation, due to the collapse in the city’s cemetery and crematorium, they decided to take the coffin to the street in protest and waiting to find a solution.

One of the neighbors said that in the area there are five deceased who are in the same situation and relatives are desperate.

Similar situations have been repeated for days in the streets of this city of just over 600,000 inhabitants, as well as at the door of the General Cochabambino Cemetery, where families waited with their coffins to be cared for.

Faced with this situation, funeral workers protested to make more spaces available for burials or to authorize “a covid-19 cemetery,” while the cemetery workers declared an emergency after the death of one of their colleagues, demanding rapid tests for coronavirus.

The Mayor’s Office authorized more mass graves in that cemetery and the expansion of the crematorium is in process to address this problem, but neighbors who live near the cemetery blocked the passage of vehicles with stones and tree branches in rejection of this decision for fear of contagion.

Bolivia registers 1,320 deaths and 36,818 confirmed infections by coronavirus in the country, of some eleven million inhabitants, with high numbers of deaths and positive cases according to their population and some studies.

The de facto government led by Jeanine Añez who proclaimed herself as president after a coup d’etat against Evo Morales -last November- have shown the same lack of interest in saving life of Bolivians as the rest of the president of the Lima Group and Covid-19 related corruption scandals have kept occupied public opinion in recent weeks.

Featured image: Coffin containing a covid-19 victim left in the middle of the street in the city of Cochabamba, Bolivia highlighting the health catastrophe affecting most Lima group countries in the region. Photo courtesy of @CircuitoGL.