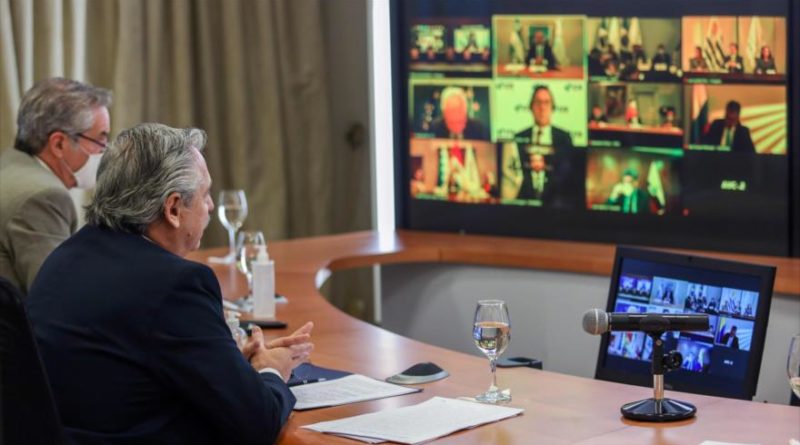 In the framework of the virtual summit of Mercosur, the President of Argentina, Alberto Fernández, made evident his distancing from and disagreement with the de facto government of Bolivia, chaired by Jeanine Añez, with the simple and notorious gesture of abandoning the videoconference in the just moment when Añez spoke, irrefutable proof that there is an important gap in the relations of both governments and a fracture within Mercosur.

“The TV coverage in Argentina was turned off just after Uruguay’s Luis Lacalle Pou finished speaking and the provisional president of Bolivia, Jeanine Añez, was just beginning to speak,” says the right wing Clarín website.

In the same way, the conservative outlet describes the action as “a disrespect” by President Fernández, adding that the leader “rose from the plenary session because he considered Bolivia to be a de facto government”, that is, a government that was implanted after force, violence, death and not by democratic and electoral means, as the people and the constitution mandates.

If you take into account that in December 2019, the government of Argentina, along with that of Mexico, guaranteed asylum to Evo Morales, when he and his family were threatened with imprisonment by the same security agencies who led his violent departure from power last November, it is not difficult to conclude that Fernández continues the line of support for Morales.

Another aspect to highlight is that the Añez government has postponed the presidential election in different ways, which could clean up the image of a government imposed after the terror and not by choice of the majority. In principle it is believed that Añez is not interested in elections because the support of the people is focused on the MAS party, which has been led by Morales since 1987 and, due to his disqualification by the de facto government, Luis Arce was chosen by the MAS to run for President.

Furthermore, it cannot be ignored that in less than eight months in power, the Añez administration has been embroiled in several corruption scandals and that after the scenario of a global pandemic, they have been impossible to hide. You can allude to the case of ventilators to name the one most covered by the media, which so far has put several government officials behind bars for being allegedly involved in the millionaire crime of buying ventilators at one price and billing them at another to defraud the State.

After this brief tour, it is understandable why Fernández turned off the broadcast and did not accept Jeanine Añez in the Mercosur summit, the representative of a government that since its inception has predominated with its individual interests over the well-being of the Bolivian people, under a colonial, dictatorial and corrupt gaze, which is expected to change with the upcoming presidential elections on September 6.

Leaving aside what happened with Fernández and Añez, the Clarín portal reported that the summit went “harmoniously” despite the differences that some of its members have with respect to the free trade agreement or on issues such as the role that Venezuela and Bolivia should have within Mercosur.