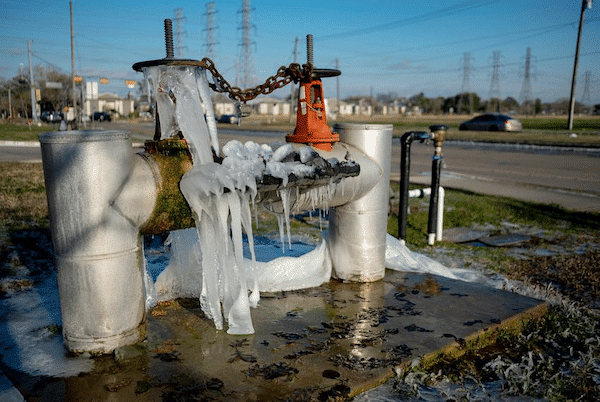 Lenin, who was a better economist than Rick Perry, once defined communism as “soviet power plus electrification of the whole country.” Competing with Stalin, the New Deal built dams and strung power lines in America’s backcountry. Lyndon Johnson, then a young congressman, got Roosevelt to help build the Mansfield Dam, which brought public power to the Texas hill country, and another, the Tom Miller dam, which brought it to the city of Austin.

Times changed. Texas grew and the cult of the free market took control of the state’s government. Economists lit the way forward. Electricity is the ultimate standard product, every jolt exactly like every other. Texas had a self-enclosed grid, cut off from interstate commerce and so is exempt from federal regulations. What better place to prove the virtues of a competitive, deregulated system?

Under New Deal-style regulations, electric utilities got a rate-of-return on their investment, governed by a utility commission that set and stabilized prices. It was (in principle) enough to cover construction and maintenance and a fair profit, not so much as to amount to monopoly profits; utilities were a stable but dull business, municipal socialism. Economists complained: there was an incentive, they said, for such utilities to over-invest. The bigger their operations, the higher their total costs, the more they could extract from the rate-setters.

What to do? Economists proposed a free market: let generating companies compete to deliver power to the consumer through the common electrical grid. Freely chosen contracts would govern the terms and the price. Competition would assure bare-bones, lean-and-mean efficiency, and low, low prices most of the time, reflecting the cost of fuel plus the smallest possible profit margin. The role of the state would be minimal–just to manage the common grid, through which power flows from the producer to the consumer. In times of shortage, prices might rise, but then the market would decide; those who did not wish to pay could always flip their switches off.

RELATED CONTENT: Will Biden be Able to Reverse the Decline in the US?

It was a perfect textbook setup, with supply on one side, demand on the other, and a neutral manager in between. True, there were a few loose ends. One is that demand for electricity is what economists call inelastic: it doesn’t respond much to price, but it does respond to changes in the weather, and at such times, of heat or cold, the demand becomes even more inelastic.

Another detail was that in an ordinary market, there can be some play in the relationship between supply and demand. If even a fishmonger does not sell his catch, he can, at the end of the day, cut his price–or even freeze the haddock for the following day. Electricity isn’t like that. Supply has to exactly equal demand every single minute of every single day. If it doesn’t, the entire system can fail.

This system, therefore, had three vulnerabilities. First, it created an incentive for cut-throat competition, to provide power in the cheapest possible way, which meant with machinery, wells, meters, pipes, and also windmills that were not insulated against extreme cold–a rarity but not unknown, even in Texas. Second, it left prices free to fluctuate. Third, it assured that when prices rose the most, that would be at exactly those moments when the demand for power was the greatest.

In 2002, under Governor Rick Perry, Texas deregulated its electricity system. After a few years, the electrical free market, managed by a non-profit called ERCOT, was fully-established. Some seventy or so providers eventually sprung up. While a few cities–including Austin–kept their public power, they were nevertheless tied to the state system.

The market system could, and did, work out most of the time. Prices rose and fell, and customers who didn’t sign long-term contracts faced some risk. One provider, called Griddy, had a special model: for $9.99 a month you could get your power at whatever the wholesale price was on any given day. That was cheap! Most of the time.

The problem with “most of the time” is that people need electric power all of the time. And Texas’s leaders knew as of 2011, at least, when the state went through a short, severe freeze, that the system was radically unstable in extreme weather. But they did nothing. To do something, they would have had to regulate the system. And they didn’t want to regulate the system, because the providers, a rich source of campaign funding, didn’t want to be regulated and to have to spend on weatherization that was not needed–most of the time. In 2020, even voluntary inspections were suspended, due to COVID-19.

Enter the deep freeze of 2021. Demand went up. Supply went down. Natural gas froze up at the wells, in the pipes, and at the generating plants. Unweatherized windmills also went off-line, a small part of the story. Since Texas is disconnected from the rest of the country, no reserves could be imported, and given the cold everywhere, there would have been none available anyway. There came a point, on Sunday, February 14 or the next day, when demand so outstripped supply that the entire Texas grid came within minutes of a collapse that, we are told, would have taken months to repair.

As this happened, the price mechanism failed completely. Wholesale prices rose a hundred-fold–but retail prices, under contract, did not, except for the unlucky customers of Griddy, who got socked with bills for thousands of dollars each day. ERCOT was therefore forced to cut power, which might have been tolerable, had it happened on a rolling basis across neighborhoods throughout the state. But this was impossible: you can’t cut power to hospitals, fire stations, and other critical facilities, or for that matter to high-rise downtown apartments reliant on elevators. So lights stayed on in some areas, and they stayed off–for days on end–in others. Selective socialism, one might call it.

When the lights go off and the heat goes down, water freezes and that was the next phase of the calamity. For when water freezes, pipes burst, and when pipes burst the water supply cannot keep up with the demand. So across Texas, water pressure is falling, as I type these words. Hospitals without water cannot generate steam, and therefore heat; and some of them are being evacuated right now. Meanwhile, ice is bearing down on the power lines.

For most of us, it’s a waiting game. We know the power will come back soon, just as it is no longer so desperately needed. We don’t know how long before water supplies are fully restored. Food is a matter of how well-prepared you were beforehand. Anyone without ready cash, anyone who relied on official information, anyone who just didn’t get out before the storm–all those anyones have a problem.

Rick Perry has reassured us that as Texans we’re prepared to sacrifice ourselves to avoid the curse of socialism. But it’s too late now. In the aftermath of this debacle, we will return to New Deal-style municipal socialism, or this disaster of power, water, and gas will happen again. Socialism is government, in technical matters, by engineers and others who know their stuff and not by ideologues who do not. Compared to Texas right now, it’s not such a bad prospect. In the USSR, despite all its other flaws and the Russian cold, the power and the heat did stay on. Even in the worst of the post-Soviet free-market collapse the Moscow metro, a triumph of municipal socialism, never stopped.